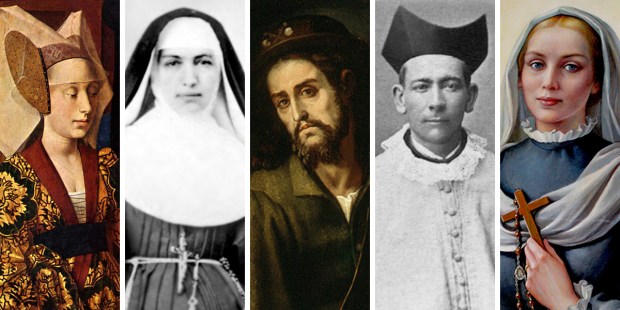 But even more, they know about how a pandemic can become a way to serve God and neighbor..

Finding a saint who worked with victims of plagues and other epidemics can be a struggle—because there are too many to count!

During the 3rd-century Plague of Cyprian (famous for killing upwards of 5,000 people a day in Rome), Christians were reported running toward sufferers, eager to nurse them whatever the cost. In Alexandria (where two thirds of the population was lost to this plague) St. Dionysius wrote of the Christians, “Heedless of danger, they took charge of the sick, attending to their every need and ministering to them in Christ, and with them departed this life serenely happy; for they were infected by others with the disease, drawing on themselves the sickness of their neighbors and cheerfully accepting their pains.”

In fact, so many Christians died nursing the sick in Alexandria, the group of unnamed heroes was awarded a feast day (February 28) and venerated as martyrs.

As coronavirus spreads around the globe, leaving many sick and many more frightened, we would do well to ask the intercession of those who fought plagues and epidemics and won halos in the process.

St. Godeberta of Noyon (c. 700) cared for the sick in a less direct way that many others. An abbess with great influence over the people who lived near her abbey, Godeberta encouraged them to pray for the end of a plague. After they spent three days fasting in sackcloth and ashes, the plague ended quite suddenly.

St. Roch (1295-1327) embarked on a pilgrimage to Rome when he was 20, begging all the way. When he arrived in Italy, he discovered a country ravaged by the plague. Roch set about caring for the sick strangers he came upon (often curing them miraculously) until he himself contracted the disease. Knowing nobody, Roch dragged himself to the forest to die, but a local dog brought him food and licked his wounds until Roch recovered.

St. Charles Borromeo (1538-1584) was a cardinal when famine and plague struck Milan. Though most nobles fled the city, Cardinal Borromeo organized the religious who remained to feed and care for the hungry and sick. They fed over 60,000 people a day, the bill largely footed by the Cardinal, who went into personal debt to feed the hungry. He also personally visited those suffering from plague and bathed their sores, having first written his will and prepared himself for death. But the good Cardinal was spared, living another six years after what would eventually be called “the Plague of St. Charles.”

Read more:
Pope prays for priests’ courage as they bring Eucharist to those who are sick

St. Henry Morse (1595-1645) was born an English Protestant but became a Jesuit priest and returned to England to serve covertly. Much of his work consisted in serving victims of the plague, both in the 1624 outbreak and again (after he had been banished from England but secretly returned) in 1635. In 1635-1636, Morse contracted the plague three times but recovered each time. When he was later captured, his work with plague victims was considered and he was released. The next time he was captured, there was no such clemency, and Morse was martyred.

St. Virginia Centurione Bracelli (1587-1651) was a wealthy widow when a plague broke out in Genoa. She housed many of the sick in her home; running out of space, she rented a vacant convent, then built more housing. Though the plague ended, Virginia’s hospital continued serving hundreds of sick people, and the religious order Virginia founded in the midst of all this continues to this day.

Bl. Peter Donders (1809-1887) was a Dutch Redemptorist priest who served in Suriname for 45 years. He fought for the rights of enslaved people, evangelized indigenous people, and nursed the sick during an epidemic (to which he briefly succumbed). He spent his last three decades serving in a leper colony and advocating with the authorities to obtain better care for his people.

St. Jose Brochero (1840-1914) was an Argentinean priest. Immediately after his ordination, Fr. Jose nursed the sick through a cholera epidemic and emerged unscathed. Then, to serve his parishioners, he built 125 miles of roads and connected his parish with mail and telegraph services and a railway line. Eventually, he contracted leprosy and began to go blind, after which he retired both from active ministry and from single-handedly building the infrastructure of the region. He had spent over 40 years serving as priest, nurse, lobbyist, carpenter, and construction worker.

St. Marianne Cope (1838-1918) answered the call of the king of Hawaii to bring her Sisters to Hawaii and serve the lepers alongside St. Damien of Molokai. Though many feared the disease then thought to be extremely contagious, Marianne assured her Sisters that not one of them would contract it. Through strict hygiene practices and a good amount of grace, the Sisters worked with the lepers of Molokai for nearly a century without one of them contracting the terrible disease.