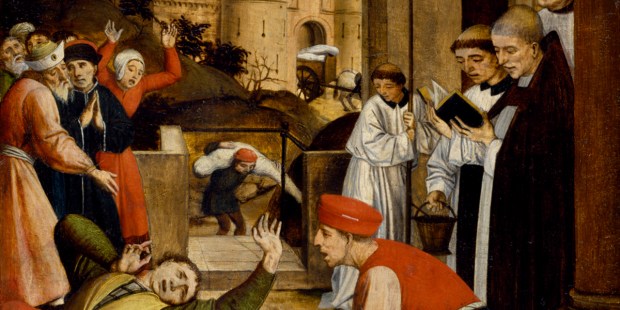 Christians added “pray for us now and at the hour of our death” in the midst of the Black Plague.

The “Hail Mary” prayer that Christians have been praying for centuries is composed of two main parts. The first part of the prayer is derived from the Annunciation, when the angel Gabriel greeted Mary by saying, “Hail, full of grace, the Lord is with you!” (Luke 1:28) The next part of the prayer is taken from the Visitation, when Elizabeth greeted Mary with the words, “Blessed are you among women, and blessed is the fruit of your womb!” (Luke 1:42)

Read more:
There’s a hidden prayer in the final petition of the Hail Mary

This second part (“Holy Mary, Mother of God, pray for us sinners now, and at the hour of our death”) is believed by many to have been added during the plague to ask for the Blessed Mother’s protection from the fatal disease.

Since it seizes upon the two decisive moments of life: “now” and “at the hour of our death,” it suggests the spontaneous outcry of people in a great calamity. The Black Death, which ravaged all Europe and wiped out one-third of its population, prompted the faithful to cry out to the Mother of Our Lord to protect them at a time when the present moment and death were almost one.

An expert in Marian devotion, Fr. Donald H. Calloway, confirms this conclusion in his book Champions of the Rosary and explains how, “After the Black Death, the second half of the Hail Mary began to appear in the breviaries of religious communities, especially those of the Mercedarians, Camaldolese, and Franciscans … the people of the 14th century greatly needed the ‘hope-filled’ dimension of the second half of the Hail Mary prayer.”

The prayer took various forms during this bleak period in Europe, but was officially recognized after the publication of the Catechism of the Council of Trent and the full prayer was then included in the Roman Breviary of 1568.

Read more:
When did Christians start praying the Hail Mary?