New Zealand Bishop’s ordination attended by his own deacon father 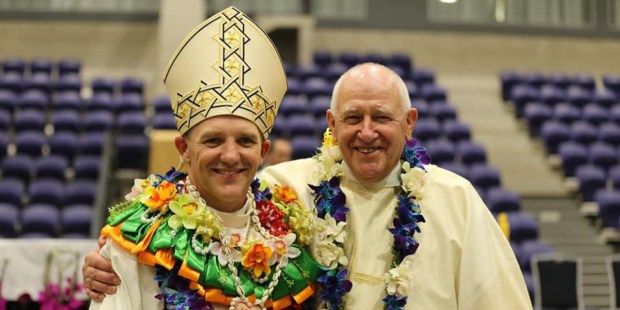 This was the first time a New Zealand deacon saw his son elevated.

A permanent deacon in New Zealand experienced a rare treat, when he was able to participate in the ordination Mass of his son, Auckland’s new Auxiliary Bishop Michael Gielen.

Michael Otto of CruxNow reports that the event, attended by over 3,000 people, was the first time a New Zealand deacon ever had such an honor. Deacon Henk Gielen was proud to be a part of the ceremony in which his eldest son was named a bishop of the Catholic Church.

During his first official speech as prelate, Bishop Gielen spoke of his faith’s influence in his formation as a person, and extolled the virtues of sharing faith as a family. He said that even as a boy he could recognize the positive changes changes within himself that his Catholic practices encouraged.

“I have good news,” Bishop Gielen said in his thanksgiving speech. “Whether you are 7 or 70, Jesus loves you,” the new bishop said. “Jesus will never leave you alone. Jesus has amazing things in life for you, whatever your age is, if you trust him and ask him into your life, like my family did. It’s amazing what he can do when we say, ‘yes.’ Thank you for your ‘yes,’ and let us travel together in our waka (Maori canoe), wherever God leads us.”

His father, Deacon Gielen, who read the Gospel during the Mass, said that this was the first time in New Zealand that a deacon’s son has risen to the rank of bishop. He said that the appointment came as a shock, but he seemed confident that Bishop Gielen would flourish in his new position. When asked if he had ever imagined that Michael would be named a bishop, he said:

“No father knows what will become of their children … But you love them and give them your best and hope they will flourish.” He added that his son was bound to be a good bishop, because “Michael has a heart for (the) less privileged and a heart of compassion.”

Archbishop Novatus Rugambwa, the papal nuncio to New Zealand, could not be at the ordination, as he has placed himself in quarantine for the next two weeks, fearing that he may have contracted COVID-19.