When was the last time churches in the U.S. were closed? 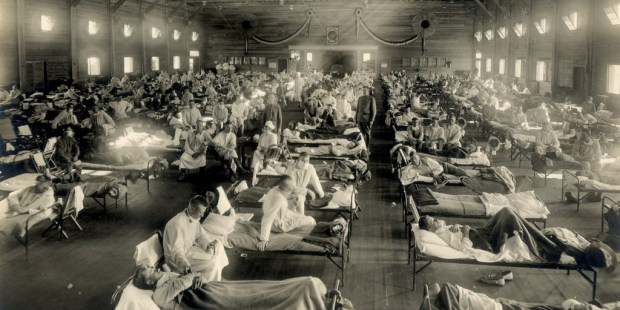 It’s difficult to find a precedent for the current suspension of public Masses, but St. Louis experienced this in 1918.

Catholic dioceses declaring a suspension of public Masses during the current health emergency seems to have little or no precedent in U.S. history.

By Thursday morning, pretty much every American Latin Catholic diocese and archdiocese, as well as Eastern Catholic eparchies, had instructed pastors that while they may and should continue to celebrate Mass privately, no congregants may be present. Churches may be open at times for the faithful to pray individually, but no gatherings should be allowed. Other Christian churches, synagogues, mosques and temples are also suspending services, as part of an effort to stem the spread of COVID-19 before the pandemic can overwhelm healthcare institutions.

“I don’t think there is a precedent,” said John T. McGreevy, the Francis A. McAnaney Professor of History at the University of Notre Dame. “I can imagine it happened in 1918 but know of no other precedents.”

1918 was the year another pandemic took hold of America — and the world. The so-called “Spanish Flu” claimed some 50 million lives worldwide — 675,000 in the United States. It was during that pandemic that at least one diocese responded to public officials’ request to shutter churches, to help prevent spread of the flu.

Elisabeth A. Eisele of KMOV in St. Louis prepared a report on the extraordinary measures taken by Max C. Starkloff, the St. Louis City Health Commissioner in 1918. It was in an Army barracks that St. Louis had its first influenza cases in early October of that year, and soon, city dwellers started getting sick. Starkloff “took aggressive action and began to shut down the city,” Eisele wrote. The health commissioner closed schools, theaters and places of amusement. He banned public gatherings of more than 20 people. Starkloff went on to close the court, playgrounds, library reading rooms, pool halls, and fraternal lodges. He limited the use of public transportation, and department stores operated under restricted hours.

“The following day, [Starkloff] closed churches for the first time in the city’s history,” Eisele wrote. “That earned him the ire of Archbishop John Glennon, who protested that decision, but he eventually temporarily suspended the weekly Mass obligation for Catholics.”

Missouri Medicine, journal of the Missouri State Medical Association, in a retrospective on the centennial of the 1918 influenza pandemic, wrote that churches eventually were allowed to reopen, with strict attendance limits.

“Fr. Frederick Holweck, pastor at St. Francis de Sales Church, was turned in to the St. Louis police after 200 parishioners were seen in his church, a violation of the city’s anti-crowding ordinance,” the journal wrote. “Fr. Holweck explained that many worshipers had sneaked in through the church’s side windows out of his view. Charges were not pressed.”

Missouri Medicine added that despite the severe restrictions placed on houses of worship, saloons were allowed to remain open throughout the epidemic (in both St. Louis and Kansas City), three months before the Volstead Act established prohibition.

The restrictions might have been annoying, but they resulted in St. Louis experiencing one of the lowest influenza rates of cities comparable to its size, Eisele wrote. “Of the 31,500 who got sick in St. Louis only 1,703 died.”

Compare that to Philadelphia, where 2,600 deaths alone were thought to be traced to a big public parade held the week before.