Pope calls bishop of Bergamo, one of hardest hit towns of Italy 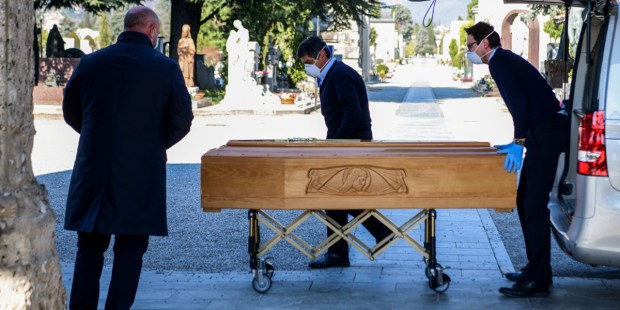 One priest recounts blessing bodies of the deceased, with loved ones connected via cell phone

Pope Francis called the bishop of Bergamo, the hometown of John XXIII, which has been one of the tows of Northern Italy most hit by COVID-19.

Bishop Francesco Beschi got the unexpected call on Wednesday morning.

“The Holy Father has been very caring, assuring his pastoral closeness with me, with the priests, with the sick, with those who care for them, and with our whole community. He wanted to ask me details about the situation here in Bergamo, which he was [already] well informed about.”

The bishop said Pope Francis was very moved by “the suffering from so many deaths, and the sense of unease that the families are forced to live, and in such a terrible way. He asked me to take to everyone his consoling blessing, a channel of grace, light, and strength.”

In particular, he asked the bishop to transmit his closeness to the sick, and to those who in various ways are doing a heroic job in their service to others: the doctors, nurses, civil and health authorities, and security forces.

The Bishop of Rome expressed his satisfaction with the heroic work of the priests, moved by the “number of dead and hospitalized,” but also moved by the “pastoral imagination with which they are inventing every possible way to be close to families, the elderly, and children, as a sign of the closeness of God himself.”

Read more:
The view from Bergamo, Italy, where at least 11 priests have died from the coronavirus

Francis promised to keep the priests and missionaries of Bergamo in his heart, praying for them daily. The bishop said the pope’s promise, “with his fatherly blessing, has been an echo, a continuation, a concrete manifestation for me — and I’m sure for the whole diocese and for all of us — of the affection of our saint, John XXIII, who we invoked yesterday in prayer.”

Bishop Beschi spoke of the 20 priests of his diocese who have been infected with coronavirus in the midst of their pastoral ministry. Some of those are in the hospital and others recovering at home. Six have died this week, the bishop recounted with emotion.

One example of the pastoral creativity that Francis spoke of is Brother Aquilino Apassiti, a priest who works in the John XXIII Hospital, where dozens are dying every day. The families, in quarantine, cannot visit the patients.

“The families of the dead call me. I place my cell phone beside the bodies of their loved ones, and we pray together,” the 84-year-old priest explained to InBlu Radio, a radio channel of the Italian bishops.

Brother Apassiti came back to Bergamo five years ago, after missionary work in Brazil. Following the guidelines given by the medical personnel, he’s moved into the chapel of the hospital, and makes visits from doorways where he is permitted.

The priest acknowledged the terrible difficulty of his work. He recounted how one woman, unable to say good-bye to her husband who had passed away, asked him to bless his body. “I blessed the body of her husband, I said a prayer, and then we both began to cry on the phone. An experience of sorrow upon sorrow. This is a time of great test.”