This woman with Down syndrome is running for public office 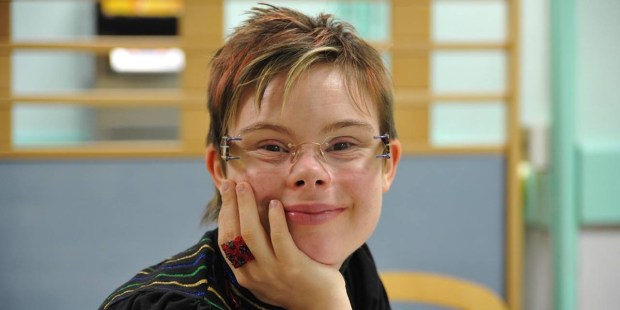 She’d get our vote, honestly.

Eléonore Laloux has been fighting for integration into society since she was a child. Now she’s competing in a whole new race: The 34-year-old French woman with Down syndrome is running for public office. She’s on the ticket of the incumbent mayor of her hometown of Arras, in northern France, in the municipal elections to be held this year.

She wants to make her town more accessible and fair, giving a voice to people with disabilities and defending their place in society. This is something she’s been doing as the head of the group “Les amis d’Elèonore” (The Friends of Eléonore) for the last 10 years. The group denounces to public authorities discriminatory acts against people with Down syndrome.

In 2014, she published her biography, “I have Down syndrome, so what?” (“Triso, et alors?”), written in collaboration with journalist Yann Barte. In it, she narrates how, starting in school, she learned to live independently, and how she managed to graduate from a secretarial course she attended with an assistant who supported her in the classroom.

She also devotes a chapter—called “I Am Not Poison”—to answering neurobiologist Jean-Didier Vincent who, participating in a television debate, said, “Why let people with Down syndrome live when they are poison for their families?”

In these pages, Eléonore defends not only the right to life of people with Down syndrome, but also their dignity as people, making it clear that they are not toxic citizens. She also denounces the violent and negative discourse about Down syndrome that some doctors employ and defend.

A year before the publication of the book, she released a video in which she responded to the neurobiologist, saying, “People with Down syndrome are born like the rest, and live like the rest.” Therefore, she says, they have the same rights.

“I accept myself as I am,” says Eléonore. This attitude is surely the fruit, to some extent, of the way she was raised by her parents, who played a very important role in her childhood and youth, and as she acquired autonomy and independence.

Today, she lives alone, is financially independent, and works as an assistant secretary for the UpDown Association. Eléonore is, without a doubt, an example of hard work, effort, and tenacity. She continues to show these qualities in her work for the inclusion of people who, like her, have Down syndrome.

On March 18, the film I’ll Go to the Moon (“J’irais décrocher la lune”) by Lauret Boileau will be released in France. In it, Eléonore has a chance to share her story, along with five other people.

Eléonore takes every opportunity to show the world that you set your own limits, and that barriers can be broken.

Read more:
9 People with Down syndrome who are changing the world

Read more:
These Instagram accounts show another side of living with Down syndrome