Coronavirus pandemic seems to be having cleansing effect on environment 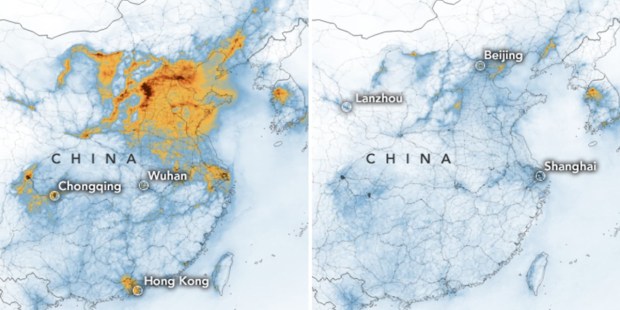 In China, air pollution is down a quarter to a third in some places.

As life slows down in response to the COVID-19 pandemic, the environment seems to be getting a breather.

In China, where the novel coronavirus first appeared last December, air pollution is down a quarter to a third in some places, due to both a decrease in cars on the road and the shutdown of factories, many of which burn coal for power.

“China is the largest emitter of greenhouse gases in the world. So even that short period of time in China equals what a state like Illinois or Ohio emits in an entire yea,” said Lauren Sommer of National Public Radio.

The Washington Post analyzed data from the European Space Agency’s Sentinel-5P satellite, which can measure concentrations of greenhouse gases and other pollutants in the lower atmosphere. Between January 1 and March 12, concentrations of nitrogen dioxide, or NO2, fell drastically, especially over hard-hit northern Italy, it showed. NO2 is a pollutant that can increase the risk of asthma, inflammation of the lungs and other harmful health conditions, the Post said.

More than half of Italy’s cars burn diesel.

According to the BBC, data collected in New York recently suggests that instructions to curb unnecessary travel are having a significant impact.

“Traffic levels in the city were estimated to be down 35% compared with a year ago,” the British news agency said. “Emissions of carbon monoxide, mainly due to cars and trucks, have fallen by around 50% for a couple of days this week according to researchers at Columbia University.”

The researchers also found that there was a 5%-10% drop in CO2 over New York, as well as a significant drop in methane.

“New York has had exceptionally high carbon monoxide numbers for the last year and a half,” Columbia Professor Róisín Commane told the BBC. “And this is the cleanest I have ever seen it. It’s less than half of what we normally see in March.”

But while the drop in air pollution was widely welcomed, commentators acknowledged that it’s the result of unfortunate circumstances.

In addition, at least one expert said the situation shows the kind of world climate activists would be content with.

“There’s no question that CO2 emissions and other real pollutants — nitrogen oxide, black carbon soot, ozone — are down. But that doesn’t show that humans are causing or not causing climate change,” said H. Sterling Burnett, Ph.D. a senior fellow on environmental policy at the Heartland Institute and the managing editor of Environment & Climate News. “I think we have to look around and see that everyone is scrambling as hard as they can to get the economy going again, to get people working again, to fill the shelves. That tells me that what the environmentalists have been calling for for 30 years, people don’t want. In the end, we like having store shelves filled, we like being able to go to theaters and restaurants, we like being able to travel. All those things that environmentalists have condemned, telling us we should live with hair shirts, we’re rejected them. All those world leaders that signed the Paris Climate Agreement are doing everything they can to get their economy going again.”

Burnett said in an interview that there have been university professors who have urged a 90% reduction in world population, “and the best way to do that is a disease.”

While the pandemic has led to a temporary decline in global CO2 emissions, experts warn that the economic crisis poses a threat to long-term climate change action by compromising global investments in clean energy and weakening industry environmental goals to reduce emissions, CNBC reported.

“If the global economy crashes, emissions will drop short term as we produce fewer goods, but climate action will slow. Employment trumps environment in politics,” said Rob Jackson, a professor of Earth system science at Stanford University and chairman of the Global Carbon Project. “If companies are hurting, they may delay or even cancel climate-friendly policies that require investments up front.”

Yet another aspect of the crisis comes from the greater use of disposable medical supplies such as face masks, protective clothing and latex gloves. According to a Reuters report in mid-March, discarded face masks were piling up on Hong Kong’s beaches and nature trails, with environmental groups warning that the waste is posing a huge threat to marine life and wildlife habitats.

Finally, the inherent human need for good news in a distressing time was leading to a fair amount of exaggeration — fake news, actually. Viral posts on social media showed swans and dolphins returning to deserted Venetian canals. But the swans were actually photographed in the canals of Burano, a small island in the greater Venice metropolitan area, where they normally are. The dolphins were filmed at a port in Sardinia, hundreds of miles away, according to National Geographic.