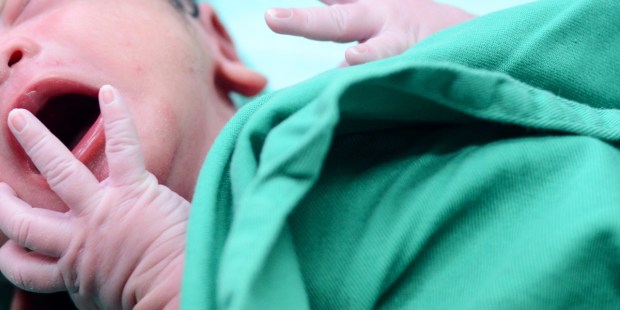 Huge advances in science and technology have made it possible to save the lives of the smallest among us.

In February, at the Women and Children’s Hospital of Borgo Trento, in Verona, northern Italy, Giulia was born weighing seven and a quarter pounds. The little girl is doing well, which is remarkable given her history: Baby Giulia was diagnosed in the womb with a 3.15 inch tumor that was crushing her trachea, and which wouldn’t allow her to breathe on her own once she was born.

A team of 25 doctors and nurses followed the child’s condition closely and practiced for the operation in preparation for her eventual birth. They had to carry out an emergency intervention, however, two days before her scheduled C-section—planned for Monday, February 17—because her mother’s water broke early.

At two o’clock in the morning, the team got ready to assist Baby Giulia and her mother (whose name has not been revealed to the press). Even doctors who were off duty went immediately to the hospital. The team used a sophisticated technique called EXIT, managing to intubate Giulia while she was still in the womb—but with her arm and head outside of the uterus, and therefore receiving oxygen from the placenta.

Some unborn children are diagnosed with conditions that make it difficult or impossible for them to breathe outside the womb on their own. These can include tumors in their necks or lungs, hernias in their diaphragms, congenital heart diseases, etc. If doctors wait to operate until the child is born, there is a risk that the newborn will suffer oxygen deprivation, causing brain damage or even death.

In response to this problem, doctors have developed EXIT—“Ex Utero Intrapartum Therapy”—which consists of performing a partial c-section, but leaving the placenta and umbilical cord intact so the baby continues to receive oxygen from his or her mother, while surgeons intervene to open an airway by intubating the infant. In some cases, the doctors may even operate at that very moment to resolve the issue, depending on the case.

In Giulia’s case, according to L’Arena, the doctors were able to remove part of the tumor immediately while only Giulia’s head and arm were outside the uterus, so she would be able to breathe independently after birth.

Little Giulia is fine now, but she will need a lot of care and follow-up surgery. Thanks to God and the extraordinary doctors who assisted her, her medical team is confident she now has a healthy future.

Today the technical advances in medicine make it possible to save the lives of children still in the womb, even with very serious issues that would certainly have been fatal in the past. In many of these cases, in addition to the technological aspects, great teamwork is fundamental. Many professionals must work together closely to achieve the desired result.

Prof. Massimo Franchi, who led the team during the delicate operation, said in an interview with Italian news service TGCOM24 that the procedure was “a success made possible by great teamwork, and before that, by the preparation of the operation.” Thank God for the healing of this little girl, and for the scientific advancements  that have made it possible.