7 Little-known saints who were medical professionals 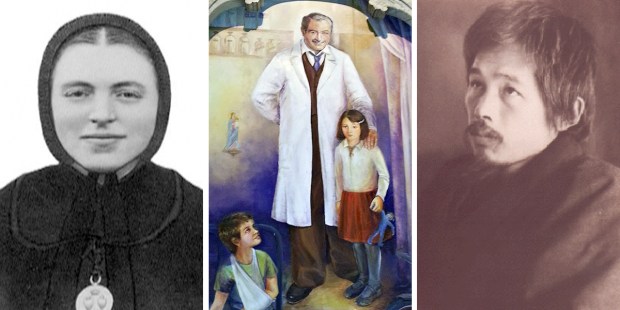 There are so many saints who were doctors and nurses that you’ll never get to know them all. Meet these 7.

There are countless saints who have been medical professionals, from St. Luke the Evangelist down to St. Gianna Molla. But during a time when our medical professionals are being tried beyond human capacity, it can’t hurt to get to know a few more medical intercessors, particularly those who cared for the sick in impossible situations.

St. Anthony Nguyễn Hữu Quỳnh (1768-1840) was a soldier, husband, father, doctor, philanthropist, catechist, and martyr. Throughout his medical career he treated the poor for free, and his generosity in nursing the sick during a cholera epidemic and paying for the medicine they needed led his bishop to appoint him catechist of his village, head of religious life in the absence of a priest. When Quỳnh was arrested at 72, he continued to practice medicine in prison, prescribing medications that healed his jailer’s wife and treating persecuting officials as well as other inmates. As he went to his execution he thanked God for the gift of martyrdom—and smoked one last cigarette before being killed.

St. Maria Bertilla Boscardin (1888-1922) wasn’t very bright. She was ridiculed by family, classmates, and even her pastor. But her religious superiors discovered that (though unintelligent and illiterate) she was a brilliant nurse. Children who were wild with fear calmed almost instantly before her. She was courageous as well as being kind and talented; when air raids threatened the hospital in World War I, Boscardin insisted on staying with the patients who could not be moved. At one point, a jealous superior moved her to the laundry. Within four months, Boscardin had been returned to the hospital and made ward supervisor. She served as a nurse (in spite of the judgment and jealousy of others) until she died of cancer at 34.

Bl. Liduina Meneguzzi (1901-1941) was a Salesian nurse in an Ethiopian hospital. From the day she arrived, the people (of every race and religion) were drawn to her, recognizing that she cared for them as she would have cared for Jesus. So when the bombings began during World War II, her name was on every patient’s lips. During the worst of the bombing, when others fled or hid, Meneguzzi could be seen carrying the wounded to shelter, baptizing dying children, and helping dying Christians to make an act of contrition. Though she survived the bombing, Meneguzzi died of cancer long before the war was over.

Bl. Artemide Zatti (1880-1951) was an Italian Argentine pharmacist and hospital administrator. A Salesian Brother, Zatti was assigned to care for a priest with tuberculosis, which Zatti promptly contracted but from which he was miraculously healed. Though he had no degree, Artemide ran the pharmacy of the hospital where he was assigned and gradually began nursing the patients. He had the hospital entirely rebuilt and outfitted with the most updated equipment, all by riding his bike around town asking for donations. Eventually Artemide obtained a degree as a pharmacist, but still rose at 4:30 each day to spend the morning in prayer, rode his bicycle around town to visit the sick, and visited sick patients when called in the night—all while directing the hospital as its chief administrator.

Servant of God Takashi Nagai (1908-1951) served as a surgeon in the Sino-Japanese War, which taught him to work fast in the midst of chaos. After the war, he finished his medical training and became a radiologist, but was called back into the carnage of war when air raids struck Nagasaki. On August 9, 1945, Nagai rushed into the streets after the atom bomb hit. For days, he served the thousands of horrifically wounded people, not yet knowing that his wife had been killed in the bombing. After publishing several books of poetry, Nagai eventually died of radiation poisoning.

Bl. Maria Troncatti (1883-1969) was a Salesian Sister who served as a nurse in Italy in World War I, daily dealing with the destruction wrought on soldiers. After that, she sailed for Ecuador, where her first sojourn into the jungle found her forced (at the tip of a spear) to perform surgery on a wounded indigenous woman. Miraculously, Troncatti was successful and, having won the people’s trust, spent the next 45 years evangelizing the jungle while providing medical care and training native nurses.

Ven. Giuseppe Ambrosoli (1923-1987) was an Italian priest who was sent as a missionary doctor to Uganda. There, he set about building a hospital, digging stones out of the ground with his own two hands and personally supervising the brickmaking. He also built a school of midwifery, returning to Europe only for training and fundraising. His work in Uganda was beset by a lack of resources, including a scarcity of blood, which Ambrosoli himself donated whenever possible. Ambrosoli’s endurance was astonishing as he worked unimaginably long days, but he eventually wore himself out and died at 63. He’s set to be beatified in November of this year.

Read more:
Pope: Midwives might have the most noble of all professions