An inspiring read for these times of pandemic by St. John Paul II 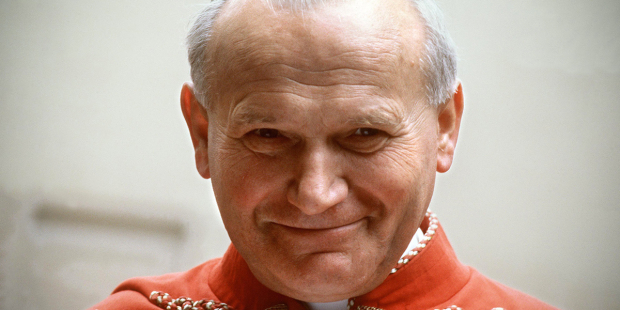 Karol Wojtyła stored the manuscript in a drawer. In it, he shares a reflection on St. Paul’s speech to the Athenians and touches upon many of the themes that we later came to know as the hallmarks of his pontificate.

Pope John Paul II makes news again. A book has just been published for the first time, the content of which until now was not available to the public in English, and which could be revealing.

These are reflections that Karol Wojtyła wrote when he was archbishop of Kraków, more than 50 years ago, but “they seem to be written for our days”, in the words of Jaymie Stuart Wolfe, Senior Editor at Ave Maria Press, the American publisher that takes up the challenge in these times of coronavirus pandemic.

The manuscript, now available in print and digital versions, is titled “Teachings for an Unbelieving World: Newly Discovered Reflections on Paul’s Sermon at the Areopagus”.

As the title announces, the text of the future Pope John Paul II and later Saint John Paul, presents a teaching of the thinker and pastor Wojtyła based on the speech of Saint Paul at the Areopagus, in Athens, as recounted in chapter 17 of the Acts of the Apostles.

The original manuscript was handwritten by the then Archbishop of Kraków and occupies 39 pages in black ink. It was stored in a drawer and has not been dated precisely. “We deduce” – Wolfe points out – “that he wrote it after the conclusion of the Second Vatican Council in December 1965, as he quotes the Vatican II documents.” This period beautifully converged with the commemoration of the 1,000 years of Christianity in Poland, his native land, which took place in 1966.

The figure of Saint John Paul has been presented as that of a philosopher and theologian who at the same time had the charism of reaching a multitude of people with his words and works. It was with great energy that he led the Catholic Church and undertook a great apostolic expansion in five continents. With trips to 129 countries, he was the traveling pope.

Points in common with Saint Paul

There are many points in common with Saint Paul. “Teachings for an Unbelieving World” reaffirms that likeness since in the manuscript of the Archbishop of Kraków, he takes the Apostle of the Gentiles’ speech and makes it a relevant and inspiring read.

Fundamental themes of his papacy

In the editor’s opinion, the manuscript “is an extended meditation, in which things that will be fundamental themes of the papacy of John Paul II start to appear: human love, freedom, truth, the dignity of the human person, the power of the Eucharist, the place of men and women in Creation, the importance of prayer, the grace of the Holy Spirit … and all these questions are raised in the context of a skeptical world”.

“Totally relevant to the situation we are going through”

It is amazing for Wolfe what Saint John Paul does with Saint Paul’s address to the Athenians: “It is as if he were unpacking the content of what the Apostle said in that instance and making it applicable to the contemporary world. It is totally appropriate for the times that we are living through.”

Wolfe explains that “Saint John Paul knew how to see beyond the apparent failure of the Apostle before the intellectuals and leaders of Greek culture. Saint Paul did not obtain many conversions nor were the Athenian elite impressed by his message; as we know, there is no Pauline Letter to the Athenians!”

“However,” she adds, “Karol Wojtyła, then Archbishop of Kraków, does not see in Paul’s encounter the proof of a failure but the gospel of Christ framed for a world that moves in skepticism and disbelief. It fits with the needs of our contemporary world”.

Accesible reading for the general public

Regarding the public to whom this text may be of interest, Jaymie Stuart Wolfe comments that “Saint John Paul has texts of great philosophical depth that may be difficult for an average reader to access, but in this case we find rather a text of catecheses, more for the common believer. I think it can reach all kinds of audiences”.

May 18th, 2020 will mark 100 years since the birth of Saint John Paul II. Wolfe values this new book as “a gift from the saintly pope who can help us at this time. When the isolation stage is over, we will have to return to the world. This book has great wisdom for that venture and can teach us how to return to a world with little faith. It will guide us to learn with what attitudes and understandings we can face the challenges that arise and what it really means to live and proclaim the faith in today’s world.”

The book features an introduction by Scott Hahn, a converted Catholic Biblical theologian and author, and a foreword by George Weigel, author of the bestseller “Witness of Hope”, the definitive biography of John Paul II.

You may purchase the book by clicking on the following links:

A free downloadable study guide is available on the Ave Maria Press website at the link below: 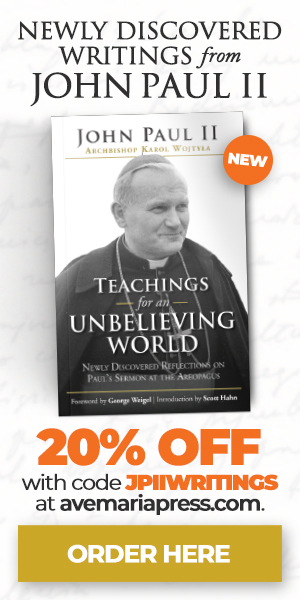