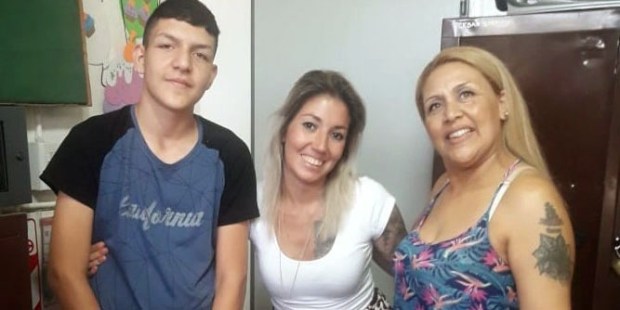 Professional athletes are among those who stepped up and made it possible for the young teen to stay in school.

Teachers are everyday heroes, but every now and then, one goes above and beyond. That’s what happened when a young man in Argentina had an unusual, but critical, need.

No local stores carry shoes in his size, and if his mother does find some, they’re prohibitively expensive for the family. Nahuel has to go barefoot, or wear shoes that are too small for him and have been adapted as best as possible by a local shoe repairman.

His teacher, Nadia Flores, decided to help him. She started brainstorming with her boyfriend about how to get Nahuel back to school, and she decided to post a request for help on Twitter:

“Calling for solidarity, those of you with size 48.5 sneakers, my student is literally attending class barefoot because his family cannot afford the cost (you know that only a few brands make shoes up to those sizes). Thank you very much.”

The response was immediate. The post was retweeted more than 1,500 times. The store PalaciosYPalacios—which specializes in clothing for tall people and which clothes former NBA and Real Madrid Olympic champions, including Andres Nocioni—asked for the young man’s address and arranged a shipment of shoes.

Sports journalist Carlos Altamirano, who covers basketball for DirecTV and DeporTV, responded as well. He told the teacher that he’d spoken to Fabricio Oberto, an Olympic gold medalist and NBA champion with the San Antonio Spurs, and that the athlete would also send footwear for the teen.

As Nahuel’s mother told Argentine news outlet MDZ, even Emanuel Ginóbili, one of the greatest Argentine sportsmen of all times and often considered one of the 100 best basketball players in history, voiced his support and commitment to help. Various athletes and teams from different parts of the country also offered to assist as needed.

Nahuel suffers from acromegaly, a hormonal disorder in which the pituitary gland produces an excess of growth hormones. It usually affects adults, but can also present itself in teens. It requires prompt medical attention, but proper monitoring and treatment—not to mention clothing adjustments—can allow people with this disorder to lead a normal life. Some of those who have suffered from it have played in the NBA.

Nahuel’s family and teacher were quick to express their gratitude on social networks for the wave of solidarity that allowed Nahuel to attend school normally. Nadia Flores tweeted,

“Thanks to all the people who wrote to me and want to collaborate, I don’t know how to explain the wonderful feeling of feeling that we are still people. Thank you, because now one more kid is in school.”

The outpouring of support for Nahuel reminds us of how connected we are as God’s children. Helping just one person can change not just that person’s life but all those who witness it. Little by little, with small acts of generous kindness, we can change the world.