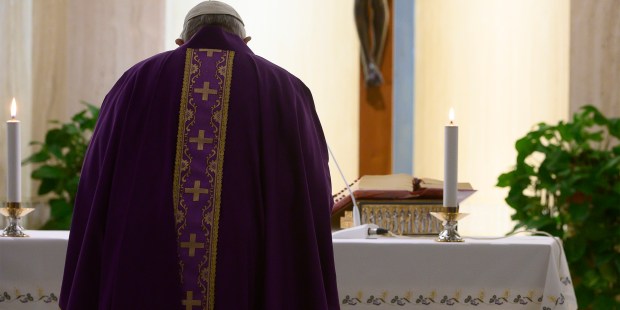 Pope Francis urges us to remember that we are chosen by God and to respond with faithfulness.

Pope Francis offered his morning Mass on April 2 for the homeless, noting how these days of “sorrow and sadness” are bringing to light problems that are often hidden from view. He mentioned a photo in the day’s newspaper that shows the homeless sleeping on the cold pavement of a parking lot.

We pray to St. Teresa of Calcutta that a sense of closeness might awaken in us – closeness to so many people in society, in normal life, who live hidden, such as the homeless, who in a moment of crisis stand out.

The pope’s homily focused on how God has chosen us to be his own.

The Lord has always remembered his covenant. We repeat in in the Responsorial Psalm. The Lord never forgets, never forgets. Well, he only forgets in one situation: when he forgives sin. After forgiving, he ‘loses his memory,’ he doesn’t remember the sins. But in all other cases, God doesn’t forget. His fidelity is memory. His fidelity to his people.

Drawing from the First Reading, the pope spoke about the grace of being Christian: “We are Christians because we have been chosen. In this choosing, there is a promise. There is a promise of hope, and the sign is fruitfulness … Your faith will bloom in works, in good works.”

But in being chosen and in giving fruit, we must respond with our fidelity, the pope continued. “The covenant is fidelity, being faithful. We have been chosen, the Lord has given us a promise, and now he asks us for a covenant. A covenant of fidelity.”

Sin is always contrary to these three dimensions, Francis said. Not accepting that God has chosen us, and on the contrary, we ourselves choosing “so many idols, so many things that are not of God.” Or not accepting the hope in the promise, or living as if we did not have a covenant with God.

But “fruitfulness is joy, this joy that Abraham saw,” as Jesus says in the Gospel: “Abraham your father rejoiced to see my day; he saw it and was glad.”

This is the revelation that the Word of God gives us today about our Christian existence. May it be like that of our father: aware of being chosen, joyful in going toward a promise, and faithful in fulfilling the covenant.

Read more:
Pope Francis to Jewish Rabbis: “God is the greatest and most faithful covenantal partner”