Mass on TV, or a celebration at home? 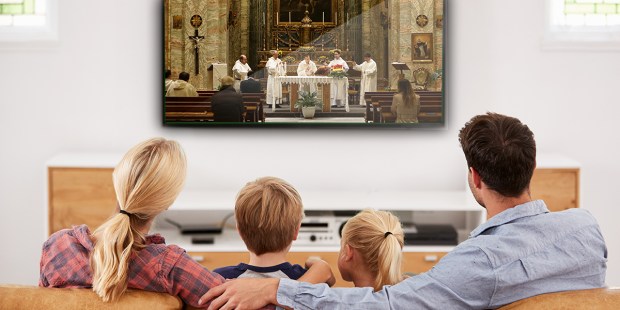 How to keep Sunday holy, and Holy Week and Easter from home

When it is not possible to participate in Sunday Mass, what is more appropriate: to participate in a humble celebration of the Word at home, or to follow the Mass on television, perhaps presided over by the pope at St. Peter’s Basilica with a wonderful choir? Without taking anything away from the precious consolation that the Mass broadcast on television can bring us, the answer is clear: the celebration of the Word is better.

How can this be? When several people gather in the name of Jesus Christ to celebrate His Word, with the intention of being one heart and one spirit with His Church, they’re taking advantage of the effects of two promises—one formulated by Jesus Himself, and the other by His Church.

The first promise is from Jesus: “Where two or three are gathered in my name, I am present with them” (Matthew 18:20).  When in this time of confinement we gather at home to celebrate His Word, there is no doubt that Jesus Christ is present among us.

The second promise is from the Church. Indeed, the Second Vatican Council (principally, among other sources) teaches us that when we gather to read Scripture in the Church, the very Word of God is speaking to us, Jesus Christ. His Word, then, becomes authentic food for our life.

But how can we know that we are celebrating “in the Church”? When we broaden the horizon of our “assembly” to the horizons of the Church and the world, and when we follow the liturgical formulas that the Church recommends for these celebrations of the word.

“Make your house a Church”

And if, in addition, the assembly gathered at home (two or more persons) is made up of members of the family, it truly constitutes part of the Church by the grace of the domestic Church (cf. Lumen Gentium 11, Familiaris Consortio 21). What is the domestic Church? The family. “It is here that the father of the family, the mother, children, and all members of the family exercise the priesthood of the baptized in a privileged way,” explains the Catechism of the Catholic Church in number 1657. “Here one learns endurance and the joy of work, fraternal love, generous—even repeated—forgiveness, and above all divine worship in prayer and the offering of one’s life.”

Let us not, therefore, fail to heed the words of St. John Chrysostom, who advised the father of a family: “Make your house a church.”

The domestic Church, the secret of the Korean miracle

Catechism and family celebrations of the Word are the secret of the Korean miracle. The birth of the Church in Korea was already a miracle. The faith was not announced first by missionaries, but was discovered at the end of the 18th century by a philosopher, Lee Byeok, and a group of friends; books in Chinese fell into their hands, presenting the Christian faith, probably written by Matteo Ricci. After many vicissitudes, the first missionary priest arrived in Korea in 1836, 50 years after the first baptism of a Korean. At that time, the country already had some 20,000 Christians.

In 1845, the first Korean priest, Andrew Kim, was ordained. He died during the great persecution of 1846. From that moment on, the persecutions did not stop for a century, including the period of Japanese rule. In spite of having neither bishops nor priests, the Christian community not only survived, but even grew. What a surprise it was for the priests who entered the country in 1945, after the liberation of Korea! They discovered a dynamic Catholic community, whose members had memorized the catechism, the great prayers, and even the responses of the faithful to the Mass, even though the Mass had not been celebrated there for a hundred years.

The Mass on television, a precious consolation

The Mass on television remains at least an irreplaceable treasure for the lonely, the sick and the elderly. Those who follow the Mass on television are invited to unite themselves wholeheartedly in communion with the Church. They listen to the Word of God and can meditate on it. They can receive spiritual communion. In this way, in times of confinement, the Mass broadcast on television or the internet becomes a great comfort to many people.

At the same time, it’s clear that the Mass on television or on the internet does not replace the actual Mass. It’s an essential matter, not an accidental one. Under normal circumstances, when it’s possible to go to a real Mass, we must go to Mass. Watching Mass on TV, even if the Pope is the one celebrating it, is not the same as participating in the sacrament at the parish.

Christianity, the religion of the incarnation

The following comparison can help us understand this. Watching a chef prepare a wonderful dinner on TV for his guests is all very well, but it’s not at all the same as being one of the guests at that table and participating in their conversation.

As Fr. Pierre Amar explains, “what we see on TV or on the internet (today, many priests record the masses they celebrate in private), even if it is transmitted live, is NOT reality: it’s a picture of reality.” By contrast, a celebration of the Word, however humble, is something real.

Fr. Amar adds: “Christians are believers in Encounter. God became flesh, He became incarnate, He took on a body and a face. When He wanted to save the world, He sent His Son, with blood, sweat and tears. He did not send a letter, nor a message … nor an e-mail!” Not even a live television broadcast.