Rosary Shrine in London can now be visited through VR technology 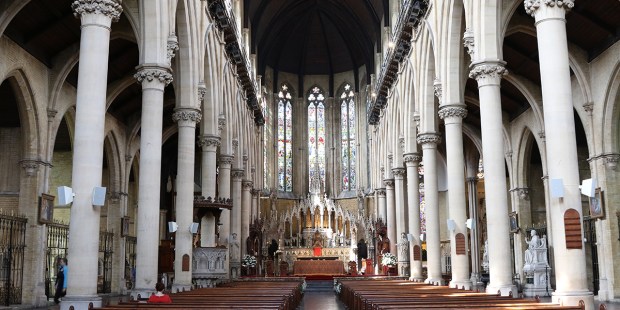 Virtual tour was planned long before pandemic, but now is helping millions pray and find consolation.

The Rosary Shrine in London was inspired by the Blessed Virgin Mary’s apparitions at Lourdes. And Lourdes is known as a place of healing, a destination especially for the hopelessly ill.

But neither Lourdes nor the London Rosary Shrine have escaped the effects of the current illness tearing through the world. The pilgrimage site in southern France closed its healing baths at first, and later the entire shrine was shut to visitors.

And the London shrine, like most churches in countries where the COVID-19 pandemic has gained a strong foothold, has suspended public services.

Our Lady of the Rosary and St. Dominic, as the shrine in northwest London is called, has long been a place of comfort and consolation, where pilgrims can pray the Rosary in successive side chapels, each dedicated to a different mystery. Now, at at time when more and more people are turning to the ancient beaded prayer, personal visits are impossible.

Thanks to virtual reality technology, however, not only can parishioners “visit” their beloved church and pray there through the internet, so can people around the world.

Plans for developing a virtual reality version of the shrine began long before the first case of the novel coronavirus showed up in Wuhan, China, however. Amy Giuliano, an American Catholic, contacted Dominican Fr. Lawrence Lew, rector of the shrine, in early 2019 because she admired his photographic work of sacred architecture.

“As a former tour guide to the churches of Rome, Amy knew the power of this beauty as a way that leads to the truths of the Faith,” Fr. Lew told Aleteia. “So, she introduced me to her work, which she’d been trained to do at Yale, namely, to produce highly-professional and sophisticated VR tours. Her idea was that ‘an unprecedented number of people can personally explore the Church’s artistic patrimony through this new media.”

Giuliano runs VADIS VR, which creates virtual tours of the Church’s artistic patrimony around the world to “provide access to extraordinary sites that many would otherwise never see, and to catechize through embedded audio-visual content about the site and its art,” she said. She told Fr. Lew that she was planning to be in Europe, and he invited her to check out the shrine. She visited just before the feast of the Annunciation in 2019 and recorded the church for a virtual presentation.

Before debuting the VR tour, Fr. Lew wanted to add other features, such as videos, audio files, commentaries and prayers. But because of other commitments, including his “other hat” as Promoter General of the Holy Rosary for the Order of Preachers worldwide, he put it on the back burner.

He was inspired to revive the project, however, when the bishops of England and Wales rededicated the country to the Blessed Virgin Mary. By this time, the World Health Organization had designated the spread of COVID-19 as a pandemic, and the Rosary Shrine was closed, like so many other churches, and the rededication ceremony had to be done without a gathering of the faithful. As Fr. Lew watched the ceremonies online, livestreamed from the Walsingham Basilica on March 29, he remembered Giuliano’s work.

”The next day, I looked at it again, and as I marveled at the detail and realism of the virtual reality model, I realized that this was an answer to our current needs,” he said. “The VR tour, I realized, would offer our parishioners and pilgrims — many of whom are deeply saddened by the closure of our churches — a chance to virtually visit the church. I hoped that the VR tour would give them comfort so that they could virtually come in and pray in their favorite spots, or pray the Rosary in each of the Rosary chapels, or just stand before the Altar of Our Lady of the Rosary.

“Following on from the Marian Rededication of England, I felt called to virtually open up this Marian Shrine in London, the nation’s capital, to the people of England, and indeed to the wider world,” the priest continued. “For we are all living in these distressing times, when we cannot go to church, nor access the Sacraments easily. I hope that this VR tour will make it possible to be embraced and comforted by the Mother of God at this time.”

Like the rededication at Walsingham, Fr. Lew said, offering a virtual visit of the Rosary shrine is a reminder of a special relationship the faithful have with the Mother of God.

”For some time, I have been conscious of Our Lady’s protection, and of the importance of the Rosary in the modern world,” said the Dominican friar. “Having just returned from a pilgrimage to Fatima, the instructions of Our Lady of the Rosary at Fatima were vividly impressed on my soul: Pray the Rosary every day.”

The Rosary Shrine is part of an eight-century history of Dominican presence in England. The friars came to London almost 800 years years ago, in 1223, though their work there was interrupted by the Reformation.

After the Catholic emancipation and the influx of Catholic immigrants in the mid-19th century, Cardinal Nicholas Wiseman invited the Order of Preachers to take over a mission in London. The foundation stone of their new priory there was blessed on the Feast of the Transfiguration in 1863. There was a temporary church there for a while, but when a man named Thomas Walmesley from Tunbridge Wells proposed building a church in honor of Our Lady of Lourdes, “to mark the gratitude of the Catholics of the United Kingdom for the many graces and blessings received through Our Lady of Lourdes,” the Dominicans, who have a special devotion to the Rosary, readily agreed.

Since the devotion at Lourdes is the Rosary, the title of the Church would be “Our Lady of the Rosary” and its structure would reflect the structure of the Rosary. Within the Church, there would be 14 side-chapels, each dedicated to a mystery of the Rosary, with the final 15th mystery, the crowning of Our Lady as Queen of Heaven, commemorated in the stained glass window above the high altar.

This was, of course, over a century before Pope John Paul II introduced the Luminous Mysteries into the Rosary.

”Recently, for the sake of our visitors to the Shrine, we also established a Rosary Garden behind the Lady Chapel, and the Luminous Mysteries introduced by Pope St. John Paul II in 2002 are commemorated in that garden, together with a specially commissioned statue of Our Lady of Cana,” said Fr. Lew.

The original plan also called for a life-size replica of the grotto at Lourdes to be built in a more spacious side-chapel. Walmesley hoped the new church would become a great center of pilgrimage and would rival even Walsingham in popularity. “All that is needed to make it so is the devotion of the faithful,” he wrote. “Prayers can do more than the architect. May our hopes be realized.”

Pilgrimages began soon after the church’s dedication in 1883. The Lourdes grotto was completed in 1914.

In March 2016, during the Jubilee Year celebrating 800 years of the Dominican Order, the Archbishop of Westminster, Cardinal Vincent Nichols, announced that he would confer on the church the status of diocesan shrine, with a mission to promote the Rosary.

Fr. Lew believes that the Church of St. Dominic and Our Lady of the Rosary is unique in two ways. First, it is the first church in the world to have distinct chapels dedicated to each of the traditional Mysteries of the Rosary.

”Visitors, either virtually or in person, are invited to pray the Rosary standing in front of each Rosary Altar with its artistic depiction of each mystery, and moving from one chapel to the next,” he said. ”They can then contemplate these aspects of our salvation through art, praying with sacred art, and being led along the ’way of beauty’ to Christ, who is Beauty made flesh. This stational or processional manner of praying the Rosary is, I believe, something begun in this church in the 1880s.”

Secondly, the Rosary chapels are the only ones in the world which depict the Rosary mysteries in sculpture, he added. ”Anyone who’s interacted in prayer with the great sculptural Stations of the Cross in Lourdes, for example, will know that one engages figural sculpture differently from flat mosaics or paintings. My own experience of this is that praying the Rosary in these chapels brings the mysteries of salvation alive in a different way, but this has to be seen in the flesh rather than merely online.”

”Each one of the Shrine’s side chapels contains an intricately-sculpted altarpiece depicting a different mystery of the Rosary, Giuliano told Aleteia. ”Pilgrims to the Shrine prayerfully process to each chapel, allowing the artwork to enrich their meditations.”
Now, through the virtual tour, viewers can “walk through a 3D space and explore every nook and cranny of these chapels and their hidden artistic gems,“ she said.
Virtual Faith?
But can praying the Rosary with this visual help really take the place of actually being in the church? Under the current circumstances, it’s the next best thing, but, Fr. Lew conceded, ”as bodily creatures, nothing virtual and online will truly satisfy us.”

”One good that God is bringing out of this pandemic and its social effects is that we long for social interaction and communion, and we long for the Sacraments,” he said. ”However, the VR model that Amy has produced is quite astonishing. It can seem as though one is visiting the church, and it is quite an immersive experience, especially as we add audio and interactive elements to the VR tour.

More recently, Giuliano added more videos, photos, and text into the virtual tour. For each of the mysteries of the Rosary depicted in the Shrine’s chapels, virtual tour visitors can now enjoy explanations of the artwork, pertinent scriptural passages, prayers, and quotes from St. Thomas Aquinas as they explore. They can listen to the Shrine’s historic organ and watch videos of homilies, processions, and liturgies from the Shrine. Videos on the life of St. Dominic and St. Thomas Aquinas are embedded, as are two EWTN documentaries filmed within the Shrine. The first documentary treats the site’s art and history, and the second is Scott Hahn’s lecture, “Scripture and the Mystery of Mary.”

”In this time of isolation, I have the added hope that it will bring some consolation to people who cannot otherwise visit a church,” Fr. Lew continued. ”I hope that those who pray the Rosary will make a virtual visit to London’s Rosary Shrine, and enjoy sitting in a particular Rosary chapel and, as they pray, I believe that the mystery depicted in stone and stained glass and sacred art in these chapels will help them contemplate the face of Christ with Mary.”