Drive-through Confession: How one priest is tending his flock during pandemic 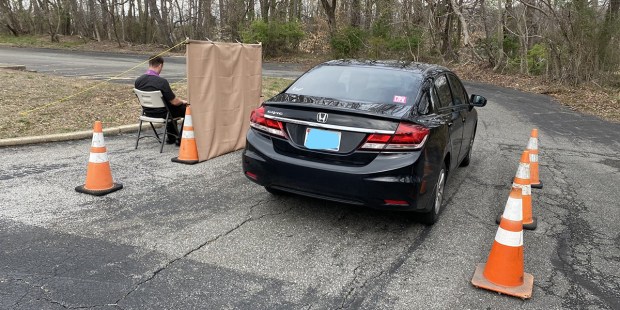 Lent is a time when many Catholics take a hard look at their lives and their relationship with God and neighbor, and that often leads to a visit to church to go to Confession. But the COVID-19 pandemic has made sacramental Confession difficult, even for the healthy. A suspension of public Masses and the need for greater social distancing has led many dioceses to advise priests of the need to have larger spaces for the sacrament, where priest and penitent can keep a safe distance, and to sanitize the kneeler after each person leaves.
But Fr. Matthew Fish, administrator of Holy Family Parish in Hillcrest Heights, Maryland, had the resources to turn his church parking lot into an open-air confessional, where penitents could remain in their cars and speak to him at a safe distance and behind a screen. His set-up was recently featured in a Time magazine photo spread.
Fr. Fish spoke to Aleteia about it on Monday of Holy Week.
Please tell me about how you came to set up a confessional station in your church parking lot.
I had the idea not long after the suspension of the public celebration of Mass.
Were you no longer able to have Confession inside the church? Was that because of a diocesan order?
Confessions are still allowed by our Archdiocese [of Washington, D.C.], but would have required a protocol of cleaning and coordination of distancing within the church that I wouldn’t be able to meet, as I have a small staff at the parish. So I was thinking, how could I improvise and still offer this.
Was it your idea to do this, or was it parishioners who were asking for it?
I’ve been preaching a lot about the Sacrament of Reconciliation these past two years, and trying to offer more opportunities for my parishioners to go to Confession; so I geared up to find a way, no matter what. When I saw what my priest-brother, Fr Scott Holmer, in Bowie, Maryland, was doing, I knew that was the perfect idea: outside confessions. We have a large parking lot, so my own application was rather easy to do. I jerry-rigged some broom sticks, a hanger rod, some rope and tent stakes, a few cones and lifting plates, and an old curtain, and I had my confessional.

How did you inform your parish of this move, and what is the schedule for confessions?

I was already offering Confession on Fridays before noon, and Saturday afternoons, so I kept the same times. I let my parish know through Flocknote, and so it was not hard to make the change.

How has the response been so far? Have you been getting more people than normal?
The response has been okay. I’ve had more people from outside of my parish, as I’m still working on getting more of my parishioners to come back to Confession.
Furthermore, my parishioners are mostly older, so I think they’re pretty cautious about leaving their homes. Getting some free publicity from the Washingtonian and Time magazine has probably helped, as has my posting on Twitter and Facebook — though again, these venues haven’t traditionally been great ways to communicate with my parishioners.
Whether or not I get many penitents, it’s something I want to do because of my own commitment to my priesthood. If I made choices based on numbers or the initial interest of parishioners, I probably wouldn’t end up doing very much at all. I believe priests today can’t wait for popular interest. The concern and passion of a priest for his ministry, what he shows in his preaching and by the love he shows for the sacraments, is what ignites the interest of his parishioners. If he takes his ministry seriously, people will respond. And even if the response isn’t as great as he would have hoped, at the end of the day, it’s firstly about his own faithfulness to God. I wouldn’t want to look back years from now and think, I didn’t do very much for Him.

Without breaking the Seal of Confession, could you say anything in general about the confessions you are hearing in this time of fear, worry, concern?
They’ve been fairly typical. I haven’t seen a great change in what people are confessing, though I think I have seen a gratitude in people who are quite thankful to be able to go during this time.

You haven’t been a priest very long, but have there been other times when you’ve had to “improvise” to provide the sacraments?
Probably not so conspicuously, but I think priests today constantly have to think outside the box. We’re living in a time in need of renewal, which means we can’t simply do what’s always been done. It’s often an effort of recovery or re-appropriation, presenting an older tradition or devotion in a fresh way, so people can experience that encounter with God in the sacraments as if for the first time. Much of that involves preparation, taking time to prepare people for an old idea that they may find rather new. And whatever is necessary to bring that imperative quality to the proclamation of the Gospel is what’s needed to be done, and so to make the sacramental life seem less like an option, a preference, and more like something without which the encounter with the living God is impossible.
Finally, it takes a determined effort to avoid the hackneyed or familiar: to restore a sense of the mystical, the otherness that evokes the transcendent. Otherwise the practice of the faith becomes platitudinous, which is deadly. So, most of the improvisation I do is less programmatic and more evocative. The point isn’t to find something better and more interesting than the traditional practices of the faith; it’s to offer those traditions in a way that lets people see them for all their beauty and mystical power, as if for the first time.
So with Confession, it starts with preaching, then it continues with personal encouragement, maybe some creativity about ways and times to offer it. But in the end, if people’s lives are being transformed by this sacrament, they won’t be able to keep it to themselves. They’ll tell others, and before long, they too will have to confront the imperative claim of this sacrament: either they will have to come, or they will resolutely dismiss it. I can’t make that choice for someone. All I can do is proclaim the Gospel, and make its imperative character as clear to them as possible, removing all obstacles that might discourage their practice. Drive-through Confessions is just another instance of that.