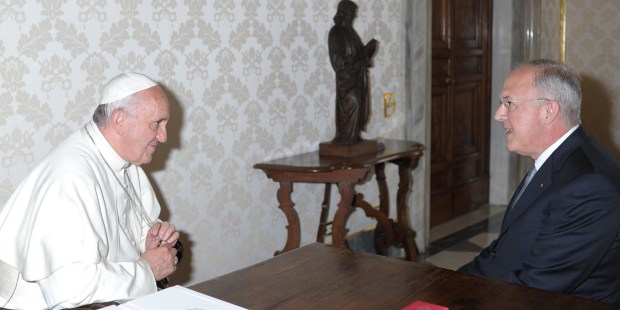 In February, the Knights of Columbus celebrated 100 years of work in Rome. Leaders of the Catholic fraternal organization might not have had any idea at that time of the needs that would arise in the coming weeks, as the COVID-19 pandemic affected the city and much of the rest of the country, and changed life for millions of people around the world.

As Catholics prepared to celebrate Holy Week and Easter, Supreme Knight Carl Anderson announced two major funding initiatives, one for the people of Rome and the other to help Pope Francis bring his message from Rome to the rest of the world.

The Knights will underwrite costs related to the broadcasts of the Good Friday Stations of the Cross on April 10 led by Pope Francis, and for the pope’s Easter Sunday Mass and Urbi et Orbi (to the city and the world) blessing on April 12. The funding — about $54,000 — covers costs related to the satellite transmission of the events.

In addition, the K of C is donating $100,000 to the Vatican’s Bambino Gesù pediatric hospital in Rome, for the care of children infected by the coronavirus. The hospital will use the funds to transform a space in its neonatology department into a high-intensity treatment room for infants and newborns with COVID-19.

The unit will be named for the Knights’ founder, the Venerable Servant of God Father Michael J. McGivney. It will feature ventilators and other specialized equipment essential for the care of the respiratory symptoms associated with the disease.

“These projects are particularly timely given the global pandemic,” said Supreme Knight Anderson. “For 100 years, the Knights of Columbus have worked in Rome for the spiritual and physical benefit of the city’s children and young people at the request of the Holy Father. Our support of Bambino Gesù hospital continues that tradition of service. At the same time, with so many in Italy and around the world currently homebound, our support of Vatican broadcasts will allow our Holy Father to join in prayer with Catholics from every corner of the globe during this critical time.”

The Knights of Columbus has a long history of supporting the Vatican’s telecommunications efforts. The organization provided funding for a shortwave transmitter for Vatican Radio in 1965 and has funded Vatican satellite broadcasts since 1977. It has also sponsored mobile production units for Vatican television.

The Knights established a permanent presence in Rome a century ago in 1920 at the invitation of Pope Benedict XV to assist the young people of the city. In February, Pope Francis met with the Knights of Columbus leadership and praised the organization for its charity and “unswerving devotion to the successor of Peter.”