Pope urges priests: Allow the Lord to wash your feet, to serve you 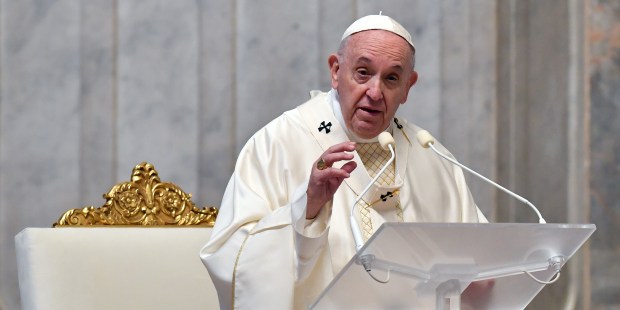 Francis at Holy Thursday Mass reflects on the mystery of the Servant of God who comes to serve us, and who we must allow to serve.

Pope Francis shared these heartfelt words with priests around the world, who “offer your lives for the Lord” “priests who are servants.” He said this during a homily he delivered off the cuff in the Holy Thursday Mass of the Lord’s Supper, celebrated with only a handful of people within St. Peter’s Basilica.

Usually on Holy Thursday priests renew their priestly vows at the morning chrism Mass, so Pope Francis said he wanted to remember the world’s priests.

“In these days, in Italy, as many as 60 priests died attending the sick, in hospitals, together with doctors and nurses: They are saints from ‘next door.’ Priests who served by giving their lives,” he said.

The crucifix that has become an icon of these days — known for the miraculous end of the plague in the 16th century — was behind the altar.

The pope’s homily focused on the interchange between Peter and Jesus:

“Unless I wash you, you will have no inheritance with me.” …

If I, therefore, the master and teacher, have washed your feet,
you ought to wash one another’s feet.
I have given you a model to follow,
so that as I have done for you, you should also do.”

In the homily, he reflected on three elements: Eucharist, service, anointing, saying “this is the reality that today we live in this celebration.”

The Lord who wants to stay with us in the Eucharist, and we become for ever Tabernacles of the Lord, we carry the Lor with us, to the point that He tells us that if we do not eat his flesh and drink his blood we will not enter into the Kingdom of God. This mystery of the bread and vine of the Lord with us, through us, within us.

This God who serves urges us to allow Him to serve us, the Holy Father reflected.

The pope asked priests to “allow yourselves to be washed and served by the Lord,” and then, he told them, you will be capable of forgiving. The Bishop of Rome expressed his closeness to all priests – from those just ordained, to the bishops … “up to the pope, all of us. We are all anointed by the Lord.”

Pope Francis reflected on the mission of priests, mentioning a letter from a Franciscan he had received today, who spoke of his chaplaincy in a prison. He spoke of priests who had been missionaries and were buried far from their native lands. He mentioned the account of a bishop who explained that some of these young priests had lost their lives due to the sicknesses present in the missionary territories. “They didn’t have the antibodies,” the bishop explained. The pope spoke of them as anonymous saints, who no one recognizes.

He urged: Do not be afraid to give forgiveness. Look at Christ. There is the pardon of everyone.