Verified thorns from the supreme relic of the Crucifixion can be found in church collections and even the British Museum.

A year ago, there was much concern about Christ’s Crown of Thorns. When fire almost destroyed Notre-Dame de Paris, this was the first item that a fearless priest rushed through the flames to save. Surprisingly, this supreme relic of the Crucifixion has been through worse. It escaped the Nazis’ passion for Passion memorabilia during their occupation of Paris, but came close to destruction during the French Revolution of 1789. 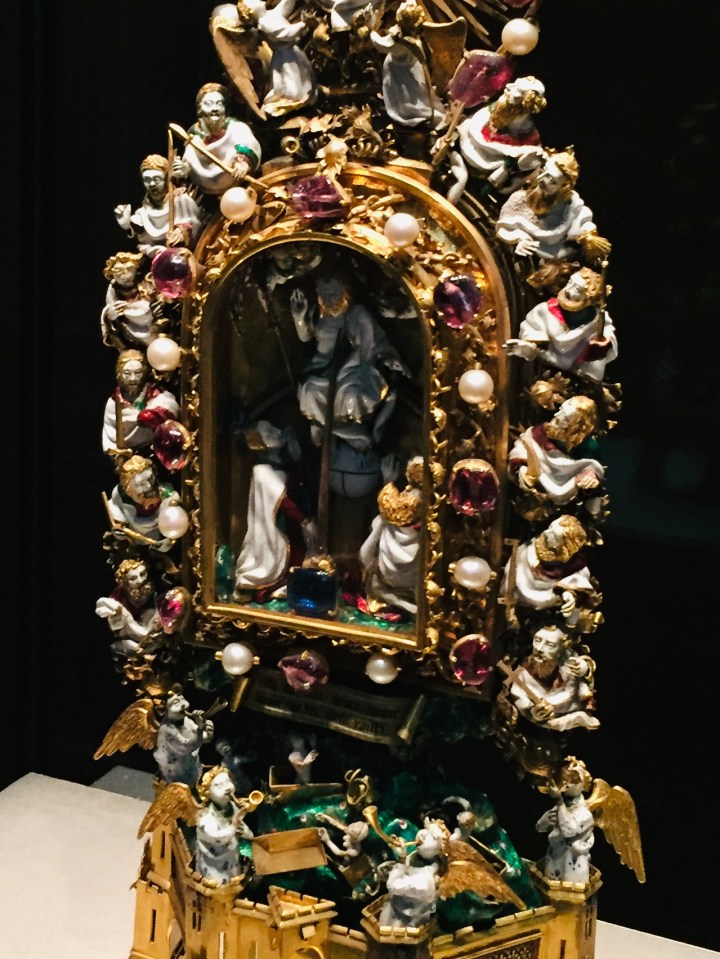 This was a terrible time to be a Christian relic or a priest. Any sacred artifact made of a precious material was likely to be stripped down or melted. Fortunately, there is little commercial value in reeds and thorns. Unlike so much else during the revolution, the crown was saved when its home was ransacked.

The repository for this exquisite item wasn’t Notre-Dame until after the French Revolution. From soon after its arrival in France, the Crown of Thorns had been kept in a church whose existence was a red rag to the already incensed revolutionaries of Paris. La Sainte-Chapelle (Holy Chapel) was built mainly for the king’s use, within his royal palace. It was also a storehouse for the king’s collection of sacred relics. The most important of these was acquired by King Louis IX in 1239. The only French ruler to become a saint, he had expensive taste in sacred souvenirs.

La Sainte-Chapelle was intended to be an enormous reliquary in itself, a showcase for the Crown of Thorns. The cost of the relic was a staggering 13,134 gold coins. To prevent it looking like a worldly purchase, the king arranged to pay off the previous owner’s debts instead. The cost of the chapel, which was a no-expense-spared undertaking, was less than a third of that sum. Looked at in modern terms, this was the most expensive collectible the world has ever seen. The price dwarfs that of Leonardo’s “Salvator Mundi.”

Instead of squirreling it away, the new royal owner proclaimed his acquisition far and wide. The Emperor of Byzantium gained plenty of money while Louis gained prestige that no ruler in Western Europe had ever had.

The best thing about the Crown of Thorns was that it could be sub-divided. This is not easy with a painting or sculpture, but the thorns could be removed and presented as the most desirable gifts in Christendom. This is what various French kings did. Oddly, the revolutionaries respected its integrity more than the kings who were so keen to make an impression. For this reason, no parts of it have gone missing since 1790. Before that, loose thorns were spread far and wide. This was more controlled than the with parts of True Cross, and we have a fairly good idea of which thorns are genuinely part of the original ensemble.

Almost all the verified thorns have been in church collections for centuries. John Calvin was predictably outraged when he started adding them up. Some of the locations are predictable, such as cathedrals in Cologne, Prague and Seville. Others are less so: a boarding school in the north of England (Stonyhurst College) and the British Museum, via the collection of the famous Rothschild banking family. Pittsburgh, Pennsylvania, also has a credible thorn in St. Michaels’s Church.

The Rothschild reliquary, which is perhaps the most elaborate of all, was created for the highly flamboyant brother of a French king around 1400. It seems strange for it to be displayed just like any other artifact in the British Museum when in its day this was the most revered object in private hands. Countless visitors wander unknowingly past the reliquary today, while in centuries past the faithful would have approached it on their knees.

In most cases it is only possible to see the reliquary rather than the thorns. There are some receptacles that look like a monstrance, allowing the faithful to gaze upon this humiliation that was devised for the “King of the Jews.” The thorns are long, sharp and hard – as would be expected of a Roman torture. The gospels lack detail about the exact nature of Christ’s crown, but in the locality of Jerusalem there are some frightening-looking descendants of the thorn bushes from two millennia ago. The gospels are also unclear about whether Jesus wore this for the Ecco Homo episode with Pontius Pilate or for the whole of his journey unto death.

The Crown of Thorns is such a powerful symbol, it is astonishing how long artists took to incorporate it into Crucifixion scenes. We must thank King Louis for his acquisition. Before then, the only crowns in Crucifixions were truly regal looking. From the mid-13th century the thorny version began to be used, in keeping with the move away from Christ as a triumphant king to being more of a suffering everyman. For 800 years this has been the view preferred by Catholics to risen Saviors or empty crosses.

The fascination continues to this day with “authentic crown of thorns” being offered on Amazon by a company in New Jersey. One I saw recently was listed as “boxed and used,” without any suggestion of who the original user was. It is at least made from thorns grown in the Holy Land, so perhaps it is more authentic than some.