Turn with these saints to the crucifix, to learn with them 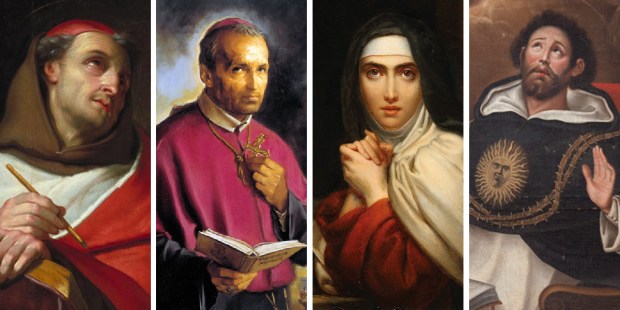 Teresa of Avila, Bonaventure, and so many more learned their sublimest lessons by gazing at the crucifix.

If one asks him, “What are these wounds on your back?” he will say, “The wounds I received in the house of my friends.” – Zechariah 13:6

There is a reality about Good Friday that can shake a person to their core: “Jesus was killed by those He came to save.”

That includes you … me … all of us. We put him on the cross. The horrible, ugly, dangerous, disturbing and yet beautiful cross.

St. Teresa of Avila once wrote a prayer to the Lord that included this thought:

You admit to Your friendship only souls that love the Cross.

The world universally recognizes the cross as a symbol of Christianity and has done so for more than 16 centuries. Something so ubiquitous can lose its ability to move people, become less profound or enticing. We pass it at the top of church steeples and see various artistic renderings of a cross often enough that we can stop noticing. Even for those of us who are Catholic, making the Sign of the Cross can feel automatic, casual and lose some of its impact.

That’s both unfortunate and sad. The cross — especially the crucifix, with a corpus of Christ — recalls the Crucifixion of Jesus and the redeeming benefits of his Passion and death.

He who desires to go on advancing from virtue to virtue, from grace to grace, should meditate continually on the Passion of Jesus.

St. Thomas Aquinas considered the events and implication of Holy Week, in particular Good Friday, so vital to faith that he addressed it at great length in Question 46 of Part 3 of his Summa Theologica to Christ’s Passion.

“The cross exemplifies every virtue,” Aquinas once said. “If you seek the example of love: ‘Greater love than this no man has, than to lay down his life for his friends.’ Such a man was Christ on the cross.”

St. Alphonsus Liguori included a particular tale about those two saints in his writings. Granted, it might be apocryphal, considering Bonaventure and Aquinas were classmates in the 13th century and Alphonsus wasn’t born until more than 400 years after they died. But it drives home a point reflected in the theology of both those Doctors of the Church.

At the time when St. Bonaventure was in great repute, teaching theology in Paris, and attracting a general esteem and admiration by his works, St. Thomas Aquinas went one day to see him, and requested him to show him what books he used for his studies.

Then St. Bonaventure, conducting him to his little chamber, showed him some very common books that were on his table. But St. Thomas gave him to understand that he desired to see the other books from which he derived so many marvelous things.

The Saint then showed him a small oratory, with nothing in it but a crucifix: “There, Father,” said he, “is all my other books; this is the principal one from which I draw all I teach, and all I write.

“Yes, it is by throwing myself at the foot of that crucifix, and begging of Him whose image it bears, the enlightenment of my doubts, and assisting at Mass, that I have made more progress in the sciences, and have gained more true fights than I should have done by the reading of any books whatsoever.”

You did not expect this, that whilst men study much and know but little, the Saints content themselves with this Crucifix, and attain to this most sublime genius. ~ Quote found in this book.

Read more:
How to read the Old and New Testaments together, according to St. Bonaventure

This Good Friday, let us do what Pope Francis encouraged on Palm Sunday:

So, in these holy days, in our homes, let us stand before the Crucified One, the fullest measure of God’s love for us, and before the God who serves us to the point of giving his life …

May we follow the example of the saints and find in the crucifix the sublimest lessons of all.

Read more:
Gazing at the crucifix, our sins are there: Pope says it’s not easy to understand