How to depict the Resurrection in art: Noli me tangere

The moment when the resurrected Jesus told Mary Magdalene "don't hold on to me" has inspired artists over the centuries.

Jesus said to her, “Stop holding on to me, for I have not yet ascended to the Father. But go to my brothers and tell them, ‘I am going to my Father and your Father, to my God and your God.’” Mary of Magdala went and announced to the disciples, “I have seen the Lord,” and what he told her.—John 20: 17-18

One of the great challenges of art is to depict an event as wonderful as Christ’s resurrection. Our Lord needs to look like the physical embodiment of somebody whom nobody has seen for 2,000 years. For most artists the answer has been to use plenty of radiant gold and a flag. Banners must have carried more symbolic weight in the past than they do now. Sadly, the fluttering St. George’s Cross emblem that Christ carries in most paintings from the distant past is also the national flag of England. 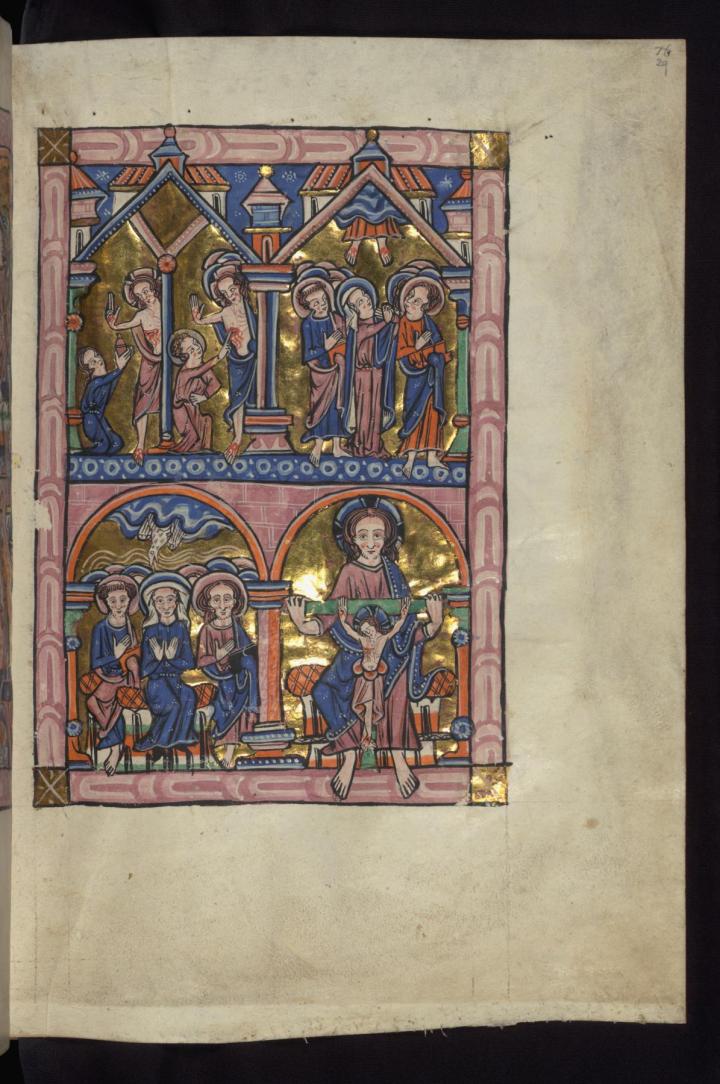 Noli me tangere (Don’t hang on to me)

A more human visualization of the resurrection has been inspired by the expression “Noli me tangere.” These Latin words convey more than a brusque “don’t touch me”; they are more like “don’t hang on to me (in my physical form).” The scope for artists to depict this fleeting encounter has proved enormous.

Mary Magdalene was the first person to see the resurrected Christ, giving her great importance. She was one of His most loyal followers as well, although it is her questionable association with sin that she is mostly remembered for. Not that artists needed to think about that. For them it was a question of showing the Magdalene’s surprise and perhaps disappointment. Reunited with the man she had such faith in, He is about to depart again. It’s a poignant episode that has been captured in different ways. Often tender and sometimes a little harsh, it is a constant reminder of physical loss and spiritual gain.

This is Mary Magdalene’s most significant moment in the New Testament story. As a woman, and possibly a fallen one, there were so many opportunities for artists to exploit. In almost every Noli Me Tangere case, they have respected her virtue and kept her clothes fully in place. Their representations of her in other situations incline more to Eve after the Fall. There is none of this with Noli Me Tangere. Instead, she becomes the first apostle.

It is the Savior, not the sinner, whose attire presented difficulties for visual transmitters of the Noli Me Tangere message. As Christ was entombed in a death shroud, it was likely that this would be his only garment when he left the tomb. The Magdalene mistook him for a gardener, which gave artists licence to do the same. There are some paintings, especially in books of hours, that show Our Lord wearing the complete gardening get-up, usually in material that looks like sackcloth. Even in the most famous Noli Me Tangere of all, x-ray analysis shows that Titian originally depicted Christ with a large, floppy gardener’s hat. Many other artists kept the hat and dispensed with the rest of the gardening garb.

Some artists removed most of their principal subject’s clothing altogether. This is a realistic approach for a figure who would not have had a change of clothes handy. What is less convincing is the milky softness of His skin. Perhaps this was an artistic metaphor for showing a former carpenter and wanderer whose physical presence is now halfway between His former self and the divine.

One tangible relic of His humanity is the hoe or spade that almost every painting depicts. Christ is a tiller of the garden in which faith will grow. Being an implement with a blade, it might also remind viewers of the Savior’s origins in a carpentry workshop.

Making associations between God and gardening starts near the beginning of the Bible. Genesis states that the Almighty “planted a garden in Eden.” The Gospel of St. John declares that Jesus was not only found by the Magdalene in a garden, but that he was buried in a garden, too. Easter is also very much about rebirth and green shoots.

As Mary Magdalene is the patron saint of contemplative pursuits, perhaps we too should spend more time tending to our gardens or window boxes in this time of enforced isolation. Keeping things contemporary, it must also be mentioned that Noli Me Tangere provides an almost premonitory image of social distancing.