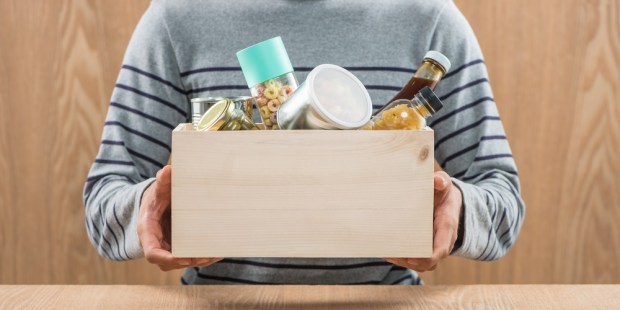 Some food banks are experiencing eight times the normal demand.

America is slipping into hard economic times as millions of Americans are filing for unemployment amid the coronavirus shutdown. With so many in need, charitable organizations are experiencing a drastic growth in demand for their food services and Catholic Charities is rising to the challenge.

Mark Zimmermann, of Catholic News Service, reports that Catholic Charities, an agency which provides food and services to those in need all year round is amping up their good works across the nation, handing out tons of food to thousands of families in need, as well as finding interesting ways to raise money.

In Washington, D.C., for instance, the demand on the Spanish Catholic Center’s food pantry is feeding eight times as many as they were prior to the coronavirus outbreak. This increased demand, however, has occurred in a very short period of time, less than a month. In order to tackle this fast exponential growth, they’ve begun holding virtual food drives, which encourages Catholics to financially support their important mission.

For perspective, Catholic Charities provided more than 2.5 million meals in 2019. If the trends continue to grow across the country at the rate they’ve seen in D.C., feeding the hungry in 2020 could require as many as 20 million meals. To accomplish this, Catholic Charities would need hitherto unimaginable funding, which they hope to provide in large part through these virtual drives.

“[Without Virtual fundraising] we wouldn’t have funding to support all this extra purchasing we needed to do and all the food distributions.”

CNS notes that Washington D.C. is not unique in its explosive rise in demand. Individual parishes in the surrounding region and across the states are struggling to meet the needs of many times more families than they are used to supporting. Arlington’s St. Anthony of Padua church has seen more than three times the traffic come through their food bank. They saw a record 533 families come on Holy Wednesday, receiving 30-40 pounds of food each.

The guidelines set to limit the spread of the coronavirus have led to some hurdles for volunteer workers. Now as they load up cars with food, they must wear masks and gloves, as well as maintain a 6-foot distance  from their fellow workers.

In New York, Catholic Charities Brooklyn and Queens have seen a 50% increase in demand for hot meals. They have upped their production from 5,000 meals per week to 8,000, since the coronavirus outbreak began.