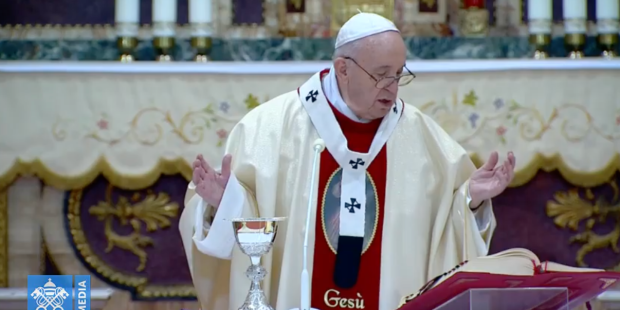 Francis calls us to be on guard against an even worse virus: selfish indifference.

Pope Francis celebrated Mass on Divine Mercy Sunday at the Church of the Holy Spirit near the Vatican, the church which John Paul II made into a shrine of the spirituality of Divine Mercy. It has relics of both St. Faustina Kowalska and St. John Paul II.

It was 20 years ago this year that John Paul II instituted the feast of Mercy during the Great Jubilee; it is held each year on the Octave Day of Easter, and five years after instituting it, John Paul II died on the Vigil of the feast.

Pope Francis spoke in his homily about the Gospel of today, which recounts how Thomas — the Apostle who was behind in accepting the Resurrection — now takes the lead, proclaiming, “My lord and my God.”

The Holy Father noted how Jesus begins again on this Sunday morning: “Jesus came and stood in their midst and said to them, ‘Peace be with you.'”

God’s is a “faithful and patient mercy,” he said. “God never tires of reaching out.”

Francis compared the disciples and the rest of us to small toddlers learning how to walk, falling every couple of steps, falling again and again.

“The hand that always puts us back on our feet is mercy,” the Holy Father reflected.

And thanks to God’s patient mercy, “On this feast of mercy, the most beautiful message comes from Thomas, the one who arrived late.”

Pope Francis urged the faithful to extend this mercy to others, especially in these times we are living.

“Selfish indifference would be an even worse virus,” he warned, saying we must be on guard against an attitude of “Everything will be fine if it is fine for me.”

He reflected on how the pandemic has shown that we are “all frail, all equal, all precious.” And thus, we must learn to put inequalities aside, as the early Christian community did.

He cited the verse from Acts of the Apostles, which explains that the believers “had all things in common. They sold their possessions and goods and distributed them to all.”

“This,” said Pope Francis, “is not an ideology. It is Christianity.”

Here is a Vatican translation of the full text of the homily:

Last Sunday we celebrated the Lord’s resurrection; today we witness the resurrection of his disciple. It has already been a week, a week since the disciples had seen the Risen Lord, but in spite of this, they remained fearful, cringing behind “closed doors” (Jn 20:26), unable even to convince Thomas, the only one absent, of the resurrection. What does Jesus do in the face of this timorous lack of belief? He returns and, standing in the same place, “in the midst” of the disciples, he repeats his greeting: “Peace be with you!” (Jn 20:19, 26). He starts all over. The resurrection of his disciple begins here, from this faithful and patient mercy, from the discovery that God never tires of reaching out to lift us up when we fall. He wants us to see him, not as a taskmaster with whom we have to settle accounts, but as our Father who always raises us up. In life we go forward tentatively, uncertainly, like a toddler who takes a few steps and falls; a few steps more and falls again, yet each time his father puts him back on his feet. The hand that always puts us back on our feet is mercy: God knows that without mercy we will remain on the ground, that in order to keep walking, we need to be put back on our feet.

You may object: “But I keep falling!”. The Lord knows this and he is always ready to raise you up. He does not want us to keep thinking about our failings; rather, he wants us to look to him. For when we fall, he sees children needing to be put back on their feet; in our failings he sees children in need of his merciful love. Today, in this church that has become a shrine of mercy in Rome, and on this Sunday that Saint John Paul II dedicated to Divine Mercy twenty years ago, we confidently welcome this message. Jesus said to Saint Faustina: “I am love and mercy itself; there is no human misery that could measure up to my mercy” (Diary, 14 September 1937). At one time, the Saint, with satisfaction, told Jesus that she had offered him all of her life and all that she had. But Jesus’ answer stunned her: “You have not offered me the thing is truly yours”. What had that holy nun kept for herself? Jesus said to her with kindness: “My daughter, give me your failings” (10 October 1937). We too can ask ourselves: “Have I given my failings to the Lord? Have I let him see me fall so that he can raise me up?” Or is there something I still keep inside me? A sin, a regret from the past, a wound that I have inside, a grudge against someone, an idea about a particular person… The Lord waits for us to offer him our failings so that he can help us experience his mercy.

Let us go back to the disciples. They had abandoned the Lord at his Passion and felt guilty. But meeting them, Jesus did not give a long sermon. To them, who were wounded within, he shows his own wounds. Thomas can now touch them and know of Jesus’ love and how much Jesus had suffered for him, even though he had abandoned him. In those wounds, he touches with his hands God’s tender closeness. Thomas arrived late, but once he received mercy, he overtook the other disciples: he believed not only in the resurrection, but in the boundless love of God. And he makes the most simple and beautiful profession of faith: “My Lord and my God!” (v. 28). Here is the resurrection of the disciple: it is accomplished when his frail and wounded humanity enters into that of Jesus. There, every doubt is resolved; there, God becomes my God; there, we begin to accept ourselves and to love life as it is.

Dear brothers and sisters, in the time of trial that we are presently undergoing, we too, like Thomas, with our fears and our doubts, have experienced our frailty. We need the Lord, who sees beyond that frailty an irrepressible beauty. With him we rediscover how precious we are even in our vulnerability. We discover that we are like beautiful crystals, fragile and at the same time precious. And if, like crystal, we are transparent before him, his light – the light of mercy – will shine in us and through us in the world. As the Letter of Peter said, this is a reason for being “filled with joy, though now for a little while you may have to suffer various trials” (1 Pt 1:6).

On this feast of Divine Mercy, the most beautiful message comes from Thomas, the disciple who arrived late; he was the only one missing. But the Lord waited for Thomas. Mercy does not abandon those who stay behind. Now, while we are looking forward to a slow and arduous recovery from the pandemic, there is a danger that we will forget those who are left behind. The risk is that we may then be struck by an even worse virus, that of selfish indifference. A virus spread by the thought that life is better if it is better for me, and that everything will be fine if it is fine for me. It begins there and ends up selecting one person over another, discarding the poor, and sacrificing those left behind on the altar of progress. The present pandemic, however, reminds us that there are no differences or borders between those who suffer. We are all frail, all equal, all precious. May we be profoundly shaken by what is happening all around us: the time has come to eliminate inequalities, to heal the injustice that is undermining the health of the entire human family! Let us learn from the early Christian community described in the Acts of the Apostles. It received mercy and lived with mercy: “All who believed were together and had all things in common; and they sold their possessions and goods and distributed them to all, as any had need” (Acts 2:44-45). This is not some ideology: it is Christianity.

In that community, after the resurrection of Jesus, only one was left behind and the others waited for him. Today the opposite seems to be the case: a small part of the human family has moved ahead, while the majority has remained behind. Each of us could say: “These are complex problems, it is not my job to take care of the needy, others have to be concerned with it!”. Saint Faustina, after meeting Jesus, wrote: “In a soul that is suffering we should see Jesus on the cross, not a parasite and a burden… [Lord] you give us the chance to practise deeds of mercy, and we practise making judgements” (Diary, 6 September 1937). Yet she herself complained one day to Jesus that, in being merciful, one is thought to be naive. She said, “Lord, they often abuse my goodness”. And Jesus replied: “Never mind, don’t let it bother you, just be merciful to everyone always” (24 December 1937). To everyone: let us not think only of our interests, our vested interests. Let us welcome this time of trial as an opportunity to prepare for our collective future, a future for all without discarding anyone. Because without an all-embracing vision, there will be no future for anyone.

Today the simple and disarming love of Jesus revives the heart of his disciple. Like the apostle Thomas, let us accept mercy, the salvation of the world. And let us show mercy to those who are most vulnerable; for only in this way will we build a new world.