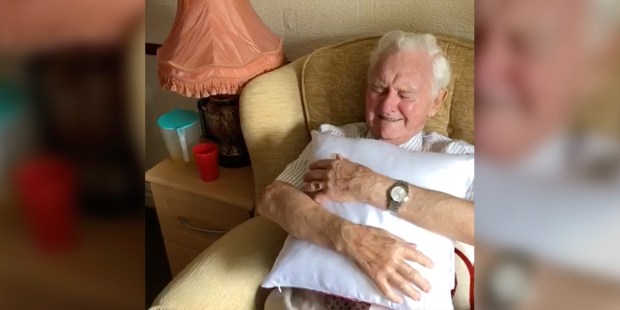 Be sure to grab a tissue for this video that’s gone viral.

Ken Bembow is an elderly nursing home resident who goes to sleep every night with a photo of his late wife, Aida, in his hands, ever since she died 9 months ago. However, Kia Tobin, his carer at Thistleton Lodge in Lancaster, England, was anxious that the 94-year-old might hurt himself on the glass of the picture frame, so she offered him a safer solution.

The 17-year-old Tobin had his wife’s face printed onto a cushion for the D-Day veteran to cuddle up to at night. And when she presented the thoughtful gift to him he broke down in tears — as did most people who watched the moving moment.

While the video is a testament to the love the Bembows shared during their 71 years of married life, it’s also an incredible example of a young woman going beyond her duties as a caregiver.

Furthermore, in an interview with Good Morning Britain, the teenage Tobin shared how she has moved in to the caring home during the coronavirus pandemic to make sure residents can continue to be cared for in safety. Tobin, who lives with her own grandparents, made the decision so she could ensure her elderly relatives remained safe, while caring for the vulnerable seniors at work. However, before moving into the nursing home, she made sure her grandparents had everything they need to get through the quarantine period as safely as possible.

The beautiful video and subsequent interview is worth watching to the end, to see the joy of marriage and to hear how Bembow “nearly smothers” his wife, who he thinks is watching over him, every night.

Read more:
Watch this viral video of a heart-warming elderly couple in quarantine