Moving image: Grandparents gaze at newborn through window during quarantine 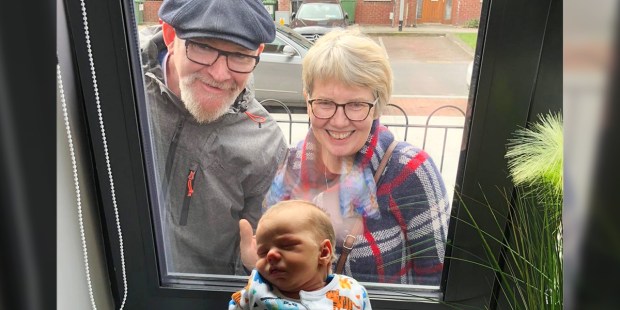 Parents are finding ways to introduce their new babies to the rest of the family.

With the coronavirus pandemic, parents who arrive at the maternity ward encounter redoubled measures to care for their babies. Due to the high risks of disease transmission, access is strictly limited; video calls and photographs are among the strategies being used to introduce new family members to their grandparents, uncles, cousins, and friends.

It was in this context that little Ollie came into the world. When he was born on March 9 of this year, residents of Dublin (Ireland) were living through their first days of isolation, a measure that completely hindered the baby’s family’s plans.

Throughout the entire pregnancy, it was the intention of Ollie’s parents, Hannah Levins and Denis Cummins, to have grandma Paula Norris on hand immediately after the birth to help them with their other two children—Penny, 3, and Lewie, 14.

However, with the increase in the number of COVID-19 cases in Ireland, both the baby and the grandmother needed strict preventive measures that completely ruled out any physical contact with either of them.

Paula told Skerries News, “Part of the reason why we didn’t feel like we could go near her was she’d had a cesarean. Because she was post-op we really felt we should keep away from her. She wasn’t out of hospital until the Thursday evening (the day of the announcement for all the schools to close).”

In an interview with reporter Laura Abernethy of the Metro.co.uk website, Hannah stated that since she’d given birth by cesarean section, she and her baby spent four days in the hospital. In that timeframe, the first patient with coronavirus was admitted to the hospital where she was.

“While I was in there, I could see things changing – there was less staff, they had stopped all student medics coming into the hospital as there was an outbreak in the college, so the midwives were working around the clock and doing a fantastic job,” Hannah told the website.

As she went on to explain, “There were no visitors allowed except for the dads but that changed too, and then there were lots of unhappy visitors outside the hospital that the security team had to handle.”

While changes were taking place inside the hospital, even more were happening outside. When she was discharged, it seemed like “a whole new world” compared to when she had been admitted to the maternity ward.

“The day we were going home was a little scary. ‘Inside the hospital, we were safe but walking outside, there was a sense of panic and upset. There were queues of people at the stores panic buying. I was glad when I got Ollie home,” Hannah told Metro.

But, according to Hannah, the big issue that prevented grandparents from meeting Ollie up close was that some of Grandma Paula’s coworkers tested positive for COVID-19. “That was hard. This is grandchild number eight for them, possibly the last one for quite some time,” she told Metro.

But even though she was unable to place her baby in her grandmother’s arms, Hannah and Denis decided to introduce Ollie to her grandparents Paula and Hubert through the window.

“This may look like a sad photo but it was actually a happy positive moment for us. It’s harder not seeing them at all, and we could crack open the other window for a little chat. It was nice,” explained Hannah.

Paula explained to Skerries news, “We both work in Trinity College and there were cases in Trinity. Because we are front of house we deal with a lot of international students and tourists, we were very nervous about ourselves, so we didn’t go near Hannah and the baby for about a week really. That’s when the photo was taken.”

For Hannah, going through recovery without Paula’s help makes the moment even more difficult, but the important thing is that everyone is okay. “My three-year-old Penny is a lively soul and extremely eager to cuddle her new brother. An extra pair of hands would be nice sometimes but we are making the best of it,” she added.

Read more:
3 Great things about being pregnant at a time of quarantine