A virtual visit to the Our Lady of the Snows site in Marsaxlokk, Malta

The second delivery in our Marian Devotion and Veneration in Malta series.

In our first article of the series, titled Malta, a Land of Marian Devotion and Veneration, we tried to present a concise and generic overture to millennial heritage and traditions of a Catholic Land that has been Christian since the Apostolic Age. It is no easy task because Christian roots and Marian devotion are of the same age as Christianity itself. Now it’s time to explore in some detail the Marian tradition and to present evidence of the devotion to the Blessed Virgin that the Maltese have shown for almost 2,000 years.

In our aforementioned brief preamble, we mentioned the Tas-Silġ prehistoric temples and the Byzantine Basilica, which was erected on their site, c. 4th or 5th century. This article will offer a more detailed account of this site.

The prehistoric temples and pagan spirituality at Tas-Silġ

Tas-Silġ (Maltese for ‘of Snows’) is one of the most ancient religious sites in Malta. Its origin dates back to the misty prehistoric period. Archaeologists concur that it was built when the Temple Era was nearing its end, approximately 2,800 BC. The area where the Tas-Silġ Sanctuary is located was known as Il-Kasar, but later became known as Tas-Silġ. It took the name of a smaller church dedicated to Our Lady of the Snows. This Church was built about 100 metres away from the temple. The devotion to Mary, Our Lady of the Snows is ancient. It originates from the name of the Basilica of Santa Maria Maggiore (St. Mary Major) in Rome. Pope Liberius (352-366) had an unusual dream, in which he saw the Esquiline Hill covered with snow in August, when the summer heat is at its peak. The amazing thing was that after this strange dream, this event really happened. A church dedicated to our Lady was built on the land covered by snow. This explains the origin of the Latin title Sancta Maria ad Nives — Our Lady of the Snows.

Today, only some traces of the pagan temple (and Byzantine basilica) at Tas-Silġ remain. It was  oval-shaped. The Bronze Age settlers used it as a dwelling while the visiting Phoenician mariner-merchants turned it into a temple in honor of their chief divinity, the goddess Astarte, queen of the stars and navigation. During the heyday of the Carthaginian Empire, their powerful warships used Marsaxlokk as a naval base while also being used as a commercial port. The Carthaginians were descendants of the Phoenicians, but they preferred the god Melkart and consequently the Tas-Silġ temple became Melkart’s temple. During the First Punic War, Carthage lost both command of the seas and also of the Island of Sicily. The Romans also occupied our Islands. The temple overlooking Marsaxlokk Harbour changed hands for the umpteenth time. Juno, queen of heaven took Melkart’s place. The Romans redecorated the temple, enlarged it and endowed it with many precious treasures and gifts. It was so famous that it was mentioned by Cicero in one of his recorded Senate speeches.

The Byzantine Orthodox Catholics and the basilica

In the 5th century, a Byzantine fleet invaded Malta. They established a naval station in Marsaxlokk. The Byzantines were Orthodox Christians and it was natural that they turned the ancient pagan temple into a Christian basilica. Furthermore, we have to notice the historical fact that once the Christian Church became the established religion of the Empire, it used to consecrate pagan temples in honor of its saints, martyrs and the Blessed Virgin.

After the first century A.D. there is an unexplained hiatus in the story of Tas-Silġ. The once hallowed precincts were apparently abandoned and became ruinous. This is contrary to what happened elsewhere on Melite and Gaulos where the old pagan cults were not only perpetuated but even further consolidated. The resumption of activity seems to coincide with the first testimonies for a Christian presence. The Italian Mission suggests the early fourth century, but the pottery evidence seems to point to the fifth. In fact the only items which can be securely dated are the standard North African red-ware lamps (Hayes Type IIA) which belong to a type that does not seem to have been produced before 400 A.D. Fragments of such lamps have been found in considerable quantities […] The most important Christian establishment was a three-aisled basilica with an eastern transept and apse, which occupied the whole length of the central court of the fanum, its side walls resting against the stilobate of the peristylium whose columns it reutilised in the division of its internal arrangement. The paucity of architectural remains makes a reconstruction hazardous, but a study of the internal space which takes into consideration the few surviving elements points to a nine bay building. The imprints of two columns on the N. side of the colonnade and those of another five on the S. side, can faintly be made out. A shallow cutting (42 x 42 x 15cm), immediately in front of the apse, was presumably intended to hold the central support of an altar that was cemented in place by a lime-based mortar and secured in position by a metal pin that fitted in a cross-like groove in the middle of the cutting…

Byzantine Christians and the God Bearer – the Theotokos

The Latins translated this title into Mater Dei, which means Mother of God. It is a historical fact proved by impeachable documentary and architectural evidence, that special and intensive devotion to the Blessed Virgin was one of the chief characteristics of the Christian Orthodox Church and society. In Western Christendom, devotion to Mary increased greatly after the Crusades. After the Crusades, churches and cathedrals in the West began to be dedicated to Our Lady. Hitherto, local heroes and warrior saints were more popular. During the First Crusade, Bishop Adhemar, the Papal Legate, wrote that it is almost impossible to visit a Byzantine church or monastery and do not find an Icon dedicated to the Theotokos.

Therefore, it is impossible too, that the Orthodox Byzantines did not bring with them the Marian devotion that had entered the souls of the inhabitants and has never left them ever since. As I have already indicated above, between the 4th and 5th centuries, that is during the early Christian era, the Orthodox Byzantines erected a basilica at the Tas-Silġ site. It follows that it is very difficult not to conclude that it was dedicated to the Blessed Virgin Mary. All the above indicates that it is very probable that the devotion to the Blessed Virgin in our Islands has a history of at least 15 centuries, since the time of the Byzantines built their Basilica at Tas-Silġ. Furthermore, we will not be stretching our imagination too far if we believe that the Evangelist Luke, who proved his devotion to the Blessed Virgin in his Gospel, preached to our forefathers about the Blessed Virgin Mary when he visited Malta with the Apostle Paul in 60 AD. 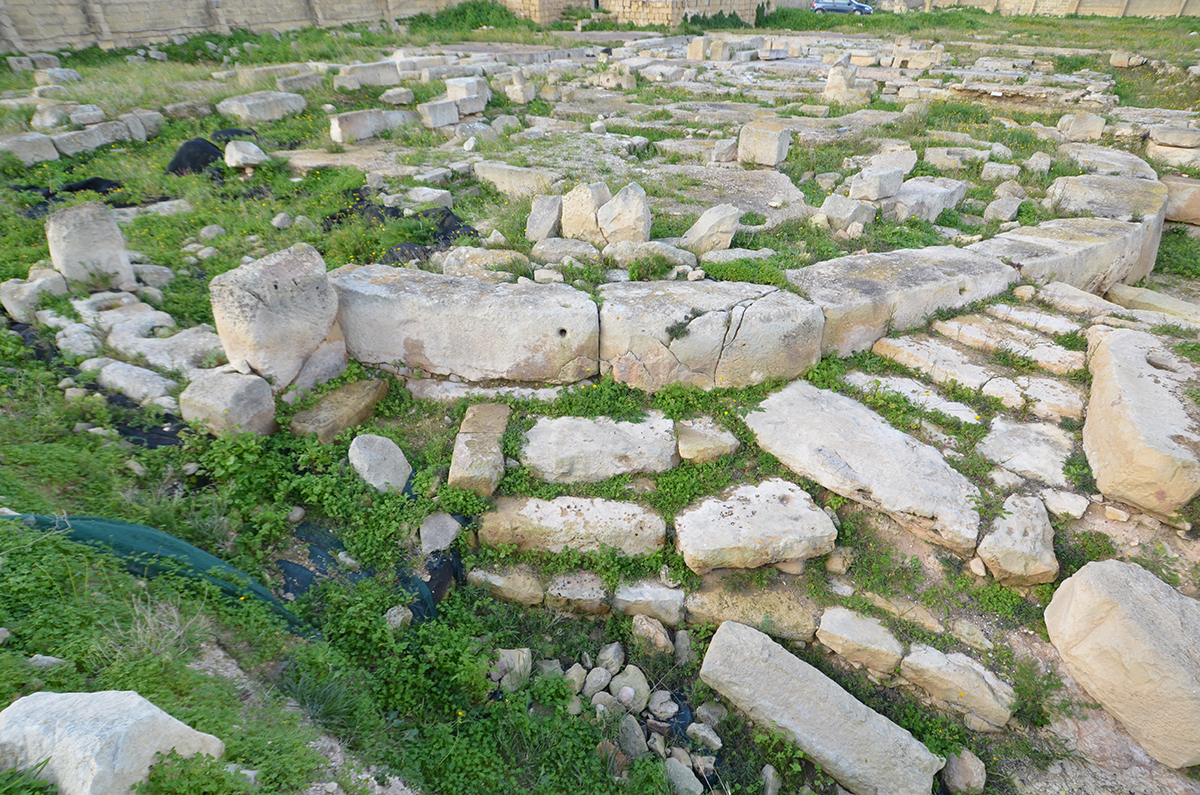