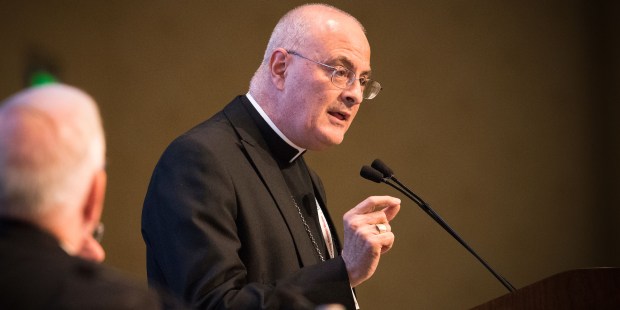 An Eastern Catholic bishop working at the epicenter of the COVID-19 pandemic in the United States ignored the pleas of passersby on the street and helped a man who who had fallen in a fit of coughing.

A week later, the bishop started showing symptoms of COVID-19.

“I have no regrets whatsoever, even while I was suffering,” said Bishop Gregory J. Mansour, head of the Maronite Eparchy of St. Maron, based in Brooklyn, New York, April 29. Rather, he said the whole experience has given him a “better sense of communion with my priests and with the people.”

“We’ve so many people going through this, suffering and some deaths,” Bishop Mansour told Currents, a news program on the Latin Catholic Diocese of Brooklyn’s NET TV.

Mansour, who recently finished a term as chairman of Catholic Relief Services, said he is pretty sure he caught COVID-19 from helping a man who had fallen on the street and was coughing uncontrollably. He said people were urging him to stay away from the man because of the danger of catching the coronavirus. The man was subsequently picked up by an ambulance.

The 64-year-old prelate, who has served as head of the Brooklyn Eparchy since 2004, said he would have helped the man even if he knew he had the coronavirus. “He was really in bad shape, and everyone was just standing around,” he said. “I was not even thinking of anything; it was just natural instinct.”

A week later, in late March, the bishop said he developed symptoms of COVID-19, which he had for eight or nine days. They included night fevers, sweats, body aches, diarrhea, headaches, and lethargy. “Coming out of it, I completely lost my sense of smell and diminished my sense of taste,” he said, “and I still have some of the fatigue.”

In late April he said had a test that showed that he had had COVID but he now has the antibodies, giving him “something of a defense, so I can go forward now.”

Bishop Mansour said his experience with the virus and his necessary quarantine also taught him that “when you’re by yourself, you really take the time to sincerely look at your relationship with God and your own behavior, your own thoughts and emotional life and to align it more closer to God’s will.”