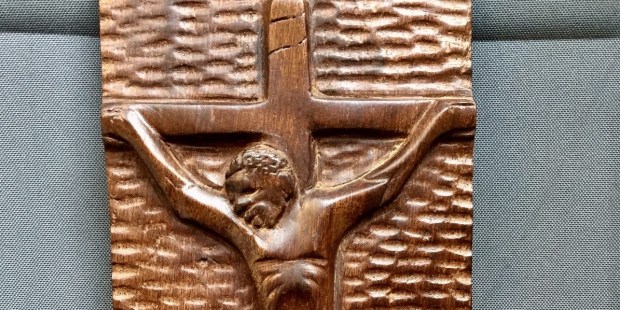 Photo by LdeG, courtesy of Museum of the Cross
Share
Print
Lucien de Guise - published on 05/03/20

Crucifix imagery is shared by Christianity and the African culture that embraced it.

May 3, 1491, was a historic day for Catholicism in Africa. The ruler of Kongo was baptized on this day, taking a name that can be Anglicized to King John I. His territory and religious beliefs are now shared by a number of modern countries in the heart of Africa. It was the Portuguese who first introduced their faith, which was received with enthusiasm. There were many points of similarity between Christianity and the pre-existing beliefs in his vast empire. Not least was the coincidence of crucifix imagery. This has been continued in a Christian context for more than 500 years. The two pictures here represent a 16th-century crucifix in brass and a 20th-century Station of the Cross in a very dense wood. Despite the unhappy colonial history of this region, the people have remained almost entirely Christian and mostly Catholic.
Lucien de Guise is on Instagram @crossxcultural. As a Catholic writer, editor, curator and former museum director, his aim is to build bridges through art.