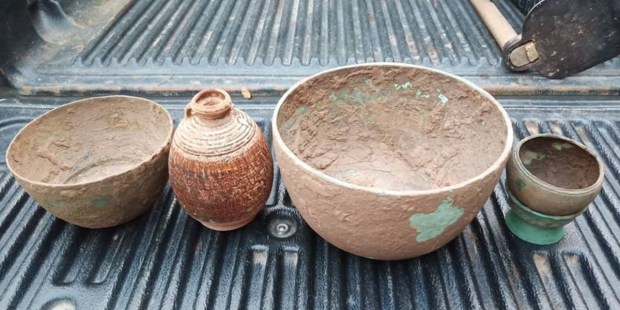 The smugglers, who include terrorist organizations, use Facebook to coordinate their efforts and crowdsource information.

While much of the world is bunkered down in isolation, there are some who are taking advantage of the lax security to raid archaeological sites and steal their valuable historic artifacts for black-market sale. A new report from Katie Paul, co-director of the Antiquities Trafficking and Heritage Anthropology Research (ATHAR) Project, highlights these nefarious acts, while the ATHAR twitter feed calls on Facebook to account for their reckless online practices, which facilitate such sales.

This thread provides a window into 1 of the 120+ groups ATHAR monitorshttps://t.co/d9wSRjc0mP

Screenshots of Facebook pages filled with real-time images and videos of illegal excavations abound on ATHAR’s social media threads, drawing attention to the opportunistic crimes. These videos now serve as valuable evidence in the fight against the looting of important cultural sites in the Middle East and parts of North Africa, where the practice is most prolific.

Last summer, Paul co-wrote a report on the practices of looters, as well as Facebook’s role as a platform to aid in such illegal sales. Now, in an article written for Medium, Paul notes that the looting has only become worse during the coronavirus world lockdown. She writes:

A common tactic for antiquities traffickers on Facebook seeking to prove that their future offers are authentic is to post active looting photos. Others post photos of illegal excavation in progress to crowdsource information from members of their Facebook trafficking Group about the viability of their chosen looting site. Over the past two months as the pandemic crisis has grown, ATHAR Project has observed an increase in both of these types of posts.

Paul goes on to explain that there are many factors that have led to this surge in looting, not least of which is the coronavirus world crisis, which has left many archaeological sites vulnerable. Other factors include a higher rate of unemployment, easier access to buyers through the internet, and even that the weather is favorable in the Middle East during this time of year.

On the ATHAR Project website, they are tracking 95 Facebook groups that are known to traffic stolen artifacts and they are monitoring nearly 2 million Facebook users who are affiliated with these groups. In a summary of their full report, Facebook’s Black Market in Antiquities, they write:

Facebook and other technology companies receive broad immunity from responsibility for any content posted to their platforms by third-parties under the 1996 Communications Decency Act Section 230.

Aside from the law, Facebook does have its own internal policies laid out in the company’s Community Standards that prohibit the sale of black-market items like drugs and wildlife. But illicit cultural property is not listed in the banned trades under Facebook’s Community Standards. As a result, today we can find detailed information about antiquities trafficking that has remained active on the platform for years. This data provides a rare look at the inside of the trade.