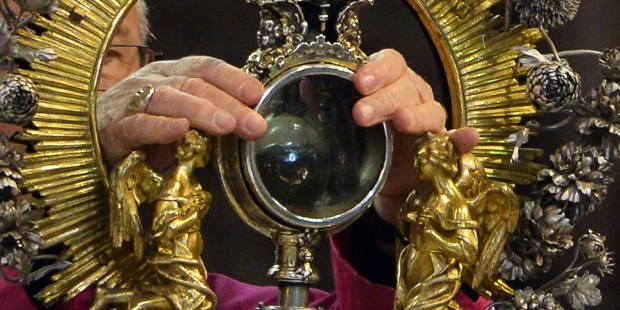 Blood of St. Januarius, a saint hailed for often intervening to save us from the plague, liquefies in its reliquary.

A reliquary with the blood of the early Church martyr St. Januarius is one of the treasures of Naples, Italy. The blood is said to miraculously liquefy at certain times of the year, including the Saturday before the first Sunday of May. Despite the lockdown of Italy, Cardinal Crescenzio Sepe reported that the miracle had happened May 2, and blessed the city with the reliquary via livestream.

“How many times our saint has intervened to save us from the plague, from cholera. St. Januarius is the true soul of Naples,” Cardinal Sepe said.

The dried blood of St. Gennaro (his name in Italian), which is preserved in two glass vials in the Naples cathedral, traditionally liquefies three times a year: on the saint’s September 19 feast, which commemorates his martyrdom in the Catholic liturgical calendar; December 16, the date of the eruption of Mt. Vesuvius in 1631, which was believed to have been halted through the saint’s intervention; and the Saturday before the first Sunday in May.

St. Gennaro was bishop of Naples and is a saint and martyr of the Roman Catholic and Eastern Orthodox Churches. Historical sources claim he was martyred in the year 305 during the Diocletian persecution.

The repeating miracle does not have official Church recognition.

In his homily, Cardinal Sepe warned about “another possible epidemic that worries me,” speaking of the mafia. “There are those who are good at making a fortune in times of epidemic,” he lamented.

See the blessing at the bottom of the link here.

Read more:
The remarkable story behind the real St. Januarius, the saint whose blood liquifies each year