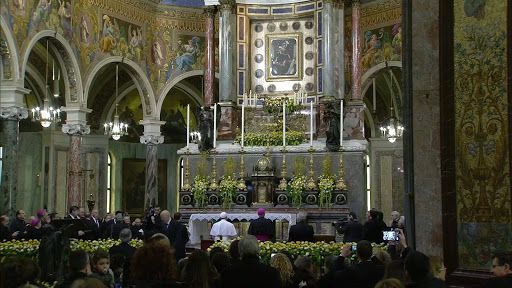 On May 8, the special “supplica” is said in Pompeii, and it’s also the feast of the pope’s own hometown devotion to Mary: Our Lady of Lujan

“The day after tomorrow, May 8, the feast of Our Lady of Lujan will be celebrated in Argentina,” Pope Francis said May 6 at the general audience, referring to the patron of his home country. “May she, Mother of God and our Mother, intercede for us and obtain for us from Her Son the necessary graces in this difficult time that the world is going through.”

He also noted that this week in the Shrine of Pompeii, there is be special prayer to Our Lady of the Rosary, as occurs each May 8 and on the first Sunday of October.

“I urge everyone to unite themselves spiritually to this popular act of faith and devotion, so that through the intercession of the Blessed Virgin, the Lord may grant mercy and peace to the Church and to the whole world.”

Earlier this week, the Holy Father sent a touching hand-written note to the bishop of Lujan, saying that his heart would travel there for the feast day, as a spiritual and “virtual” pilgrim.

I will gaze upon her once more and, once again, I will let her gaze at me with that motherly gaze that renews you, cares for you, gives you strength.

“We will leave with her our worries and our joys,” the pope said.

Then, citing a priest and poet of the archdiocese, Amelio Luis Calori, in his book Aula Fulgida, published in 1946, the pope said he would promise the Virgin to behave better:

This afternoon, my Lady, my promise is sincere.
But just in case, don’t forget to leave the key outside.

And I will come home with the promise of the gift of grace.

The Holy Father, the pope of mercy, has spoken of this quote before, for example on his trip to Bulgaria last year.

The shrine of Lujan is located some 70 kilometers (about 45 miles) northwest of the city of Buenos Aires, Argentina. Pope Francis was the archbishop of Buenos Aires from February 28, 1998, until his election to the papacy on March 13, 2013.

The devotion to Our Lady of the Rosary at Pompeii traces to Blessed Bartolo Longo, who converted from satanism and became, as John Paul II said at his beatification, “a man of Mary.”

Bartolo felt Our Lady tell him that his path to heaven was through teaching others to pray the Rosary.

Bartolo moved to Pompeii, where he began Rosary groups, organized Marian processions, and began work on a shrine to Our Lady of the Rosary. His work was funded by the Countess di Fusco, with whom he worked so closely that rumors began to spread about the nature of their relationship. Though Bartolo had taken a private vow of chastity, he was encouraged by Pope Leo XIII to marry the countess for the sake of the work; the two entered into a celibate marriage and continued to serve the poor.

For more than 50 years, Bartolo preached the Rosary, founded schools for the poor, established orphanages for the children of criminals, and transformed a city of death to a city dedicated to the living Mother of God.

A special prayer is said twice a year at Pompeii, telling her, “O Queen … We shall not leave You until You have blessed us.”

Benedict XVI visited the tomb of Bartolo Longo in his visit to the Pontifical Shrine of Pompeii, where he is buried. The pope stopped at the tomb of the saint, and spoke about him during his reflection on the rosary. See here.