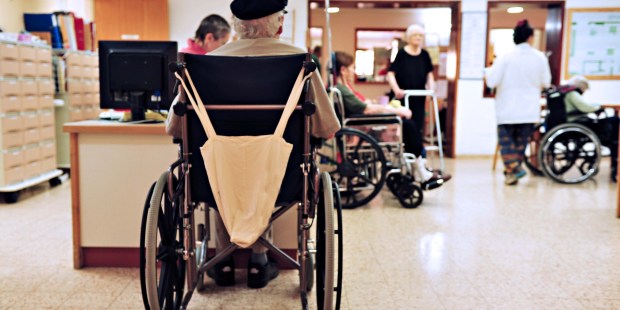 “With poetry, you can do a lot to jog the residents’ memories,” says Fr. Hugh Vincent Dyer.

A Catholic priest working as a chaplain in a home for the elderly has found ways to minister to a mixed population in addition to celebrating Mass, bringing Communion to the sick, and hearing confessions.

Fr. Hugh Vincent Dyer “has become more creative in connecting with his flock,” reports art critic William Newton at the Federalist. Every Tuesday and Thursday, the priest broadcasts a “Cultural Miscellany” through the nursing home’s closed-circuit television network,  looking at a variety of topics and linking them with poetry and the arts.

The priest, a member of the Dominican Order, ministers to one of the most vulnerable populations in what has been the epicenter of the COVID-19 pandemic in the United States: New York City. As the pandemic began to intensify, he made the decision to move from the friary at St. Catherine of Siena Church on Manhattan’s upper East side to the nearby nursing home. This way, he’d minimize the possibility of bringing something back to the home or, conversely, of spreading contagion to his brother friars, who also minister to vulnerable populations in nearby hospitals.

Although Newton and a New York Times reporter in a different article do not mention the name of the nursing home, it seems to be a Catholic institution. In addition to Dyer’s service, there are nuns working there too. Not all of the 360 or so residents are Catholic in the home, but non-Catholic residents need care too, of course, especially at a time when the pandemic has led to isolation and anxiety.

“He recently gave a talk on trees, for example, and their relationship to both culture and scripture, using ‘A Ballad of Trees and the Master’ by Sidney Lanier (1842-1881) as a jumping-off point,” Newton writes. “On another occasion, his reading of ‘The Builders’ by Sara Henderson Hay (1906-1987), a retelling of ‘The Three Little Pigs,’ led to a reflection on the material aspects of practicing the virtues.”

As anyone who has worked with the elderly knows, Dyer, 45, discovered that his flock had lots to give him. One resident told him about studying with poet W.H. Auden years ago at Columbia University. This was the incident that inspired the priest to bring poetry to residents.

“With poetry, you can do a lot to jog the residents’ memories,” he said. “I’m trying to connect things like poetry and culture and spirituality without making it stale for them. We’re all living with a new reality together, here in the nursing home. … Residents tell me that they like to hear descriptions of things, because it allows them to remember more from their own memories.”

Dyer also runs movie nights, and instead of residents being wheeled down to the recreation room, the CCTV carries films to individual rooms. Sometimes, the chaplain gives a little introduction to the film of the evening.

“For me, [providing cultural outlets to residents] was just an acknowledgement that our elderly have lived in this city for many years,” Fr. Dyer said. “And even though the museums and other cultural institutions are currently closed or no longer accessible to them, they can still have access to culture.”

The whole profile can be read at the Federalist website.