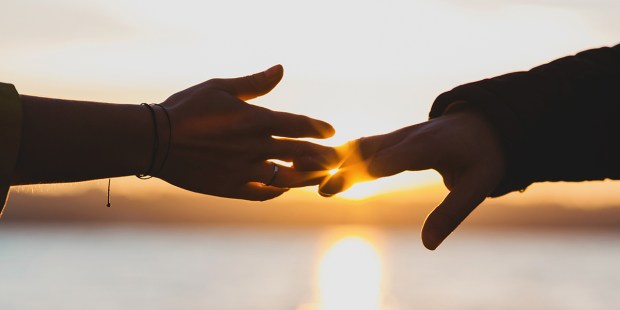 What will you say? And what if it’s your heart that longs for a mother’s love?

Mother’s Day is when I usually reflect on the endless lovely characteristics of my own mom. Probably because I have such a remarkable one, but also because I’ve had a few broken souls in my life lately who weren’t so fortunate — those who had moms who didn’t nurture them; moms entrenched in alcoholism or stricken with mental illness; moms who were abusive or permitted abuse; moms who were selfish or simply ambivalent.

And if we pay attention, Jesus is very much alive in the eyes of these mother-starved souls. His spark of divinity speaks in the voice of the child eyeing your snacks at the park – the child whose mom isn’t pushing him on the swing; and maybe it’s because she can’t push him on the swing, maybe she’s sitting nearby too, staring at you, also asking silently:

What will you say?

Before you answer, keep in mind I’m referring to Matthew 12:46. It’s the time Jesus is teaching his followers and someone interrupts him to let him know his mother and brothers are outside. Jesus replies by saying, “Who is my mother, and who are my brothers?” And stretching out his hand toward his disciples, he says, “Here are my mother and my brothers. For whoever does the will of my Father in heaven is my brother, and sister, and mother.”

In short – and this claim is readily accepted by centuries of theologians and scholars – Jesus is raising the Faith above one’s own bloodline. He’s saying that a Christian’s true family is with those “who do the will of [the] Father.”

It’s interesting this verse appears in the same gospel that opens with Jesus’ genealogy, a litany of verses easy to find tedious, but verses that truly strike home the point: Family is very important. And we know Jesus deeply revered his own sinless mother, securing her welfare by entrusting her to St. John, even as he suffered on the cross: “Woman, behold thy son” (John 19:26). But on this specific day, he placed priority on those who were hanging on his every word.

Mother Angelica, the beloved nun and founder of EWTN, answered this question, “Who is my mother?” many, many times for countless souls. A young woman named Markie Works came to know the tough-talking nun when her cocaine addiction had her “begging God for death.” Markie’s own mother had been fatally shot in the head by an uncle when Markie was only 18 months old, and her life since then had been wrought with abuse and sorrow.

A flip of the channel and Markie stumbled on Mother Angelica’s talk show. “Oh forget this,” she thought, but for some reason she kept watching. The humble-looking nun listened attentively to a caller who had suffered greatly, having been mistreated and rejected by her own mother. Markie leaned forward in her seat, wondering what kind of advice Mother Angelica would offer. Personally, I bet Markie expected the nun to suggest a certain prayer or direction to read the Bible. Instead, Mother Angelica leaned forward, looked lovingly into the camera lens, and said: “It’s all right honey. I’ll be your mother now.”

“Who is my mother?” Jesus still asks us today. And if you pay attention, he has many faces, some of them dirty, lonely and unloved.

But maybe it’s your own wounded soul that’s full of longing. If it is, search no further than our own Blessed Mother, whom Christ gave us to share: “Behold thy mother” (John 19:27).  But also look to the many wise sisters and saints, like Mother Angelica, Mary Magdalene, Blessed Dorothy Day (just a few of my favorite prayer warriors) and all of those who live in the eternal reality that doing the will of the Father – even more than a bloodline – is what makes us family.