5 Saints who will bring joy and humor into your home 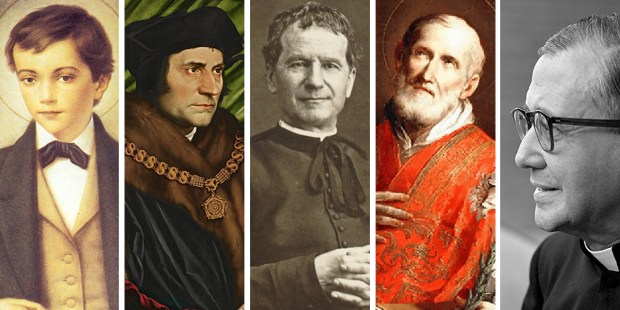 These saints taught others to be joyful, even on difficult days.

Christians are not always known for their joy, which is unfortunate. Joy and good humor was a key element of many saint’s lives and they taught others to remain joyful, even in the midst of difficulties.

Pope Francis has similarly stressed this idea, writing in his apostolic exhortation, Gaudete et exsultate, “Far from being timid, morose, acerbic or melancholy, or putting on a dreary face, the saints are joyful and full of good humour. Though completely realistic, they radiate a positive and hopeful spirit.”

Here are a few saints who expressed this joy in their lives.

1
St. John Bosco and his Society of Joy

St. John Bosco is widely known for his joyful attitude, something that was part of his personality when he was a boy. Early on in his life he started what he called, a “Society of Joy.” Henri Gheon explains in his book, The Secret of Saint John Bosco, members “met in the evenings at the home of one or another of them to read, pray, learn, receive one another’s advice or correction … Once their duties were over, they were out in a body on the roads, singing, laughing, visiting wayside chapels, picking bilberries and wild strawberries in the woods.”

Bosco was fond of being an acrobat and putting on shows to delight his friends. This joyful attitude continued into his adulthood and he later wrote in a letter, “I am a man who loves joy and who therefore wishes to see you and everybody happy. If you do as I say, you will be joyful and glad in heart.” The key to joy for Bosco was living for God, which brought a lasting joy.

2
The joy of St. Dominic Savio

St. Dominic Savio was a student of St. John Bosco and similarly adopted an attitude of joy. He said once to a friend, “You should know that here we make holiness consist in always being cheerful. We just try to avoid sin, which is the great enemy that robs us of the grace of God and peace of heart, and we try to fulfill our duties exactly.”

He would also try to cheer up his friends whenever they looked gloomy and was known for his joyful story-telling ability.

Savio was known by the other boys for his joyful attitude, even in the midst of difficulties.

3
The smile of St. Thomas More

St. Thomas More had a joyful approach to life, even when he was being persecuted by everyone around him. His unique approach to life can be glimpsed in a prayer he composed entitled a “Prayer for Good Humor,” which is reprinted below.

Grant me, O Lord, good digestion, and also something to digest.
Grant me a healthy body, and the necessary good humor to maintain it.
Grant me a simple soul that knows to treasure all that is good
and that doesn’t frighten easily at the sight of evil,
but rather finds the means to put things back in their place.
Give me a soul that knows not boredom, grumblings, sighs and laments,
nor excess of stress, because of that obstructing thing called “I.”
Grant me, O Lord, a sense of good humor.
Allow me the grace to be able to take a joke to discover in life a bit of joy,
and to be able to share it with others.

4
The joy of St. Philip Neri

St. Philip Neri is commonly known as the “patron saint of joy,” and the “humorous saint.” He enjoyed poking fun at himself using humor to maintain his humility.

According to author Shaun McAfee, “Neri was known to show up to important events with half his beard shaved, give incorrect walking directions to his disciples, read a book of jokes … When he did each of these things he caused a mix of emotions in others, but it always ended up producing the same end state: increased humility, and increased patience.”

St. Josemaria Escriva led a joyful life and taught others to share his Christian optimism, frequently writing on the topic, such as the quote below from Furrow.

The task for a Christian is to drown evil in an abundance of good. It is not a question of negative campaigns, or of being anti anything. On the contrary, we should live positively, full of optimism, with youthfulness, joy and peace. We should be understanding with everybody, with the followers of Christ and with those who abandon him, or do not know him at all. But understanding does not mean holding back, or remaining indifferent, but being active.

Read more:
How we can be humorous and holy at the same time