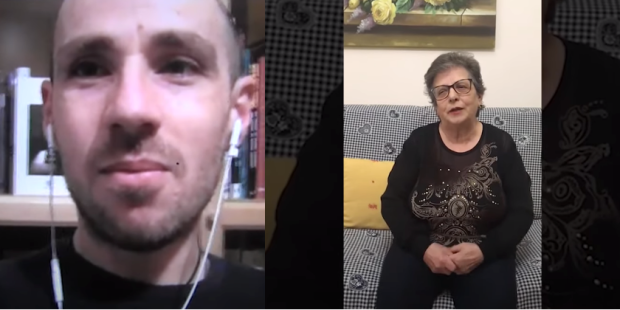 Happy accidents can be God’s way of helping us spread love to those who need it.

Happy accidents are a real thing. From something as important as the discovery of penicillin to the whimsy of Bob Ross’s optimistic approach to mistakes while painting, an unexpected benefit can arise from our unintentional actions if we’re attentive to the opportunity.

That’s what happened at the end of April to Giovanni Denaro, a lawyer from Palermo, in southern Italy, who tried to call a local court but accidentally dialed the wrong number.

Within three rings, he realized his mistake and quickly ended the call. However, on the other end of the phone was an elderly woman named Annamaria, who had been waiting for the phone to ring. She hadn’t managed to pick up the phone in time, but she called back immediately to see who it was.

Speaking via video call to the local edition of Italian news outlet La Repubblica to share the story, Giovanni relates, “I heard the voice of an old woman asking me why I had called her. When I explained my mistake, I noticed the disappointment in her voice: ‘I thought you wanted to wish me well. You know, today I turn 80 years old.’” Giovanni wished her a happy birthday before ending the call.

Annamaria had been hoping the call was from a member of her family, or a friend—understandable under any circumstances, but especially during the quarantine due to the coronavirus. Living alone, she was looking forward to having some contact with others on the landmark occasion of her 80th birthday.

Giovanni shared the story on Facebook and one of his friends, a kind and thoughtful person, saw this mistake as an opportunity, and suggested, “Let’s all give her a call!” Soon, Annamaria had received dozens of calls from complete strangers, all wishing her a happy birthday.

She told La Repubblica that she was very pleased that what had begun as a mistake had given her a birthday “different from any other,” with so many people contacting her and congratulating her, in addition to her own children.

It was a small thing really, which cost little effort from Giovanni and his friend with the idea. It cost even less to the many friends who enthusiastically welcomed the proposal and called Annamaria to wish her well. Yet it brought great happiness to a woman who, like so many of us, is struggling with isolation at this time.

Relationships, expressions of affection even from a distance, and communicating love are necessary for every human being. This need is perhaps most clearly seen in newborns and the elderly when they are deprived of it: They deteriorate precipitously.

It’s not enough for us to be fed, cleaned, and dressed. We need other people. We need relationships. Indeed, we need a whole fabric of relationships that nourish us in our most vital and radical needs: to be recognized, loved, and sought after for the simple fact that we exist in the world and we are good.

So, happy belated birthday, dear Annamaria! And let’s all be attentive to reaching out to people we encounter, even in unexpected ways, to recognize and appreciate them for who they are. Happy accidents can be God’s way of using us to send love where it is needed.

Read more:
Watch this viral video of a heart-warming elderly couple in quarantine