St. Gianna’s son: “She is not only a saint because of her heroic deed” 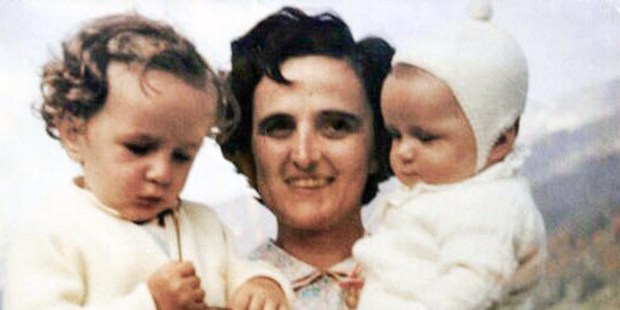 Pierluigi remembers his mother, but also tells of how their relationship continues …

Pierluigi Molla and his sisters Laura and Gianna are among the few people in the world who can pray to their mother and can address her as “saint.”

Their mother is Gianna Beretta Molla, the woman canonized in 2004 by John Paul II after she bore her daughter to term (also named Gianna), even knowing that doing so meant risking her own life. Her daughter survived, but St. Gianna died not long after giving birth.

It was an extraordinary and heroic gesture, one that is perhaps questionable in the opinion of those who don’t see it through the eyes of faith. It can be best understood by listening to the emotional and moving portrait of the saintly doctor, offered by her own son.

Pierluigi, a 59-year-old businessman in Milan, Italy, dispels any doubts or misunderstandings:

“Mom had an extraordinary love of life, not of death. But precisely for that reason, she couldn’t give more importance to her own life than to that of my sister, Gianna Emanuela.”

The Molla family was happy, united, and well-off: the father, Pietro, an engineer, ran a match factory in Magenta, not far from Milan; Giovanna, the mother, called Gianna by everyone, was a pediatrician in nearby Mesero.

Both grew up in large and deeply Catholic families. Both were members of Catholic Action. They met in 1954 when she was 32 years old and he 42, and less than a year later, they were married.

In 1961 Gianna became pregnant again: while she was in her second month, she discovered that she had a large fibroma in her uterus: a tumor that, although benign, had to be removed urgently. The uterus needed to be removed, which would of course result in the death of the baby. The only other option was to wait, with plans to use a surgical technique that could create dangerous complications at the time of delivery.

Gianna could have morally chosen the hysterectomy. As a consequence of this life-saving procedure, the child would have died, but under the principle of “double effect,” the child’s death would have been merely foreseen and accepted rather than chosen for its own sake. In other words, the baby would not be “aborted,” which is the direct intentional killing of the child. Since Gianna’s very life was at stake, the principle of double effect may well have been invoked.

Nonetheless, Gianna didn’t hesitate: She chose to have the kind of operation that would not endanger the life of her child.

“It was a choice consistent with all her training, dictated by her faith,” explains Pierluigi, “but also, I sincerely think, from her deep love for children, from her desire to increase her family.”

As the end of her pregnancy approached, Gianna told her husband: “If you have to choose between the child and me, don’t hesitate: choose—and I demand it—the child.”

She was a doctor, and knew very well what she was risking: “I remember well how she kissed us for a long time before going to the hospital to give birth, aware that it could be the last goodbye;” says Pierluigi who was only 5 years old at the time. “But at the same time, she hoped that everything would work out for the best: before being hospitalized she’d chosen some clothes from a catalogue that her father had brought her from Paris; she trusted she’d be able to order them on her return.”

Unfortunately, immediately after the Caesarean section, the dreaded complications arrived, and Gianna died on April 28, 1962, of septic peritonitis, seven days after giving birth to Gianna Emanuela. She was 39 years old.

Soon the story began to become known beyond Magenta’s borders. “A few months after her death,” recalls her son, “the Province of Milan awarded a posthumous medal to her for her professional commitment as a doctor.”

“Cardinal Giovanni Battista Montini was present at the ceremony, and he was very impressed by the story of my mother.” When he became Pope Paul VI, he wanted the canonical process to begin; it concluded under John Paul II with her beatification in 1994 and the proclamation of her sainthood in 2004.

St. Gianna was proclaimed, alongside John Paul II, co-patroness of the World Meeting of Families held in September of 2015 in Philadelphia

“We are very moved by her close association with Pope Woityla: Mom was the last saint he raised to the altars. After her canonization, this matter of the World Meeting of Families was the most important recognition given to her,” Pierluigi explains.

“In the USA, she’s well known: there are three parishes dedicated to her. The first is in St. Louis, Missouri; the second—I was present at the inauguration—near Atlantic City; and the third was recently inaugurated by my sister Gianna.”

“Also dedicated to her are the so-called ‘Gianna’s House’ pregnancy resource centers and maternity homes. I visited one in North Dakota. For this reason, many babies helped to be born thanks to these centers are baptized with the Italian name Gianna.”

After his mother’s death, Pierluigi and his sister Mariolina were sent to boarding school in Imperia (northwestern Italy) to be near a sister of their mother who was a nun. The two younger girls, Laura and Gianna Emanuela, remained in Magenta instead, cared for by their father and grandmother.

Two years after their mother’s death, the family was struck by another tragedy, with Mariolina’s death from a sudden and severe kidney disease. But the faith of their father Peter, who passed away in 2010 at the age of 98, never wavered: “I’ve never heard him say something like: ‘God, why all these trials?’ On the contrary, he supported us by reminding us that Mom was still with us, listening to us. He repeated it to me, even during the funeral,” Pierluigi remembers.

“The fact that we lost Mom when we were so young deprived us of her physical presence. Of course, this was and still is a great sorrow. But the very singular event that brought her to the altars has made her even more present in our lives. It also helped us to get to know her better.”

Pierluigi, Laura and Gianna Emanuela are continually called to share their testimony in meetings and conferences, in Italy and abroad. “There are very many requests. Gianna Emanuela, who’s also a doctor and a mother, has left her job and dedicates herself full-time to this activity and to the Foundation that we’ve created to keep alive the memory of her writings and to collect testimonies.”

St. Gianna’s intercession is responsible for two miracles officially recognized by the Church, both of which occurred in Brazil and are linked to “impossible” pregnancies that had a happy ending. “But letters continue to arrive from all over the world with cases of graces received. They’re all moving and extraordinary stories.”

Gianna Beretta Molla, a “saint of life and of family,” is anything but a traditional “angel of the hearth” and breaks several stereotypes regarding the usual “icon” of a holy woman. “She was a modern and dynamic woman,” Pierluigi points out. “She enjoyed the good things in life: she loved skiing (she taught me), she was a good alpinist, she liked music—she played the piano and the accordion and attended concerts at the Teatro alla Scala—and she painted. She liked to dress well. She drove her motorcycle and car, and was even quite reckless. And even though she had a family of three children, she didn’t give up her profession, which she exercised with passion and as a true vocation. She is not only a saint because of her heroic deed, but because she knew how to live her life to the full.”

Pierluigi smiles peacefully: “When I pray, as is natural, my first words are for her: sometimes she listens to me, sometimes less so …”

Text by Paolo Rappellino, adapted from Credere with permission.