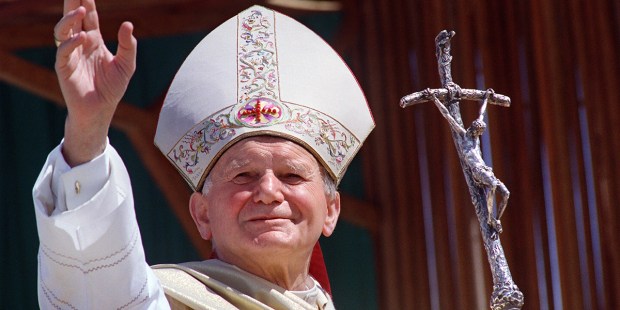 An interview with Catholic author Patrick Novecosky on his forthcoming book on the legacy of Karol Wojtyla.

What could have been a relaxing time on the beach in Cancun turned into a trip to Rome for author Patrick Novecosky. And that turned into so much more.

Novecosky won a raffle, and the grand prize was a trip to Mexico. He asked if he could switch it to a flight to Rome. While in the Eternal City, he had a golden opportunity to meet Pope John Paul II, and that led him to a lifelong study of the pope’s life, work and teaching.

Now, on the centennial of the birth of Pope St. John Paul II, May 18, Novecosky, a veteran Catholic journalist who is now Managing Partner at the communications firm NovaMedia, has published 100 Ways John Paul II Changed the World (Our Sunday Visitor). He spoke recently with Aleteia about John Paul II’s legacy.

In the introduction to your new book, you describe the unique way you got to know Pope John Paul II. Tell us a little about that.

I was working for the Marians of the Immaculate Conception in Stockbridge, Massachusetts, and every Christmas they had an employee raffle. I bought a few tickets, and the grand prize that year happened to be a trip to Cancun. I won the trip, but I didn’t have any desire to sit on a beach in Cancun, so I asked the travel agent who had donated the prize if I could exchange the ticket for a trip to Rome. They said sure.

This was Christmas of 1996, so in the spring, I arranged my trip to Rome, and my boss, who was director of the Marian Helpers Center at the time, said “Since you’re going to Rome, you might as well stay at our house there, and do some work for us in Eastern Europe, because John Paul had asked the Marians to lead the re-evangelization of Eastern Europe, since they had priests and brothers behind the Iron Curtain throughout the Soviet era. The Marian Helper magazine was to be the Marians’ fundraising tool and awareness building tool for their mission, which is Mary and Mercy and John Paul’s call to re-evangelize Eastern Europe.

So that was the purpose of the work portion of my trip. In the course of planning for that they said, “Oh by the way, would you like to meet the pope?” I said, “Well, if there’s a list, put me on it — please! You don’t even need to ask.” The superior general at the time had a long history with John Paul; they had taught together at the Catholic University of Lublin, and when [Karol Wojtyla] became bishop, archbishop and pope they retained that friendship. So the Marians, when they would go to Rome, would regularly have a private audience with John Paul and attend Mass in his private chapel. If you were a priest or bishop and you were in Rome, you requested a seat in his chapel for Mass and you would greet him afterwards, and if you were a lay person, if there was a seat left over, you would be put on the list, and they would call you the night before.

So I got the call and I was off to see the Pope. That was followed by about four weeks of traveling through Eastern Europe, gathering stories. I came back and wrote those stories over the course of a year. They were very successful, so they sent me back to Rome again in 1998, back to Europe again in 1999, and I met the pope again in 2000. I got married in 2002 and met the pope on my honeymoon with my bride in 2002.

In what ways did he have a direct influence on your life and faith and that of your family?

There was certainly more of an indirect influence in my childhood. I come from a Polish-German family. I think my parents saw themselves as more German than Polish, even though we had the Polish last name, because all my grandparents all spoke German.

But knowing that this was a Slavic pope from that part of Europe where my ancestors came from 200 years ago certainly had an impact. We saw growing up that this was a pope who was doing things differently. He was more on the world stage than his predecessors, and he was making a difference in the culture — not just the culture of the Church but of the world.

The direct influence was a little later. He came to Canada where I grew up. He’s the only pope ever to set foot in Canada. That had a big impact because it was wall-to-wall coverage of John Paul II’s trip across Canada. The entire country stood up and took notice of this man and his teaching. I was not what I would call a devout Catholic growing up. My family went to Mass every Sunday. We went to confession every month or so, but it wasn’t until later in my life that I really embraced Catholicism — I was in my mid to late 20s, and that’s the point where I started to pay attention to John Paul II, who he was, what he was teaching, how [that teaching] was changing the world. And as I grew in my faith and learned what it meant to be a Catholic in the modern world, I grew to admire him and become in awe of him, really, because of how he had such a firm grasp of human nature, of where humanity was at this moment in history, and how he was able to inject Christ and the truths of our faith into our culture, into politics, into economics — really, about every field of human interaction he had something really profound to say.

In considering the ways he changed the world, how did you determine what were the most important?

About seven or eight years ago I started giving a talk on how I met John Paul II and how God had arranged for that to happen. I realized that I needed to add more of him, so I came up with this list of his Top 10 Gifts to the Church. I refined them a little over the years. I’m friends with several JPII scholars. I would share the list with them and get their feedback. I tweaked it, I moved things around and finally came up with a list that I felt comfortable with, saying these are the most significant ways John Paul changed the world.

About a year ago I realized that his hundredth birthday was coming up, so I started putting together a larger list and contacting Catholic publishers. I started writing the book on July 1 last year and I had a list of about 70. As I read more about John Paul, the list grew very organically. It grew to well over 100 ways.

I already had my top 10. I started with religious liberty, simply because that was a very significant contribution he made to the 20th century, and from there, basically 100 to 11 are not in any order or rank, necessarily, but I tried to have them flow as a narrative that made sense, one connecting to the other.

For example, I would talk about the dignity of marriage, and flowing from that the next chapter is on the defense of the family — two distinct things, but they kind of connect together. That was followed by the gift of motherhood and the protection of the unborn. I tried to make it thematic, in a sense, that the first 90 would connect with each other and flow in a way that just made sense.

Thinking about the ways John Paul changed the world, which ones move you the most?

They all do, but I think his contributions to humanism, personalism and how he had a correct understanding of the human person, of human anthropology. That stood in stark contrast to the direction the culture was going. He basically said, “Wait a minute: your understanding of who we are as human persons is intrinsically flawed, and this is the way God created us and this is why.” That comes through in everything from his statements on care for the elderly to the teaching on the theology of the body and human sexuality, the dignity of the human person, marriage, motherhood, understanding of fatherhood and priesthood. All that flows from who we are as human persons and how God created us in his image and likeness.

As scholars continue to look at this world-changing pope, is more coming to the surface about him?

I don’t think there’s anything yet to be discovered about his life, but I think there’s so much about the richness of his teaching that has yet to be unpacked fully. I think that until the end of time the Church will be studying John Paul II. I do believe he will be named a doctor of the Church, possibly within my lifetime.

This area of the human person, simply because it stood in such stark contrast with the culture and that it draws from the riches of Catholic teaching going back to people like Aquinas and Augustine, drawing from that and expanding on that.

He died 15 years ago. Do you think he could have foreseen some of the things we are witnessing today — for example, the rise in the percentage of “Nones,” the increasing isolation brought about by a greater reliance on mechanization (the internet included), the loss of a sense of the supernatural, etc.?

Yes, I think he could have foreseen that, simply because there were markers of that in the culture through the 1990s and turn of the century. He did address several of those things: the isolation, the loneliness that humanity experiences and how we’re made for community and made for God, ultimately.

The rise of the internet took place during his era, but it was pre-social media. He had such a good understanding of human nature that he saw a lot of this coming.

What do you imagine he would have done or said in the face of a pandemic such as the one we’re going through now?

It’s tough to speculate what he would have said, but he probably would have drawn on several of the themes of his pontificate, such as “be not afraid,” “put your trust in God,” and “trust in God’s mercy.” I think he probably would have called for people to pray the Rosary, renew their devotion to Our Lady. He was such a Marian pope: at the core of his priesthood was this reliance on Mary for everything.