A close look at the ancient Sanctuary of the Immaculate Conception of Qala, in the Maltese islands (Gozo)

Courtesy of Ministry for Gozo - VisitGozo

It is a fact that one of the most ancient Christian places of worship in Malta and Gozo is the chapel dedicated to the Immaculate Conception in Qala. This sanctuary has always enjoyed veneration by the Maltese and Gozitans, flocking to visit and pray to Holy Mary to keep them and to protect them from all evil. Throughout history, in times of natural disasters, such as earthquakes, heavy storms, drought, piratical raids, and epidemics, a great many people turned to the Immaculate Conception of Qala for refuge, comfort, and assistance. The church itself is so ancient that no one can identify the exact date of its beginnings. A number of scholars are of the opinion that the Christian church was built on the ruins of a pagan temple. Indeed, when looking at Qala and the tas-Silg site, presented in the second article (A virtual visit to the Our Lady of the Snows site in Marsaxlokk, Malta), one cannot fail to see the parallels between these two sites.

An interesting point related to the capital of Gozo, Victoria, is that a centuries-old tradition recorded by the Gozitan historian De Soldanis in the middle of the 18th century relates how the Gozitans, soon after the shipwreck of St. Paul in Malta and their eventual conversion to Christianity, dedicated their principal Roman pagan temple to the Mater Dei (Mother of God). The account is not 100% accurate, but it contains a lot of truth. During the building of the present Cathedral Church of Gozo in Victoria between 1697 and 1711, abundant archaeological remains of a temple dedicated to Juno dating from about 27 B.C. were unearthed. The area had been the site of a church dedicated to Santa Marija — the Assumption of Our Lady — from time immemorial. In 1435, the said church was the matrice or major church of the whole island of Gozo.

When it comes to the Immaculate Conception of Qala, it is paramount to highlight the ancient sacred worship connected to this Sanctuary, which has its origin in the very distant past. This holy place used to fulfill the spiritual duties of eastern Gozo (the ‘Ogygia‘ in Homer’s Odyssey, where the mythological nymph Calypso lived), from where the sun rises, also revered as a god in ancient times. This explains why there have always been pilgrims and hermits linked to this Sanctuary. It is also worth mentioning the remains of a Neolithic temple dating back to around 3500 BC, where the ‘Great Mother’ was worshiped in a tradition originating from western Europe, .

Read more:
A virtual visit to the Our Lady of the Snows site in Marsaxlokk, Malta

According to the apocryphal Acts of Peter and Paul, St. Paul left for Rome from ‘Gaudomelete,’ therefore from Gozo. In 317, the Gozitans made an offer to Emperor Constantine for the baptistery of the Lateran. During this early time, Malta was part of the ‘Ecclesia Africana’ with followers of St. Rossinjan (a disciple of St. Augustine) who had come to Malta from North Africa.

The Qala Sanctuary can be traced back to the 6th century, during the time of the Byzantines (535-870) under Belisarius, hence also the time of Bishop Julianus of Malta (553-592). It is also clear that the Qala Sanctuary existed during the Arab era from 870 to 1222. In 870, the Arabs had conquered Sicily as well as Malta from the Byzantines. So, it is no surprise that over the years various historians have written about the importance of the Qala Sanctuary. It is said that when the Normans arrived in Malta in 1091, Count Roger II, son of Roger I of Hauteville, prayed in this chapel. Records also show that the Christian faith remained under Tankredi (1189-1194), the Swabians (the Hohenstauffen -1194), the Anguvins (1266), the Aragonese (1283), the Castilians (1412), and also under the Feudal Lords until 1427, and the Hapsburg dynasty until 1530.

During his pastoral visit in 1575, the Apostolic Legate, Mgr. Pietro Dusina, sent by Pope Gregory XIII to report about the state of the Church in Malta after the Council of Trent, found the church almost in ruins due to the frequent raids conducted by the Muslin Barbary corsairs on Gozo. In fact, the church was declared ‘profaned’ and closed. Nevertheless, the devotion to Our Lady of Qala continued, and it was always a question of time for the church to be restored again.

Consequently, the good people of Gozo contributed heavily and they themselves volunteered to restore the Marian chapel, built an adjoining sacristy, and constructed a parvis in front of this lovely chapel. During his visit from January to March 1575, Dusina visited 430 churches and chapels, of which 168 were dedicated to the Blessed Virgin, and 68 of these to the Assumption of Our Lady, including this one.

Many are those who claim that the original painting of the Assumption inspired the painter of the Madonna ta’ Pinu [The National Marian Shrine for the Diocese of Gozo — which is known throughout the world and renowned for apparitions and miracles]. During the 17th and 18th centuries, the inner walls of the Sanctuary were covered by ex-voto images and other religious symbols, most of them made of silver or gold. These were later sold to fund the restoration and redecoration of the chapel itself. On the façade of the outer walls, there are graffiti etched in stone. These consist of images of sea vessels, crosses, and various dates. The fact that the vessels are of all sorts and ages, ranging from galleons to carracks and lateen-sailed sloops, is proof enough that they were incised by mariners and their families who were too poor to purchase costly ex-voto images.

On November 21, 1615, the Maltese Bishop Baldassare Caligares of the Sovereign Military Order of St. John of Jerusalem changed the title from Our Lady of the Assumption to that of the Immaculate Conception, also to fulfill a vow he had made to Our Lady that he would spread the devotion to this title of the Virgin. The new titular painting too was a gift from Galigares himself, as thanksgiving to God for being elevated to the Episcopate.

There are several legends linked to this chapel. One of them is that of St. Konrad (San Kurradu or Karrew), who may be St. Konrad Canfalonieri of Piacenza, who died in 1351. This legend says that a holy man by the name of Karrew from another land lived in Malta. He lived a holy life as a hermit in a cave in Valley of Honey in Mosta. Some shepherds from the locality tried to tempt him and make him fall in sin. After they tried several times, Karrew tried to correct them, but they reacted by throwing stones at him. Because of this, he had to leave Malta and continued living as a hermit in Qala, Gozo, where he died, and was buried in the crypt of this church. After some time, there was word that this holy man began performing miracles on sick children, and this crypt became a place of great devotion. Indeed, there were also people who would go to the crypt to collect some dust to cure family members who could not go to this chapel due to their sickness. Devotion to this holy man still exists to this day.

Another incredible happening is that of January 11, 1693, when the Maltese Islands experienced the biggest earthquake in its history. While many buildings were completely destroyed, the Sanctuary was barely damaged. This is also shown in documents related to a pastoral visit in 1698.

On August 1, 1954, the 100th anniversary of the proclamation of the Dogma of the Immaculate Conception by Pope Pius IX, the painting was solemnly crowned by the Bishop of Gozo, Mons. Giuseppe Pace. On the 25th anniversary of this coronation, August 4, 1979, a solemn function was held, and a precious stellar crown was placed around the head of Our Lady of the Immaculate Conception. 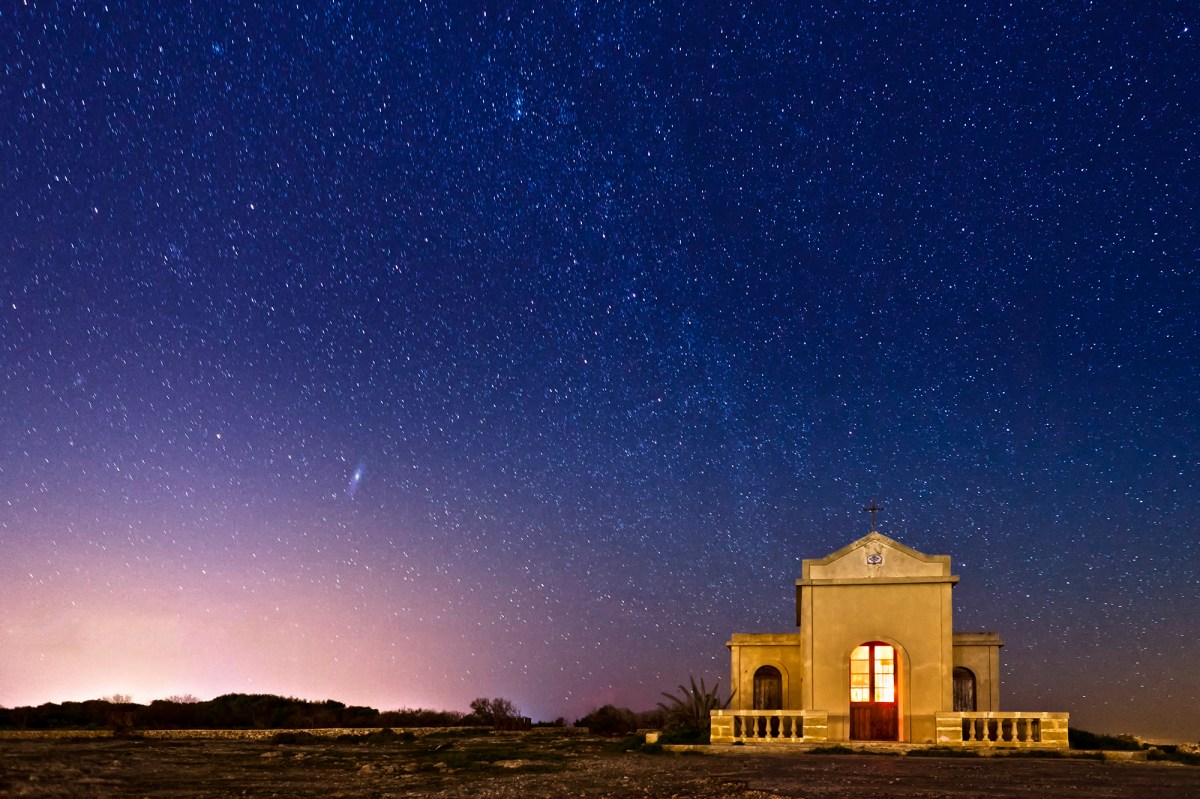 Bezzina J., “Marian Devotions in the Islands of St. Paul – The Veneration of Our Lady in Gozo”