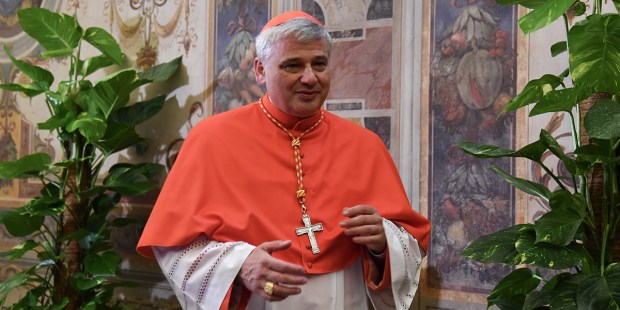 On behalf of Pope Francis, papal almoner solicited donations during Holy Week for victims of coronavirus.

Ask and you shall receive. And sometimes you shall be surprised.

The Apostolic Almoner, the bishop at the Vatican charged with overseeing the pope’s charitable outreach, approached fellow bishops in April, asking if they might like to donate to a special fund for assistance to victims of COVID-19. It was Holy Week, and the pandemic of the novel coronavirus was intensifying.

The official, Cardinal Konrad Krajewski, said this week that some of the bishops he approached ended up giving the equivalent of a month’s worth — or even two — of their salary.

“There was a great response,” Cardinal Krajewski told Catholic News Agency. “It exceeded all of our thoughts.”

Krajewski wrote April 6, two days after Palm Sunday, to prelates who are members of the “Papal Chapel” to show their solidarity with those suffering during the pandemic by making an offering, Vatican News reported at the time. Members of the Papal Chapel assist the pope in his functions as the spiritual head of the Church, especially in ceremonies and liturgies.

In this way, the pope’s official almsgiver said, they would “be united intimately and in a special way” to the pope. Cardinal Krajewski said that the Holy Father would decide on the beneficiaries of the alms collected, according to Vatican News. In the CNA article, he gave Romania as an example, as well as Zambia, which would receive a shipment of ventilators.

The cardinal told the news agency that he also received donations from people within the Vatican whom he hadn’t approached, such as a group of policemen.

“It was a heartfelt response because it was a particular moment: Holy Week during the coronavirus,” he said.

Krajewski made the request, apparently, because the pandemic prevented members of the Papal Chapel from assisting the pope during Holy Week liturgies. The special fund could be a way for them to be spiritually united with him. The Polish cardinal invited them to make a contribution in order to share in the sufferings of “those in trial” during the health emergency.