Josh Garrels offers hymns of peace in a time of fear 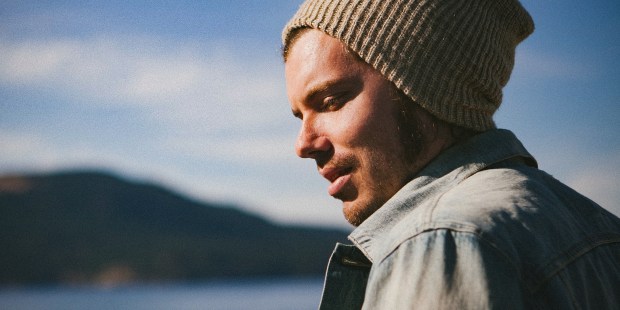 The indie singer-songwriter’s new album is a timely, holy, and altogether beautiful invitation to the world into a spirit of prayer.

Amid the deluge of data in recent months—health data, jobs data, economic data—there was one underreported data point that, in a way, tells us everything we need to know: Google searches for “prayer” recently skyrocketed worldwide. Whatever else they are, people are afraid, and they’re turning to God for peace.

Peace To All Who Enter Here, a new acoustic album of hymns and worship songs from Josh Garrels, is a timely, holy, and altogether beautiful invitation to the world into a spirit of prayer—and a peace the passing world can’t give.

Garrels—an indie singer-songwriter whose carefully orchestrated, hauntingly lyrical albums are easily the best on offer in popular Christian music today—first announced the album on social media along with a short video of his family in quarantine: “In March we enjoyed the change of seasons from blustery winter to rain-filled spring, but also experienced a new form of family togetherness as our collective quarantine began. In March I also took a few weeks to record a simple album of hymns, worship songs, and some covers of my friends at home in our garage. . . . The album is called Peace To All Who Enter Here and my hope is that it will bring some peace and comfort to y’all.” The album, he added, would have an exclusive “name your price” release on Bandcamp before the official release date on May 22.

On the Bandcamp page, Josh’s wife notes that the title comes from a brass plaque in their home, then reflects on the album and the faith that animated it:

when we enter into praise in times of uncertainty, we feel God’s goodness, the everything in His hands. His peace is a real, sustaining thing. josh began these days by firelight in the garage, mornings of prayer while winter melted away into hopeful spring. in the afternoons he’d turn on the recording gear & sing out praises. you’ll hear the click of the wood stove, the chirping of birds, our five children playing in the front yard. there was a spontaneity to this recording, & the result is sweet.

this project began as josh & a guitar, but then a virtual community joined in. so now there’s a full band, all recorded independently. . . . here’s a collection of hymns, praise songs, & covers of friends’ worship songs. we hope you encounter the peace of Christ as you enter here, finding hope & faith restored in these turbulent times.

Peace may be more spontaneous and straightforward, but there is a soulfulness and depth in these recordings that is really remarkable.

The album opens with a gentle cover of “Turn Your Eyes Upon Jesus,” a hymn written by Helen Howarth Lemmel, and “Fear Thou Not,” a brief but beautiful acapella that, though it sounds like an old spiritual, was penned by Garrels himself. Two lovely covers of recent worship songs—Sandra McCracken’s lovely “Steadfast” and A Boy and His Kite’s “Wash Me Clean”—lead to an album highlight: a rollicking cover of the African-American spiritual “Peace Like a River,” which radiates the timeless joy of the Gospel in voices both old and young. And that’s just the first half.

But the highpoint, I think, has to be “Exalt The Lord Our God.” Garrels skillfully transforms this flat, saccharine 1991 song from Vineyard Music, drawing Cindy Rethmeier’s remarkable songwriting out into an arrangement of strings that rise, fall, and coast like birds in the summer air. With his signature falsetto, Garrels sings:

The song has become a fixture of our family’s post-dinner cleanup the past few nights, filling the house—and the people within it—with the profoundly human sound of the praise that yields peace.

If it’s true that “he who sings prays twice,” those longing for a prayerfulness to combat the encroaching climate of anxiety and fear might listen to the hymns of Peace To All Who Enter Here—but more importantly, to the One who inspired its beauty, and said: “Peace I leave with you; my peace I give to you. I do not give to you as the world gives. Do not let your hearts be troubled, and do not let them be afraid” (John 14:27).