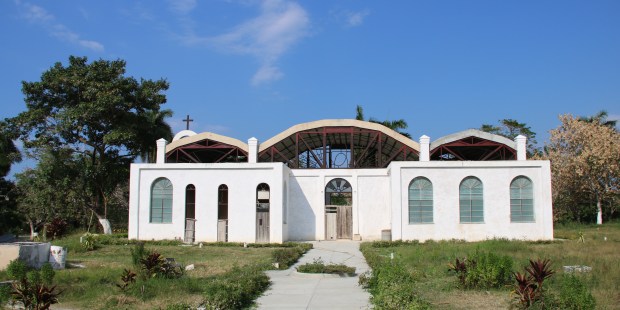 It is dedicated to Pope Saint John Paul II, whose visit to Cuba in 1998 marked a “before and after” moment in the situation of the Catholic Church in this Caribbean nation.

As Ricardo Mínguez speaks, his eyes start to fill with tears as he recalls the hardships and sufferings they have been through in the past. They have been waiting for over 25 years for this, and many of those who embarked on this venture “have left the country or are already no longer with us”, says this elderly Cuban gentleman, marked by the years and the wrinkles on his face that speak of a lifetime filled with sufferings. Ricardo is speaking about the Catholic community in the suburb of Antonio Guiteras, a community of round about a hundred individuals that was first formed in 1993 in the back yard of a private home in this suburb on the outskirts of Havana, one of the most rapidly growing suburbs since the Cuban revolution and which today numbers around 30,000 inhabitants.

The neighborhood of Antonio Guiteras is one of the local “People’s councils” (consejos populares) in the municipal area of East Havana, roughly 5 miles (8 km) from the old center of the capital. It is here that Ricardo’s dream is becoming concrete reality – in the shape of a church where the Catholic community can meet and pray. This will be the first ever Catholic church in Havana, and only the second in the entire country, to have been built on land granted by the state since the revolution of 1969. It is dedicated to Pope Saint John Paul II, whose visit to Cuba in 1998 marked a “before and after” moment in the situation of the Catholic Church in this Caribbean nation, and in the relations between the Vatican and the Cuban government in Havana. “May Cuba be open to the world and may the world be open to Cuba”, was the historic phrase used by the Polish Pope.

“We faced many difficulties to start with. For more than a quarter of a century we could scarcely speak openly about the Catholic life, but we were coming together and growing. And constantly praying for the possibility of having a piece of land on which to build a church. There were many difficulties, of every kind, but in the end President Raul Castro finally gave his signature, granting this piece of land here”,

The most recent hurdle has been the COVID-19 pandemic, which has once again brought the work to a near halt. And additionally, the lockdown means that the community will be unable to celebrate the hundredth anniversary of the birth of Saint John Paul II on May 18 this year, given that all liturgical celebrations have been cancelled since the end of March. But if there is one thing the Cuban people are accustomed to, it is not giving up in the face of adversity.

Ricardo is the “sacristan” of the present temporary church – a roof and walls of metal sheeting to protect against the wind and weather – which is already being used by the faithful on the same site where the new church is being built. As he hangs up a picture of the Divine Mercy, a devotion to which the community and the new church is also dedicated, he remarks, “Here we already have all the services that will take place in the church – weddings, communions, baptisms, and we gather every Sunday to pray together. I come here beforehand to get things ready, I set up the altar, the pictures, the chairs…”

“We will be very happy there, after so much sacrifice. We have suffered a great deal – cold, heat, discomfort. The work has been delayed by various cyclones and a hurricane, to say nothing of the tremendous difficulty in trying to get hold of the building materials. But now we can see our dream already almost fulfilled“, Ricardo explains. He was speaking to representatives of the international Catholic pastoral charity and pontifical foundation Aid to the Church in Need (ACN International), one of the sponsors of the project, during a visit before the beginning of the pandemic.

The new church is discreet, almost a symbol of the Cuban Church of the 21st century. Simple in structure, and barely 335 m² in floor area, it looks like a small architectural David, in comparison with the Goliath of the two towering apartment blocks next door, built as part of a dormitory town after the triumph of the revolution. Hundreds of apartments, from which people look down – some in hope, and others perhaps sceptically – on the progress of the building work.

The sacristan recalls every detail of everyone who has helped to equip the present makeshift church. “The Cardinal gave us 20 white chairs, a deacon gave us six second-hand benches, while other people have provided the altar cloths… I go searching round about; people give me old chairs, which I screw together and repair, and so at least we have enough chairs for everyone and nobody has to stand. On the big feast days there are more of us, but on our regular Sunday Masses we are usually around 70 or 80.”

Equally arduous and painstaking has been the funding of the new church, although Ricardo does not know that. Included in the building is the material from the altar that was set up for Pope Benedict XVI during his visit to Havana in 2012. Added to this was aid from various different Catholic organisations, among them ACN International, which has been supporting the project ever since 2014 and which has just promised a further tranche of aid of 26,000 Euros to enable the completion of the construction.

It was the late Cuban Cardinal Jaime Ortega – who died in 2019 – who himself laid the first foundation stone on March 18, 2015. Ricardo recalls that “when he came, there was nothing, but just as the Pope goes wherever he is needed, even to simple places, so too the Cardinal came here when there was nothing but a simple back yard.” During the ceremony, Cardinal Ortega emphasized the symbolic significance of this particular site, “where a Church of living stones, you yourselves, persevered in the faith… and have venerated from the very beginning the Christ of Mercy, the great devotion of the holy Pope to whom this parish is dedicated”.

Ricardo Mínguez has experienced many things during his life. With emotion he relates how he was invited to attend Holy Mass during the historic visit of Saint John Paul II. “Yes, I have lived through many things, and I am still living through them! For this is a great dream, which will soon become a reality. Some people thought we were crazy because it was all costing us so much… How are they ever going to be able to build a church?, they asked themselves. But the country has to move forward, to do new things, and look after the things that we do have. We need this church, and we will have it”, Ricardo concludes.