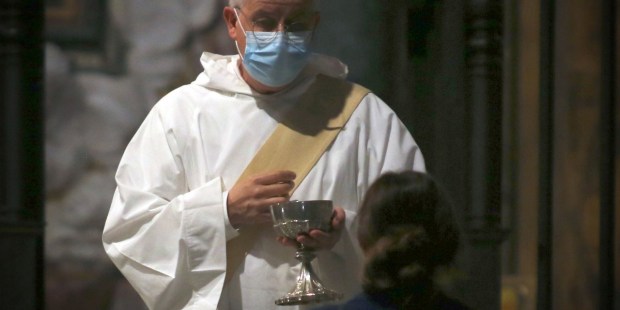 Many of these practices had already become familiar when the novel coronavirus first started coming around, and before public Masses were suspended. Another such practice — communicants sipping the Precious Blood from a common chalice — will continue to be banned.

As for reception of Communion, in most cases, people are being encouraged, if not required, to receive the Host in the palm before placing it in one’s own mouth. This is likely to be the only time people are able to remove their masks — and in some dioceses, the only time the priest will be wearing one during Mass. The Archdiocese of Newark wants people to present themselves wearing their masks, receive in the hand, step to the side, pull down the mask and consume the Host before re-masking and returning to the pew. It advises people who decide not to receive Communion, for whatever reason, to remain in their pews and pray a “Spiritual Communion,” rather than going up to the priest to receive an individual blessing.

Some dioceses recognized that some people still wish to receive the traditional way, on the tongue. The Archdiocese of Philadelphia said that there should be a separate line for such parishioners, and that the priest distributing Communion should sanitize his hands after each person receives.

The Diocese of Trenton, N.J., which has been allowing Masses to be held in parish parking lots if attendees remain in their cars, allows Communion to be distributed after Mass, at the exit of the parking lot, “preferably in the hand.”

Anushree Shirali, a nephrologist at the Yale University School of Medicine serving on a Catholic Medical Association panel, told Angelus News this week that there is emerging data suggesting that the “viral load” of the novel coronavirus in an infected person’s saliva may be higher than in the pharynx and nasal passages, potentially making the mouth “a huge reservoir” for the virus.

The Archdiocese of New York guidelines appeal: “Given the frequency of direct contact with saliva in the distribution of Holy Communion on the tongue, it is strongly recommended that every consideration should be made by each individual to receive the host reverently in open hands for the protection of all.”

In some of the Eastern Catholic Churches, Communion normally consists of small pieces of leavened bread soaked in wine. It is distributed with a golden spoon directly into the communicant’s mouth. The Ukrainian Catholic Eparchy of Stamford, Conn., issued guidelines for reopening churches, which said, among other things, that pastors should remind worshipers to open their mouth widely so that it does not come in contact with the spoon. The spoon should be sanitized after each communicant with a cloth soaked in pure alcohol. The eparchy also gave priests the option of using one disposable wooden spoon per person. Such spoons should be then burned after the liturgy.

Most if not all dioceses are continuing to suspend the obligation to attend Mass on Sundays and Holy Days of Obligation, and some also suspended the so-called “Easter Duty,” the requirement of Catholics to receive Communion at least once a year, in the Easter Season. They are also reminding the elderly, those with compromised immune systems, and people who care for the sick that they should avoid coming to church. And anyone with symptoms of COVID-19 should stay home, they added.

Because of the continuing restrictions, bishops are encouraging parishes who are live-streaming their Masses on Facebook and YouTube to continue doing so. Some are also reminding pastors of the need to stay in touch with those who cannot make it to church and to be available to bring the sacraments, particularly Confession, Communion and Anointing, to those in need.

At least two dioceses made a point of saying that there should not be any socializing after Mass, such as at a coffee hour.

The instructions for parishes to “reopen” range from a simple letter issued by Miami Archbishop Thomas G. Wenski to a very detailed multi-phase plan drawn up by the Archdiocese of Chicago for all the dioceses in the state of Illinois. Chicago’s plan envisions each pastor forming a task force and designating a compliance officer to monitor the parish’s progress in instituting and maintaining the requirements to be certified for reopening and being allowed to admit greater numbers at Mass.

While Miami offered a set date of May 26 to resume weekday Masses with congregations and May 30 for Sunday Masses, other dioceses indicated that dates would be determined when certain conditions were met, often in consultation with public officials.