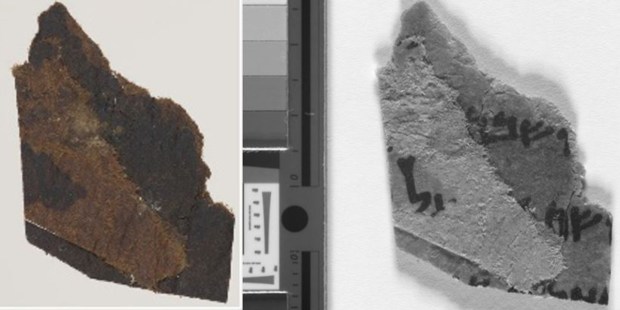 Researchers had considered the fragments to be blank scraps of paper.

A collection of fragments from the Dead Sea Scrolls that were previously believed to be blank have been shown to hold the remains of Hebrew text, thanks to the application of modern technology.

The study was performed by the Network for the Study of Dispersed Qumran Cave Artefacts and Archival Sources (DQCAAS), which explained that the fragments were donated to the University of Leeds in the 1950s for analysis of their physical and chemical composition. Because they were seen as blank bits of scrap paper, they were thought to be perfect for such analysis, which could harm the more complete scrolls.

The team explained that after sitting in storage for the majority of the second half of the 20th century, the samples were donated to the University of Manchester in 1997, where they remained for another two decades. They were given little thought until Professor Joan Taylor recently prepared to conduct a new study on their materials, but when she began examining them, she caught a glimpse of a figure that looked distinctly like a faded Hebrew letter. In the report, Taylor commented:

“Looking at one of the fragments with a magnifying glass, I thought I saw a small, faded letter – a lamed, the Hebrew letter ‘L’,” said Professor Taylor. “Frankly, since all these fragments were supposed to be blank and had even been cut into for leather studies, I also thought I might be imagining things. But then it seemed maybe other fragments could have very faded letters, too.”

Enticed by this new lead, the University of Manchester website reports, Taylor subjected the 51 fragments to multispectral imaging, which revealed clear lettering on four of the samples. The clearest of these contains 15-16 letters, most of which are only partial, but one fragment was clearly identified as the Hebrew word Shabbat, meaning Sabbath.

It is unclear what further revelations might be gleaned from this discovery, but the DQCAAS team is preparing to commence a new study on these Dead Sea Scroll fragments, which will hopefully be published in the upcoming months. Click here to read the full report.