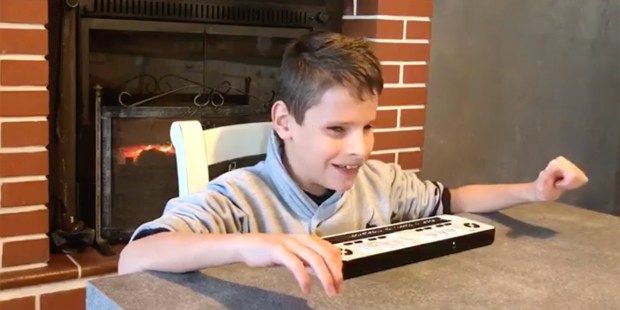 Alessandro, who has lost his eyesight, has found a way to connect with others through reading the Bible in his own way.

Recently, a friend of mine sent me a message with a simple and beautiful story. The message said,

“Look, Paola! This is Alessandro, a blind young boy who’s in catechism class. I’m sending you a video in which he reads the Gospel in Braille. He does it every Saturday, live on social media. He already reaches many people, but his dream is to get Pope Francis to watch him!”

As it happens, I know Alessandro’s catechism teacher from a pilgrimage we took together nine years ago. She talked to Alessandro’s father, who said he’d be happy for us to share his son’s story on Aleteia.

Alessandro and his normal, special family

Alessandro’s dad is Stefano, and his mom is Elisa. Besides Alessandro, who is 10, they have a 17-year-old daughter, Alessia.

I learn from Elisa—who is full of enthusiasm, spontaneity and motherly strength on the phone—that Alessia is the one truly responsible for Alessandro’s liveliness. Since he was a baby, she has given him a lot of stimulation (from hearing Elisa talking and laughing on the phone, I suspect some of the responsibility is also hers and Stefano’s!). Alessandro is a very lively, good-natured child, endowed with a certain exuberance.

When his videos were seen by Bishop Marco Busca, of Mantua, their local bishop—they live in the northern Italian town of Castiglione delle Stiviere, home of St. Aloysius Gonzaga—the bishop visited the family at their home. They were amazed and moved by the fact that he paid that much attention to them and acted with such fatherly care. Alessandro wasn’t as awed, however, and asked unabashedly, “Would you please ‘like’ my video, Your Excellency?”

Visual impairment is not the most important or interesting part of Alessandro’s story, according to his mother. Behind this disability, there is a dramatic backstory linked to Elisa’s pregnancy with him and his very premature birth.

The family thinks she probably contracted a virus in the first weeks of gestation, which passed unnoticed. It began to cause problems, but at every checkup they were dismissed as nothing, expected to disappear on their own or with minimal help.

But around 23 weeks, Elisa—who had returned to work (she is a travel agent)—started to have significant hemorrhaging. Unable to leave her job immediately, she called her sister to replace her, and went to the hospital alone. The doctors said she was at risk of giving birth prematurely. She was prescribed complete bed rest and held on as long as she could, but at a certain point, little Alessandro had to be born. She was 24 weeks and five days into her pregnancy.

He was immediately given every possible treatment according to the most advanced knowledge of neonatology and neonatal pathology. Such premature babies, however, are at high risk of every kind, including death. Their parents know this, because they are warned to be prepared for all these possibilities. Blindness, due to detachment of the retina, is not uncommon for premature babies, due to the prolonged oxygenation which the immature lungs of these little fighters must undergo.

Alessandro fought for life; almost all of his organs had been negatively affected, except the kidneys (fortunately, because kidneys are among the most critical, and if they fail, it’s especially difficult to recover). At one point, he had an intestinal problem. Little Alessandro’s bowels weren’t moving, but, after a prayer to Our Lady of Ghisiola (a local Marian devotion), Elisa met a doctor who was running around the corridor shouting with joy, “Alessandro pooped!”

He was loved and cared for by everyone. These children attract a special love; anyone who has experience with premature births knows what I mean.

Miracles are serious and specific, not sentimental nonsense. If the problem is poop, Our Lady, like all mothers, is surely unfazed. Elisa shared this story discreetly and joyfully, but for her it was a sign. It strengthened her faith which, at that point, held a lot of anger toward God.

Elisa’s mother, on the other hand, did not give up. She is known in the family as an example of praise, fervor, and Marian devotion. She prayed, insisted, and asked her daughter for updates on his condition.

Of course, Alexander survived, and besides the serious impairment of his eyesight, has no other long-term consequences. He’s an intelligent, lively young boy, who loves to be the center of attention. Perhaps he knows better than we adults that we are always, in fact, under the loving gaze of the Father.

Elisa says that life goes on, and they have all they need. Even traveling is a passion that they have continued to cultivate. Some people asked her, as soon as Alessandro’s situation was made known, “How are you going to make the trips you love so much with a blind child?” She replied, “I’ll take my children—both of them—and go. We all go together. And describe to him what I see.”

Elisa doesn’t seem like someone who is easily deterred by difficulties. Even when she couldn’t work during the coronavirus quarantine, she told me she was happy. “Who else would’ve helped my children, especially Alessandro, with all this distance learning?”

Reading the Gospel for his catechism companions

The idea of reading the Gospel of the day and uploading videos on Facebook came around the middle of March, Alessandro’s father Stefano tells me. It was a way to help Alessandro do something different and to keep him in touch with his catechism classmates, since he recently received a special display/keyboard for writing and reading Braille. Along with reading the Gospel passages of the day, he likes to tell jokes, like this one:

A gentleman runs into an old friend, or so he thinks.

“But my name is John!” he answers.

“Wow, you changed your name, too!”

Elisa recently shared with me that there is a little update regarding Alessandro’s dream: He’s not only interested in getting the pope to see his videos, but wants to meet the Holy Father himself!

I’m guessing he won’t give up until he gets his wish. In the meantime, dear Alessandro, continue to read the Gospel and tell us jokes. I recommend you keep a few special ones in your repertoire for Pope Francis!