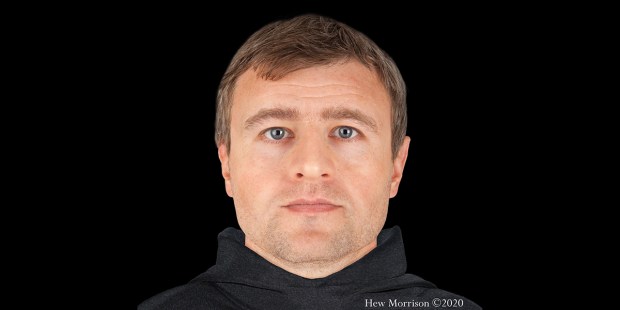 The unnamed cleric was buried with a chalice and paten.

Last September, England’s storied Lincoln Cathedral was the site of an excavation that unearthed the remains of more than 50 individuals who had been interred under the church during the building’s nearly 950-year history. At the time, Express UK reported that one of the skeletons was that of a priest, identified by the chalice and paten he was buried with, which they called “tools needed for the next life.”

Now, we’re getting a much closer and more personal look at this unnamed medieval cleric, thanks to the incredible digital editing skills of forensic artist Hew Morrison. Morrison’s worth as a digital artist is proven again and again on his Facebook page, where he shows off a collection of facial reconstructions from excavated skulls, some depicting known historical figures. His subjects include individuals from the medieval period, examples of faces from the Khmer Empire, and even one of St. Magnus.

Collecting data and photographs from Allen Archaeology, the team that conducted the excavation, Morrison was able to reconstruct the priest’s face based solely on the bones. The image is drawing praise for its extreme detail, which includes individual hair follicles and even skin pores.

In a recent interview with Express UK, Senior Manager Natasha Powers of Allen Archaeology explained that the hair and eye colors were guess work, but the age was determined by scientific study of the remains and the facial features were drawn from the contours of the skull. She said:

“He’s got close eyes and a wide head, that was determined from his skull and if you look closely, a slightly asymmetrical jaw as well.” Powers added, “The idea is not that it’s a photograph of him, but that if you showed it to someone who knew him, they would know it was him.”

The lockdown orders have slowed the archaeological efforts at Lincoln Cathedral, but Allen Archaeology said there was trove of historical delights discovered and awaiting further study.