Charles de Foucauld, a man who found God in the desert, to be canonized a saint

The Vatican announced the canonization of Blessed Charles de Foucauld, whose adventurous life included a youthful wandering away from the faith.

There are both very surprising aspects of the life of Charles de Foucauld and elements that some would consider very ordinary. Among the extraordinary might be listed the fact that he came from nobility and led quite an adventurous life. The ordinary might include Charles’ youthful wandering away from the faith and his eventual return. 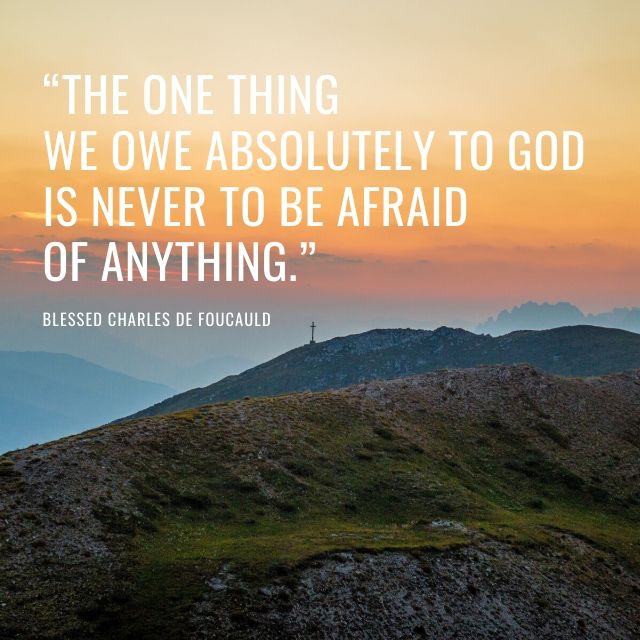 All that really matters, though, is that he has now transcended the accidents of his life and the times in which he lived and come to an intimate knowledge of the One who gave him that life. The Church he loved and served is about to confirm that. The Vatican announced today that Blessed Charles de Foucauld will become a canonized saint.

At his beatification in 2005, Pope Benedict XVI said that as a priest, Foucauld “put the Eucharist and the Gospel at the center of his life.”

“He discovered that Jesus — who came to unite Himself to us in our humanity — invites us to that universal brotherhood which he later experienced in the Sahara, and to that love of which Christ set us the example,” Benedict said.

Born in Strasbourg, France, on September 15, 1858, Charles de Foucauld was orphaned at the age of six, according to an official biography on the Vatican’s website. Charles and his sister, Marie, were reared by their grandfather, in whose footsteps he followed by taking up a military career.

As an adolescent, Charles lost his faith. At military school, he led a riotous life, indulging in unruly and eccentric behavior, according to the Jesus Caritas Fraternity of Priests, which was founded on the inspiration of Foucauld’s life and work. On one occasion, he left his post while on sentinel duty, dressing up as a beggar.

After two years at military school, he became an officer, at age 20. His grandfather had just died, and Charles inherited all his wealth. He squandered it, living the high life. In 1879, while stationed in Pont-à-Mousson, he was seen with a woman of ill-repute named Mimi. The following year, his regiment was sent to Algeria, and he took Mimi with him, passing her off as his wife. When the lie was uncovered, the army ordered him to send her back. Charles refused, preferring to be suspended and removed from duty. He went home to France and settled in Evian.

But when he heard that his regiment was involved in a dangerous operation in Tunisia in 1881, he left Mimi and asked to be reinstated. Joining a new regiment in the south Oran area, he proved to be an excellent officer, praised by his superiors as well as by the lower ranks.

Fascinated by northern Africa, he resigned from the Army and settled in Algiers in order to prepare for an exploration of Morocco. It was work for which the French Geographical Society eventually would give him a gold medal. He learned Arabic and Hebrew. Between June 1883 and the following May, he travelled across Morocco secretly, disguised as a rabbi. Though he fell into dangerous situations several times, he was impressed by the faith and devotion of Muslims.

After exploring the oases of Southern Algeria and Tunisia, he returned to France and saw his family in 1886. He questioned himself on the inner life and spirituality. He went into churches, without any faith, and repeated the prayer: “My God, if you exist, let me know you,” according to the Jesus Caritas site.

The warm, respectful welcome he received from his deeply Christian family encouraged him in his search, and under the guidance of a priest he returned to the faith and the sacraments. He was 28.

“As soon as I believed in God, I understood that I could not do otherwise than to live for him alone,” he wrote.

On a pilgrimage to the Holy Land he heard a call to follow Jesus in his life at Nazareth. He gave all his possessions to his sister and spent seven years as a Trappist monk, first in France and then at Akbès in Syria. He studied briefly in Rome, and later began to lead a life of prayer and adoration, alone, near a convent of Poor Clares in Nazareth.

Ordained a priest at 43, on June 9, 1901, he left for the Sahara, living at first in Beni Abbès. He wanted to be among those who were “the furthest removed, the most abandoned.” He wanted all who drew close to him to find in him “a universal brother.” In fact, he set out to found a community of Little Brothers of the Sacred Heart of Jesus. It was not until 1906 that someone joined the community, but the man left shortly after becoming ill.

In 1902, he drew the attention of friends and the authorities to the tragedy of slavery and ransomed several slaves.

In 1905 he moved to be among the Tamanrasset in the Hoggar and learned their language. No priest had gone into their territory before. He began to translate the Gospel for them.

Charles began to learn the Tuareg language, songs and poetry in 1907. Being the only Christian there, he was not allowed to celebrate the Eucharist. But he choose to remain, for the sake of the people. After six months, he received permission to celebrate Mass alone, but not to reserve the Blessed Sacrament.

Early in 1908, he fell ill and came close to death. The Tuaregs saved his life by sharing the little goat’s milk they had left, even though it was a period of drought. Charles, helpless, depended on his neighbors.

In 1909, he wrote, “My apostolate must be the apostolate of goodness. In seeing me, people should say to one another: ‘Since this man is so good, his religion must be good.‘”

Between 1909 and 1913, he made three visits to France to present his plan for a “Union of Brothers and Sisters of the Sacred Heart,” an association for the conversion of unbelievers. He envisioned it as consisting of “fervent Christians from all walks of life, able to make known, through their example, what the Christian religion is, and to make the Gospel ‘seen’ in their lives.”

As war raged in Europe, and Charles remained in Tamanrasset, there was unrest in the desert, including raids by Moroccans and Senoussites from Libya. To protect the local people, Charles built a small fort in Tamanrasset and moved in, waiting to receive the people from the surrounding area in case of danger. On Dec. 1, 1916, some Tuaregs, under Senoussite influence, lured him outside the fort and bound him. During the looting, there was an unexpected warning that soldiers were coming. There was panic. A shot was fired and Charles was killed.

His body was buried in a ditch that surrounded the fort. At the time of his death, Charles was alone. But in France, 49 people had joined the Union of Brothers and Sisters of the Sacred Heart, which he had succeeded in having approved by the religious authorities.

Charles de Foucauld had always dreamed of sharing his vocation with others and came to the conclusion that the “life of Nazareth” could be led by all. According to the Vatican, the “spiritual family of Charles de Foucauld” today encompasses several associations of the faithful, religious communities and secular institutes for both lay people and priests.