Knights of Columbus founder to be beatified 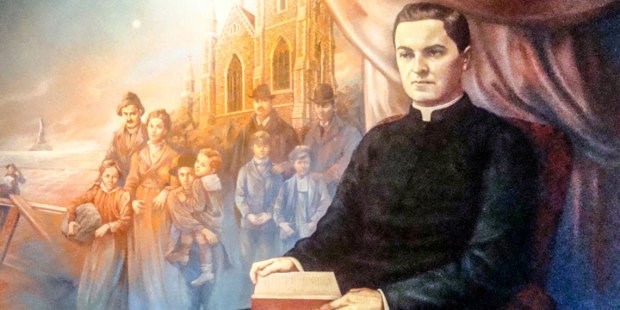 Pope Francis has recognized a miracle attributed to the intercession of Father McGivney.

Venerable Servant of God Father Michael McGivney, founder of the Knights of Columbus, is cleared for beatification after Pope Francis recognized a miracle attributed to his intercession.

Father McGivney’s is one of 12 causes that have advanced, according to a report released May 27.

Born on August 12, 1852, and died August 14, 1890, Venerable Michael McGivney was the founder of the Knights of Columbus, now the world’s largest Catholic fraternal organization.

After studies in Canada and the United States, he was ordained to the priesthood by Archbishop James Gibbons in Baltimore. He founded the Knights of Columbus as a mutual aid society, geared especially to working men and their families. He was known for his tireless work among his parishioners. He died at the early age of 38 from pneumonia.

The Knights of Columbus reported:

The miracle recognized as coming through Father McGivney’s intercession involved an unborn child in the United States who in 2015 was healed in utero of a life-threatening condition after prayers by his family to Father McGivney.

A date will soon be set for the beatification Mass, which will take place in Connecticut.

A miracle thanks to the intercession of Venerable Pauline-Marie Jaricot, foundress of the Society for the Propagation of the Faith and the Living Rosary Association, was also recognized. This clears her also for beatification.

Miracles were also attributed to three Blesseds: Charles de Foucauld, Cesare de Bus, and Maria Domenica Mantovani. The official acceptance of the miracles means that all three can now be canonized.

The Congregation also determined that Franciscan priest Cosma Spessotto was killed in odium fidei, that is, out of hatred of the faith. Father Cosma was a missionary in El Salvador who was martyred in 1980.

Finally, the Congregation recognized the martyrdom of six Cistercian monks who were killed as they tried to safeguard the Eucharist when their abbey was attacked by French soldiers during the Napoleonic wars.

The decrees on martyrdom will allow the causes of Father Cosma and the Cistercian monks to proceed.

Below, please find the text of the decree from Congregation for the Causes of Saints, interspersed with brief biographical notices (in italics) prepared by Vatican News.

Decrees of the Congregation for the Causes of Saints

On May 26, 2020, the Holy Father Francis received in audience His Eminence Cardinal Angelo Becciu, prefect of the Congregation for the Causes of Saints. During the audience, the Supreme Pontiff authorized the same Congregation to promulgate the Decrees regarding:

– the miracle, attributed to the intercession of Blessed Cesare de Bus, priest, Founder of the Congregation of the Fathers of Christian Doctrine (Doctrinari); born on February 3, 1544 in Cavaillon (France) and died in Avignon (France) on April 15, 1607;

– the miracle, attributed to the intercession of Blessed Charles de Foucauld (known as Charles of Jesus), diocesan priest; born in Strasbourg (France) on 15 September 1858 and died in Tamanrasset (Algeria) on 1 December 1916;

Blessed Charles de Foucauld was an officer in the French army. He became a Trappist monk, but left the order to live as a hermit. He was ordained to the priesthood in France, then settled in the Algerian Sahara. He evangelized the Bergers, learning their language and culture. De Foucauld was assassinated at his hermitage in 1916.

– the miracle, attributed to the intercession of Blessed Maria Domenica Mantovani, Co-founder and first Superior General of the Institute of the Little Sisters of the Holy Family; born on November 12, 1862 in Castelletto di Brenzone (Italy) and died there on February 2, 1934;

Blessed Maria Domenica Mantovani was the co-founder, with her spiritual director Fr Giuseppe Nascimbeni, of the Little Sisters of the Holy Family, dedicated to educating children and young women, and assisting the sick and elderly of the community. She became the first superior of the order, taking the name “Maria Giuseppina of the Immaculata”.

– the miracle, attributed to the intercession of the Venerable Servant of God Pauline Maria Jaricot, Founder of the Works of the “Society for the Propagation of the Faith” and the “Living Rosary”; born on July 22, 1799 in Lyon (France) and died there on January 9, 1862;

Venerable Pauline-Marie Jaricot was devoted to assisting the work of missionaries, encouraging all Catholics to involve themselves in the work of spreading the Gospel. She founded the Society for the Propagation of the Faith, dedicated to helping missionary efforts worldwide; and the Living Rosary Association, whose associates are committed to saying a decade of the Rosary each day. In 1835 she was healed of a serious illness after visiting the shrine of Saint Philomena in Italy.

Read more:
How this laywoman founded a Pontifical Mission Society

– the martyrdom of the Servants of God Simeon Cardon and 5 companions, professed religious of the Cistercian Congregation of Casamari; killed in Casamari, in hatred of the Faith, between 13 and 16 May 1799;

The Servant of God Simeon Cardon was the prior of the Cistercian abbey in Casamari, Italy. During the Napoleonic wars, French soldiers sacked the abbey, breaking into the Church and scattering consecrated Hosts on the floor. When the Servant of God, with five fellow monks, attempted to retrieve the Hosts, they were shot by the soldiers and killed.

– the martyrdom of the Servant of God Cosma Spessotto (in the world: Sante), a professed priest of the Order of Friars Minor; born in Mansué (Italy) and killed in San Juan Nonualco (El Salvador), in hatred of the Faith, on June 14, 1980;

The Servant of God Cosma Spessotto joined the Franciscans in 1940, and was ordained eight years later. Filled with zeal for missionary work, he went to El Salvador in 1950, at the time one of the poorest nations in the Americas. He preached peace amidst the violence in the country. He was killed in 1980 as he knelt in prayer in his church. He is remembered for his love of the poor and his witness to fraternity.

Read more:
7 Insights from Charles de Foucauld on going through life in peace