We have to pray even to be saved from ourselves, says pope 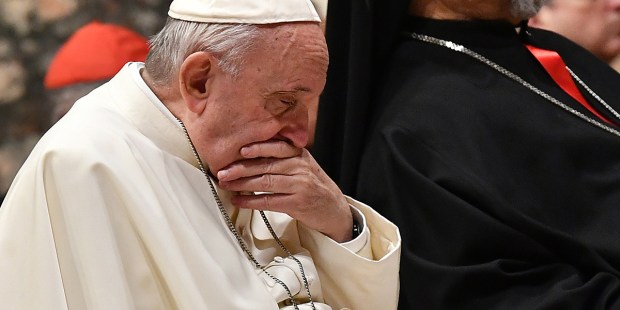 In catechesis on prayer, Pope Francis notes how the sin of Adam and Cain is contrasted by the prayer of peacemakers.

Pope Francis reflected at the general audience of May 27 about how devastating evil is present from the very first pages of Genesis. But in contrast to it, is the power of prayer.

After Adam and Eve distrust their creator and give into ambition, only to find out, as Francis said, that Satan “pays badly,” then comes Cain who feels envy for his brother.

And on and on through the generations of humanity, we see the saga of brother against brother.

Yet, in these first pages of the Bible, another story is also written. It is less apparent, humbler and more devout. It represents the redemption of hope. Even though almost everyone behaves cruelly, making hatred and conquest the driving force behind human affairs, there are persons who are capable of praying to God with sincerity, who are capable of writing humanity’s destiny in another way.

After he dies, Adam and Eve had a third son, Seth, of whom Enosh (which means “mortal”) is born. It is said that “at that time people began to invoke the Lord by name” (4:26).

Finally, there is the story of Noah, a just man who “walked with God” (6:9), before whom God withholds His plan to destroy humanity (see 6:7-8).

Reading these accounts, one has the impression that prayer is an embankment, that it is humankind’s refuge before the wave of evil that is growing in the world.

We see well that we pray even to be saved from ourselves. It is important to pray: “Lord, please, save me from myself, from my ambitions, from my passions.”

Those who pray in the first pages of the Bible are peacemakers: in fact, when it is authentic, prayer liberates us from our instinct toward violence. It is a gaze directed toward God, so that He might return to take care of the human heart.

We read in the Catechism: “This kind of prayer is lived by many righteous people in all religions” (CCC, 2569).

Prayer cultivates flowerbeds of rebirth in places where human hatred was only capable of sowing a desert.