The obscure fresco that led St. Ignatius in founding the Jesuits 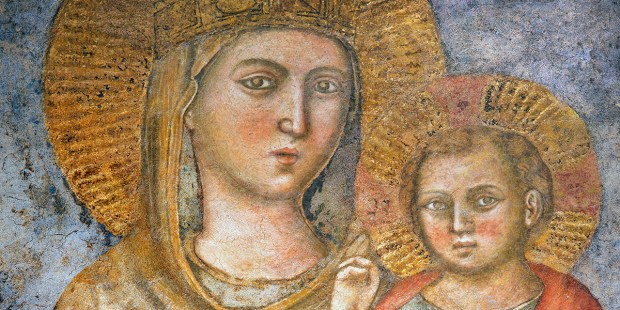 The holy priest agreed that Mary interceded for healings through devotion to her image as Our Lady of the Way.

The title “Our Lady of the Way” (Madonna della Strada) comes from a beautiful shrine kept in Rome, where a fresco (painted on wet plaster) during the 13th or 14th century was venerated. The fresco was a small painting of the Madonna and Child. For 425 years, this painting had hung in the corner of Rome’s church of St. Mary of the Way (Santa Maria dell Strada). St. Ignatius Loyola came across the painting on his first trip to the Eternal City in 1540. He preached day after day on an adjacent street corner and fell in love with the artwork.

Shortly after, Pope Paul III approved Loyola’s small band of “reformed” priests, and so was born the Society of Jesus. The Holy Father gave them Santa Maria della Strada as their home base and pastoral home. Ignatius effectively became the caretaker of the fresco.

In 1568, Cardinal Alessandro Farnese erected the Chiesa del Gesu (Church of Jesus) as the Mother Church of the Jesuits. The fresco was moved there in 1575 and placed in the chapel where the Jesuits took their vows.

Before he died, Ignatius had left instructions for the Jesuits on how to preserve the image so it could eventually be enshrined in the new church, a church he would not live to see. It ultimately was transferred to its permanent place of honor above the ornately decorated chapel to the left of the high altar. It remains there until the present time.

The Chiesa del Gesu was not completed until 1584. By then, many people had come to venerate the painting, especially as Ignatius of Loyola had agreed it demonstrated healing powers. He also gave to the Blessed Virgin credit for saving his life during a battle in 1521. It was not until the 19th century that the image was transferred to canvas and affixed to a slate panel.

In the year 2006, the Madonna della Strada was long overdue for a “cleaning.” The project quickly escalated into a much more complex task than anticipated. For starters, the image proved to be more than 200 years older than previously thought. And the quality of the artwork was much more intricate than believed.

The biggest and most profound revelations came from the work on the Madonna and the infant Jesus. Working in a makeshift studio above the church’s lateral chapels, conservators slowly dissolved centuries worth of grime, mineral deposits, varnish, and overpainting from the image’s surface. Brilliant colors began to poke their way through the cloudy old residue. After weeks of slowly but surely working a tiny piece at a time, a new Madonna della Strada appeared.

Faces once frozen tight under layers of dirt and resin reappeared fresh and lively. A rosy-cheeked baby Jesus with His little right hand raised in blessing was crystal clear. It was incredibly three dimensional as He sat in his Mother’s arm. The Virgin, wearing a stenciled crown, has a healthy complexion, a gentle face, and, as does the baby Jesus, looks at the viewer as if she is truly seeing the viewer. Experts were the overseers of the project and agreed the work was most likely from the 13 or the 14th century. It is a rare example of late-medieval Roman wall painting.

Today, freed from its 19th century “coatings,” the Madonna della Strada, aka Our Lady of the Way, is once again alive. Many more people now visit and venerate it. The icon is located between two altars, the first dedicated to Ignatius of Loyola, the second, the main altar of the church, dedicated to the Holy Name of Jesus.

Pilgrims visit the shrine every day, and many stories circulate of favors they receive from the Mother of God after praying before it. The feast day of Our Lady of the Way/Madonna della Strada is May 24.