The queen of Pope Francis’ heart 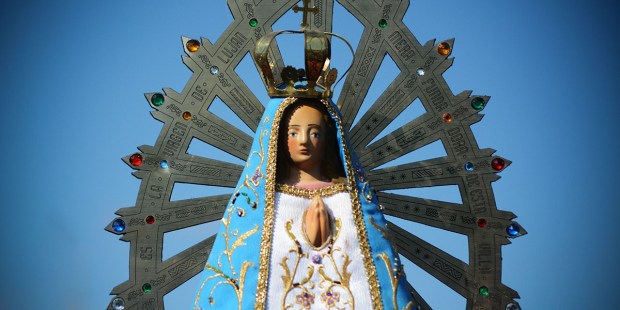 It’s well known that Pope Francis has a very special devotion to the one who is the queen of his heart: the Virgin Mary, and specifically Our Lady of Lujan, heavenly patroness of Argentina, whose feast is celebrated May 8.

In fact, it’s impossible to get a good understanding of Pope Francis’ spirituality if we don’t explore this aspect of his life and devotion.

Jorge Mario Bergoglio treasures fond memories of his paternal grandmother, Rosa Margarita, because according to his own testimony, “the one who taught me to pray was my grandmother. She taught me a great deal about the faith and told me the stories of the saints.”

It was also from his grandmother that he learned a deep devotion to the Blessed Virgin Mary, a devotion which, as he has explained on several occasions, has found expression in the daily and devout prayer of the Holy Rosary.

There is a piece of paper that he keeps as one of his great treasures. It’s a small message that Grandma Rosa Margarita left to her grandchildren, on the day of the future pope’s priestly ordination:

May these, my grandchildren, to whom I gave the best of my heart, have a long and happy life, but if one day pain, illness or the loss of a loved one fills them with grief, may they remember that a sigh to the Tabernacle, where the greatest and most august martyr is, and a glance to Mary at the foot of the cross, can make a drop of balm fall on the deepest and most painful wounds.

That image, part of the legacy he received from his beloved grandmother, shaped his Marian devotion and has been powerfully present in many of his homilies, such as this one:

Jesus looked at his mother. From the cross, he looked at her, and showed us all to her, and said, ‘This is your Son, these are your children.’ And Mary, when she felt Jesus’ gaze, must have remembered when, as a young woman, 30-something years earlier, she felt that other gaze that made her sing for joy: the gaze of the Father. And she felt that Father had looked upon her smallness. Little Mary, our Mother whom we came to see today, whom we came here to meet and to meet her gaze. Because her gaze is like a continuation of the gaze of the Father who looked upon her as a little one and made her the Mother of God. Like the gaze of the Son on the cross, who made her our Mother, who looks at us today with that gaze. And today, after a long journey, we have come to this place of rest, because the gaze of the Virgin is a place of rest, and we have come to tell her our concerns.

We need her tender gaze, her Mother’s gaze, one that opens our souls. Her gaze is full of compassion and care. And that is why today we tell her: Mother, turn upon us your gaze. Because Our Lady’s gaze is a gift, which cannot be bought. It is a gift from her. It is a gift from the Father and a gift from Jesus on the cross. Mother, turn upon us your gaze.” (Cardinal Jorge Mario Bergoglio, Homilies, Mass of the 25th Pilgrimage to Lujan, Shrine of Our Lady of Lujan, October 3, 1999)

Devotion to Mary is intimately united to his priestly heart. The heart of Pope Francis is a Marian heart. Like John, the beloved disciple, he received her in the intimate depths of his being, introducing Mary into the workings of his own existence and into all that constitutes the horizon of his own apostolate:

By receiving Mary in his home, into the intimacy of his life, the priest-disciple, in the image of the beloved disciple, centers his community life, in which he synthesizes in his person all that is the Church. Mary harmonizes all aspects of community life: the life of the Holy Family in Nazareth and the life of the apostolic community at Pentecost. … In Mary, praise and service nourish each other, as we see in the Visitation. Her intimate and unique relationship with her Son is not opposed to her relationship with him as a common disciple at the side of the other disciples. We all focus on her, and she focuses on all without noise or competition. (Bergoglio, Jorge Mario, Conferences, Commemoration of the 25th Anniversary of the Seminar “The Incarnation” of the City of Resistance, May 25, 2010)

A priestly heart, total dedication to the glory of God and the good of souls. Priestly fruitfulness, consecrated fertility, to engender children of God: this is impossible without Mary.

A Mother for all

And this Loving Mother for him, as for all people of Argentina, has a name: Our Lady of Lujan. Pope Francis himself explains to us her story, its meaning, and the devotion to her:

Here in Luján there was a gesture of the Virgin, and it does us good to remember it: in 1630, a small image of the Immaculate Conception chose to stay here. The caravan was going somewhere else, but the Virgin caused it to stop.

From that moment on, there were visits, pilgrimages, and encounters with the Virgin in this place. From that moment on, the country had a mother. … Here we learn to stop and receive life. Here, along with the Mother of Jesus, we come to rest, to entrust the lives of others to her, the lives that many were carrying in their hearts on the pilgrimage, in silence and prayer along the way. Here, the simple and believing people of our country also grew in something so characteristic of this place: solidarity and fraternity.

And with this simple manner of encounter and silence, our Mother built the Shrine: this is the House of the Argentineans. The Nation, here, grew with the Blessed Mother; the Nation has its mother here.

In this, her House of Lujan, how many have come to receive faith through baptism, to fulfill promises or to entrust their needs, their pains or their problems to her! … We are part of this history of the miracle that is ongoing and continues to be written. …

In this very holy place, full of faith and hope, we ask our Mother today to take care of our Nation—in particular, those who are the most forgotten, but who know that there is always room for them here.

This is how it was from the beginning: Our Lady took care of this Nation from the depths of her heart, starting with the poorest, those who don’t matter to the people who have enough… but here, they are taken into account. That is why the children of Our Lady in these lands never lack the protection of our Mother.

In Luján there is a sign for our country: everyone has a place, everyone shares hope and everyone is recognized as a son or daughter.

… We do not have the right to give up, to lower our arms, overwhelmed by despair. Let us remember that our Homeland has a mother, let us remember our Mother.  Let us look at the Virgin and ask her not to stop holding our hand. Thank you, Mother, for staying with us.

We hope that these brushstrokes that we have traced regarding the Marian devotion of Pope Francis will help us to reflect and to decide to be truly devoted, in an affective and effective way, to the Blessed Virgin.

The Lady of Argentina

Our Lady of Lujan is depicted in a 15-inch-tall image of baked clay, although it was plated with silver to protect it at the beginning of the 20th century.

The statue was molded in San Pablo, a city founded a few years earlier by the Brazilian apostle St. Joseph of Anchieta. It arrived by boat in the port of Buenos Aires in May 1630. The image stayed a few kilometers further inland by the river, “refusing” to travel to its originally intended final destination of Santiago del Estero.

On her dark face, her eyes are big and blue. The person who loved her most and knew her from the time of the first chapel, Father Jorge María Salvaire, described her “black arched eyebrows, somewhat aquiline nose, small and recollected mouth, rosy-red and symmetrical lips, and rosy cheeks.”

The Virgin of Lujan is a prayerful image, which prays and invites to prayer.

The Virgin is annually dressed in sky blue and white, colors of the Immaculate Conception, and from her mantle, several historians conclude, the Argentine flag was born. Underneath the fabric dress with which the image is covered, which is changed every year, the carving has a blue mantle with white stars. Underneath that is a rose-red tunic.

Father Salvaire had her golden imperial crown made in France, and it bears, though they are tiny, eight coats of arms: those of Argentina, Uruguay, Paraguay, Spain, Pius IX (who, before becoming pope, prayed before her), Leo XIII (who blessed her), and the two Argentine bishops who crowned her in the 19th century.

Under the feet of the image, clouds were made that covered a crescent moon and from which the faces of four cherubs with wings emerged, as you can see in some of the replicas of the uncoated image that are on display next to the shrine.

The original image of the Virgin is kept in its shrine in Luján, erected by the initiative of Father Salvaire.

See here for various other profiles of the special images of Our Lady beloved in Latin America:

From Colombia, Our Lady of the Rosary: The miraculous story of the patroness of Colombia

From the Dominican Republic, Our Lady of Altagracia (“Highest Grace”): Why orange juice and orange sorbet should make you think of Our Lady

From Nicaragua, Immaculate Conception of El Viejo: Do you know the connection between St. Teresa of Avila, Our Lady, and Nicaragua?

From El Salvador, Our Lady of Peace of San Miguel: Mary will find her way into your life with creativity and persistence

From Ecuador, Our Lady of Quinche: When God brought a child back to life through the prayers of His Mother

From Paraguay, Our Lady of Miracles of Caacupé: No two stories of Our Lady are ever the same: A mother’s individualized love

From Chile, Our Lady of Andacollo: More marvelous than all Our Lady’s apparitions and miracles put together is this simple reality

From Peru, Our Lady of Evangelization: Do you know the first evangelist?