Joan of Arc’s spiritual life propelled her to martyrdom 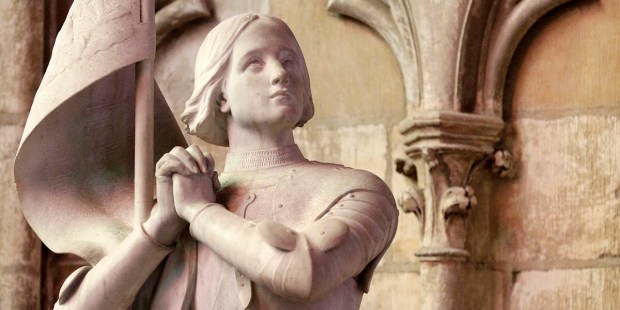 Before Joan of Arc became a soldier, she was deeply devoted to God, giving her the courage and strength she needed to endure any trial.

While many focus on St. Joan of Arc’s brave military campaigns and the unjust trial that led to her death, few recognize that before it all she was a devoted child of God. In fact, it was this deep relationship with Christ that gave her the strength she needed to endure anything.

Pope Benedict XVI explained this side of Joan in a general audience he gave in 2011. He begins by summarizing her holy childhood.

Her parents were well-off peasants, known to all as good Christians. From them she received a sound religious upbringing, considerably influenced by the spirituality of the Name of Jesus, taught by St Bernardine of Siena and spread in Europe by the Franciscans.

The Name of Mary was always associated with the Name of Jesus and thus, against the background of popular piety, Joan’s spirituality was profoundly Christocentric and Marian. From childhood, she showed great love and compassion for the poorest, the sick and all the suffering, in the dramatic context of the war.

This provided Joan with the preparation she needed for what would happen next.

We know from Joan’s own words that her religious life developed as a mystical experience from the time when she was 13 (PCon, I, p. 47-48). Through the “voice” of St Michael the Archangel, Joan felt called by the Lord to intensify her Christian life and also to commit herself in the first person to the liberation of her people. Her immediate response, her “yes,” was her vow of virginity, with a new commitment to sacramental life and to prayer: daily participation in Mass, frequent Confession and Communion and long periods of silent prayer before the Crucified One or the image of Our Lady….The young French peasant girl’s compassion and dedication in the face of her people’s suffering were intensified by her mystical relationship with God.

What is even more remarkable is how she became an evangelizing force among the French soldiers, encouraging them in the practice of the faith.

For a whole year, Joan lived with the soldiers, carrying out among them a true mission of evangelization. Many of them testified to her goodness, her courage and her extraordinary purity. She was called by all and by herself “La pucelle” (“the Maid”), that is, virgin.

Even in the midst of her unjust trial, Joan sought to maintain her love of God, “Our Saint lived prayer in the form of a continuous dialogue with the Lord who also illuminated her dialogue with the judges and gave her peace and security. She asked him with trust: ‘Sweetest God, in honour of your holy Passion, I ask you, if you love me, to show me how I must answer these men of the Church’ (PCon, I, p. 252).”

Above all, we should learn from Joan how to be faithful to God in any situation. We cannot rely on our strength, but must rely firmly on God, who will supply us with the courage we need to encounter any obstacle.

Read more:
St. Therese wrote this poem about Joan of Arc when she was tempted with atheism